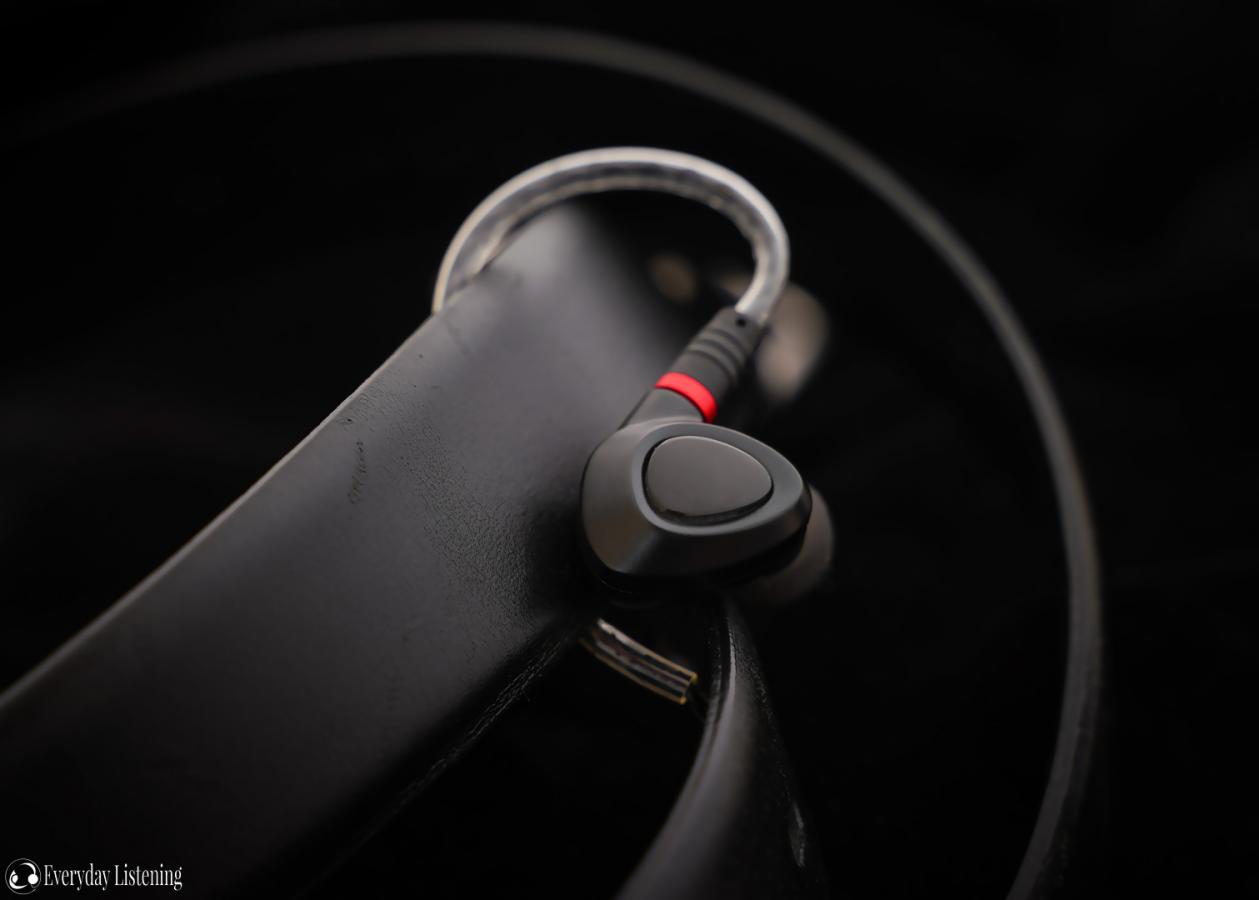 Shanling ME100 Earphone Review – The Anomaly

Shanling advertises a balanced and clean sound on their website and you can see this methodology realised in the finished product. The ME100 delivers a sound that is bright and agile counterbalanced by a modest increase in upper-bass and lower-midrange body. The result is a fairly neutral tone set to elevated clarity and crispness. Though achieving reasonable balance overall, a bias towards highs can be observed. Nonetheless, the sound is very clean and more reminiscent of a BA earphone in terms of tuning, yet it retains the natural decay that dynamic drivers are renowned for.

The earphones come packaged with a fair variety of ear tips, balanced are installed stock with the addition of bass, vocal and memory foam tips. As expected, the bass tips provide a warmer sound. Vocals become somewhat recessed and highs are also attenuated slightly. Meanwhile, mid-bass is enhanced moderately. Interestingly, the vocal tips also sound warmer and fuller within the bass and vocals also take more of a backseat than the balanced tips. That said, they sound more accurate in body and are more natural to my ear. As the high-end is retained, this provides a slightly more V-shaped signature. Sound analysis below will be using the balanced tips.

The low-end is reserved with slightly recessed sub-bass that leaves room for its neutral mid-bass to breathe. Extension is in-line with what one would expect at this price range, delivering modest rumble and a focus on tightness over slam. Interestingly, the upper-bass is slightly emphasized which extends to a portion of the lower-midrange. However, as the mid-bass isn’t emphasized, bass note size is impressively accurate and the tone is just a touch warm.

The most outstanding aspect of the ME100 is its speed. Decay is quick and each bass hit is tight. Though the earphones don’t possess much impact or slam, its low-end is agile and very well-defined for a budget dynamic, while retaining a decent sense of depth by virtue of its dynamic driver’s natural extension. Bass, therefore, showcases an above-average level of detail retrieval in addition to a clean tonality if at the cost of sub-bass presence.

Similar to a lot of Chi-Fi earphones, the ME100’s midrange resembles an incline that extends from a recessed lower-midrange through to an emphasized lower-treble. And in-line with the bass, the midrange also delivers great cleanliness with only a hint of warmth seeping in from its low-end. The ME100 has some small tweaks, however, deriving extra body from its upper-bass and the beginning of its lower-midrange. This translates to well-present vocals with slightly thin body and an inclination towards brightness and clarity over overt naturalness.

Male vocals sit slightly behind female vocals and highs, though they are presented with outstanding clarity without coming across as anaemic. As the 6KHz region has been attenuated to a fair degree, over-articulation and sibilance are mitigated, enabling a midrange presentation that is simultaneously clear, extended and reasonably smooth on top. I would not call the ME100 a linear or natural earphone, but it does represent a solid execution of the typical clear, vocal-forward sound carried by the majority of Chi-Fi earphones.

Lower-treble is forward, with a fairly significant 5KHz peak lifting the ME100’s presentation into brightness. This adds bite and aggression to its foreground detail presentation, delivering a crisp rendition of percussion, cymbals and strings. However, as the 6KHz region is attenuated, treble isn’t metallic nor is it splashy or sibilant. Treble instrumentation is well-bodied for the most part, however, it still won’t suit those searching for a dark background or clean foreground.

In particular, recordings that err on the thinner side can sound a touch strained. On the flipside, middle-treble is well-represented, the background being neither overly dark nor bright. This grants adequate headroom and the ME100 has some distinction between its layers while also having some air and a pleasing sense of openness. Upper-treble rolls off smoothly, there isn’t a lot of sparkle or micro-detail but such cannot be expected at this price.

The ME100 crafts a modestly expanded soundstage, however, it is impressively rounded. Width extends a smidge beyond the head while depth is quite impressive, granting vocals pleasing space to breathe. Imaging is average, centre image a touch diffuse and placement becomes hazy when moving lateral. Nonetheless, as the earphone has outstanding separation in all three core frequency bands, it is not hard to pinpoint details and the presentation is nicely layered.

The ME100 is easy to drive with a 16 ohm impedance and 111dB sensitivity. This makes it suitable for those with lower power portable sources. Being a single DD design, it also isn’t susceptible to output impedance issues, sounding tonally similar from both high and low impedance sources. The ME100 scales somewhat with a dedicated source, benefitting especially in terms of bass control and speed. Though it remains an impressive performer in this regard even from my Pixel 3 dongle, renowned as a very poor source, and a strength of the ME100 is how source agnostic it is.

iBasso IT01 ($100): The IT01 is more V-shaped with more recessed vocals, however, it’s midrange and high-end are shockingly similar in tuning. Nonetheless, its substantially more elevated low-end does more, to my ears, to balance out its brightness. Sub-bass is far more emphasized as is mid-bass. Extension is greater and there is much more slam and rumble. Bass is warmer and surely muddier, it isn’t as fast but it is impressively defined and almost as detailed despite its substantially larger notes. The midrange is interesting, despite having substantially more bass, the IT01 actually has similar amounts of upper-bass and the bulk of its emphasis is contained within the sub-bass. As a result, its vocals aren’t substantially warmer even if they are notably more recessed.

Still, it too has sizeable upper-midrange emphasis which permits almost the same level of clarity. The ME100 still takes home the cake in terms of clarity and transparency where the IT01 delivers a slightly more natural delivery with a slight warmth. The IT01 has the same treble emphasis’ as the ME100 and they are also of the same magnitude. However, the IT01 sounds a touch more focussed within the foreground, it is more detailed here. It also has slightly better extension with a little more air and soundstage space which is then consumed by its larger, warmer notes.

Rose Mini 2 ($100): A shockingly coherent signature for the money and a personal favourite, the Mini 2 is immediately more natural than the ME100 but also lacking the same engagement and clarity. Bass is a touch warmer on the Mini 2, derived from a slight mid-bass emphasis and pleasing linearity through the upper-bass and lower-midrange. On the contrary, it doesn’t have nearly the same sub-bass extension as the ME100, lacking rumble and power by comparison. It also isn’t as textured or defined. The Rose Mini 2 has an almost spot-on midrange in terms of timbre and just as lightly warm tone that sounds delightfully natural.

Meanwhile, the ME100 has a lot more clarity, making the Mini 2 sound flat and lifeless by comparison. It does so without sacrificing body, but the ME100’s sound does lack some density in comparison to the Mini 2. The ME100 has a more detailed treble and it is more aggressively presented. The Mini 2 has a small lower-treble bump, however, it lies on the smoother side otherwise. The ME100 is clearly more detailed and more extended, an easy victory in terms of technicality. However, the Mini 2 still presents the more balanced, linear and accurate sound even if it is less resolving in essentially every regard.

Shanling ME500 Platinum ($299): The ME500 Platinum is a logical progression from the ME100, offering more end to end extension, a more linear midrange and high-end in addition to a healthy boost in technical performance. Otherwise, it is a very familiar experience, being clean, slightly bright and clear. Bass immediately has more depth, with more sub-bass extension and considerably more emphasis, delivering more slam and rumble. Meanwhile, delegating higher frequencies to 2 additional BA drivers sees greater control from the 10mm bass driver. The ME500 provides similar mid-bass quantity but is more linear through the upper-bass. As such, it is slightly cleaner and more defined.

This quality continues into the midrange where the ME500 is slightly more transparent and it has less upper-midrange emphasis where the ME100 is more sculpted to compensate for its greater upper-bass warmth. The result is a denser, smoother and more refined vocal presentation that doesn’t sound as dry and thin as the ME100 while retaining similar vocal presence. The ME500 also has a slightly smoother top-end, it is immediately more detailed and it has a much cleaner background. It also has immediately improved extension, offering a considerably larger soundstage with more defined layers.

A noble first effort from Shanling and a very intriguing tuning, the ME100 excels in the qualities of clarity, comfort and separation. On the flipside, those wanting warm, natural or hyper-technical sound will want to look elsewhere. It’s also worth mentioning that the ME100 is shockingly similar to the immensely popular iBasso IT01; and though I will make no claims here, it also presents many of the same strengths as that model. However, the vast difference in bass tuning does shed light upon Shanling’s individual approach and, therefore, it presents as a distinctly unique product. The ME100, therefore, presents as a great alternative for those who found the IT01’s bass overwhelming, albeit at risk of swinging too far the other way. Ultimately, Shaling’s first earphone is a well-realised product with excellent ergonomics, build quality and a sound that is competitive in a competitive market.

Buy the Shanling ME100 on Amazon.com