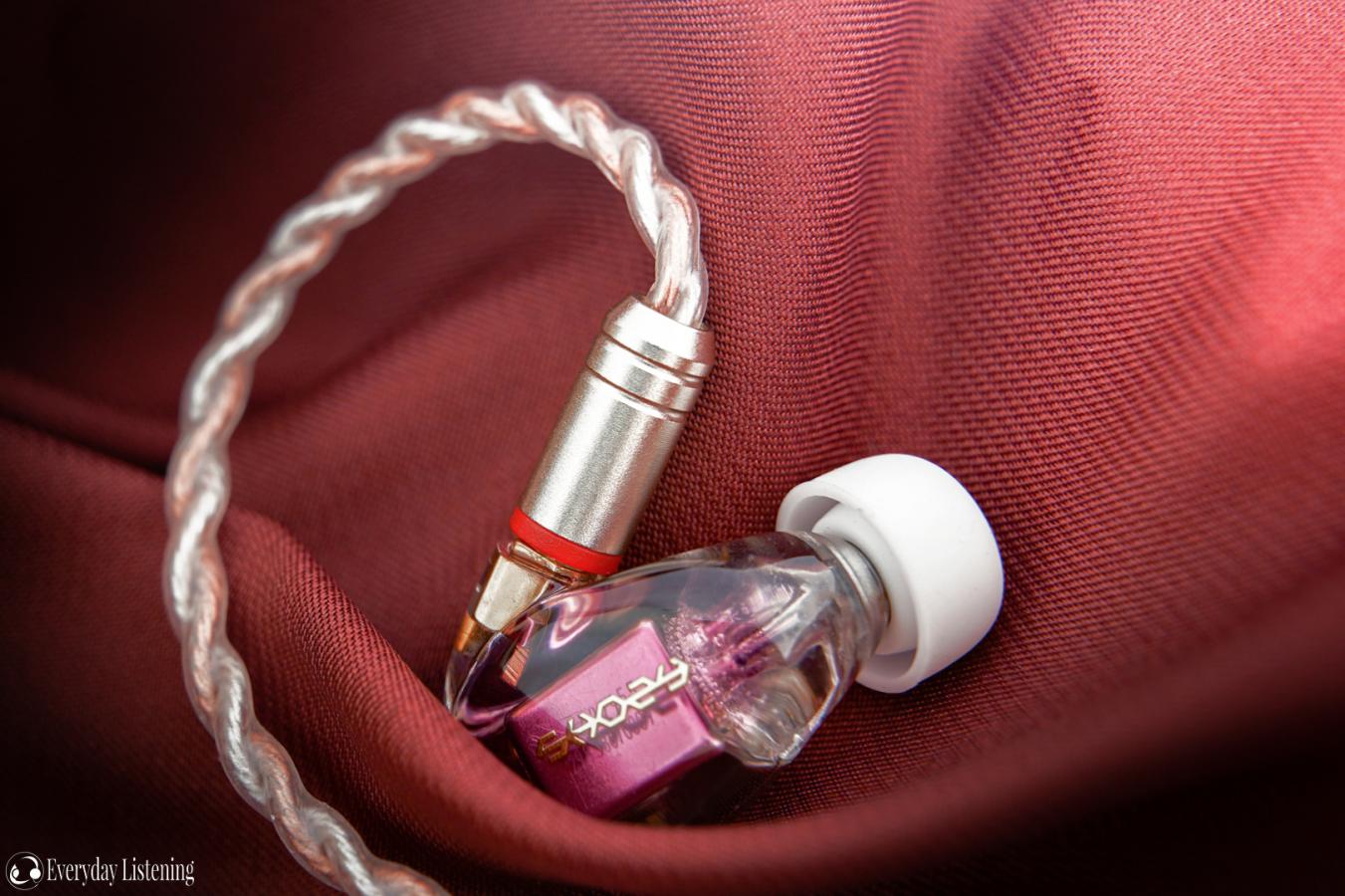 Upon first listen, the CP provided a natural, balanced and impressively linear sound. Interestingly, it is also more linear than its pricier sibling if sacrificing some technical ability. Bass is slightly warm and feeds naturally into the lower-midrange to provide accurate body and separation. The earphones have a very linear midrange that climbs to a slight 3KHz prominence before a modest dip in the upper-midrange that provides a smooth and dense vocal presentation. The lower-treble is well-positioned while the middle-treble has a small rise for air and headroom.

Overall, a very coherent and natural tuning that lies on the slightly smoother and fuller side. The earphones also possess a modular filter system with an additional pair of filters included. The alternative filters are slightly more attenuating, providing a warmer, smoother sound. Meanwhile, the earphones can be listened to without filters (though the tips are more prone to falling off) which provides a hair more treble clarity but also affected the midrange timbre too much for my liking. As such, I most prefered the stock filters and used them for the remainder of my review.

Dynamics are a prime focus for Shozy and this is embodied in the CP’s low-end. Lows extend nicely, evidently not to the depth of a dynamic driver earphone, but rumble and slam are well-present and tight. Mid-bass possesses subtle emphasis instigating a light warmth that continues through but never obscures the midrange. Meanwhile, upper-bass sits neutrally, sloping gradually into a small lower-midrange dip that retains separation and cleanliness.

As expected, control is high as is detail retrieval. Though notes are pleasantly full and tone is on the warmer side, bass remains well-defined if not possessing the highest detail retrieval on the market. This is so similar to the BG, with decay being slightly longer than usual for a BA earphone, granting the CP a more natural timbre than most earphones with similar tuning. This also grants sub-bass a certain weight that the majority of cheaper BA earphones don’t attain.

Smooth, delicate and articulate, the CP’s the midrange is surely a highlight of this earphone and the price category it sits in. Mids feed linearly from the bass with a small lower-midrange dip redeeming separation and mitigating muffle. As a result, the midrange has accurate body and very slight warmth. As the centre midrange is well-positioned, vocals are well-balanced between male and female in addition to boasting accurate size and intimacy. Due to a 4 kHz dip combined with a neutral lower-treble, vocals are dense, smooth and well-articulated.

This can make them sound slightly flat by comparison to clarity-enhanced models, however, not a hint of veil, muffle or muddiness is apparent here due to their linearity elsewhere. Rather, the CP offers outstanding vocal timbre with just a slight enhancement of body and smoothness. Female vocal extension is slightly truncated as the upper-midrange is slightly dark without compensation in the treble. However, the midrange showcases high levels of definition and balance otherwise. The CP is easily among the most natural earphones I’ve tested, a great achievement at $165.

With regards to comparison to the BG, the same can be said within the high-end as with the midrange; the CP is more linear and neutral in its voicing. This is especially noticeable within the lower-treble that is impressively neutral in quantity. As such, the earphone meticulously balances crisp percussion with ample instrument body and just slightly shorter decay to produce a well-detailed yet not overzealous foreground. Meanwhile, the middle-treble has been slightly enhanced, granting an open soundscape and pleasing air. The CP is, overall, neither bright nor dark which a fine quality to possess.

Of course, the level of extension and headroom abundantly apparent on the pricier BG is not present here, with the CP’s presentation sounding flatter and less obviously layered. That said, though upper-treble isn’t overly present, and sparkle is minimal, it’s clear that this is a tuning decision and there is relatively strong extension due to the level of resolution and background detail retrieval at play. Its resolving power is especially strong through the foreground but there is ample micro and background detail to provide dimension to its presentation.

Featuring strong extension and a well-positioned background, the CP provides convincing soundstage space. Width is especially impressive, stretching beyond the head by a fair margin while depth is more intimate despite vocals being well-present. Centre image is strong and imaging is sound but the CP has a tendency to push instruments further to the side than usual. Layering is defined though the earphone errs more on the side of coherence over hyper-separation. Similarly, separation is consistent and strong throughout, though not as hyper-defined as some sharper or cooler earphones such as Shozy’s own BG.

With a 107dB sensitivity and medium 30ohm impedance, the CP is efficient enough to reach high listening volumes from portable sources while also resisting hiss and the effects of higher output impedance. This makes it a great choice for smartphone listeners even if most won’t receive the same level of detail and soundstage expansion of a dedicated DAP. Most notably, from the 10-ohm Hiby R6 as opposed to the 1-ohm Shanling M2X, the CP sounded slightly darker with less upper-midrange presence and air.

TFZ King Pro ($169): The King Pro is a more vivid earphone with a brighter and more W-shaped sound. It has substantially more sub and mid-bass in addition to stronger extension, delivering considerably more slam and rumble. Its upper-bass and lower-midrange are more recessed so though it has larger bass notes, its tone isn’t warmer. The CP has faster decay and more control, retrieving more detail and it is more defined at the cost of dynamics and presence. Through the midrange, the King Pro is more female vocal biased and substantially brighter. It has more upper-midrange extension but also sounds considerably less linear as its tuning would suggest. That said, as its bass is fuller, its midrange sounds even slightly full-bodied in addition to being clean in tone.

However, as it is less linear, it is much more track dependent than the CP that sounds consistently well-balanced and accurate. The King Pro also has more treble presence, its lower-treble is actually smoother, which keeps its forward upper-midrange smooth. Meanwhile, its main emphasis lies in the middle-treble, granting it more air than the CP but also more overt brightness. Its instruments sound thinner and more brittle though detail presence is greater. The Kind Pro has a slightly larger soundstage to the detriment of layering and imaging. It has a touch more energy in its highest octave that contributes to this impression.

Oriolus Finschi ($179): The Finschi is a more V-shaped but its sound is executed with similar mastery. Immediately, the Finschi has more sub-bass extension and substantially more present, delivering significantly more slam and more visceral rumble. Its mid-bass continues trend while its upper-bass is slightly less present as is its lower-midrange in order to retain bass/midrange separation. The Finschi is warmer and though it has high-driver control, it decays slower and lacks the same definition and detail retrieval. The Finschi has a small push through the centre midrange combined with a smoother upper-midrange similar to the CP. As its bass is considerably more present, the Finschi is well-bodied and its midrange poses a lightly warm tone throughout. The Finschi possesses slightly more vocal clarity than the CP which prevents its considerably more laid-back vocals from becoming overshadowed.

Though its timbre isn’t as natural as the CP, being slightly over-articulated with a slight thinness seeping into male vocals derived from its less present lower-midrange, the Finschi does admirably for a V-shaped earphone. A lot of its clarity is derived from its lower-treble that has a reasonably large peak. As such, the Finschi is a much crisper earphone than the CP even though its detail retrieval is similar overall. The Finschi lacks the same air and background detail presence of the CP as its background is very dark. It still retains some background information as it has a small bump in the upper-treble so its presentation has defined layers if lacking the coherence and dimension of the CP. The CP has a wider soundstage while the Finschi has more depth.

Shozy BG ($279): The BG offers a more W-shaped sound executed with similar levels of overall balance. It is the more vivid and engaging of the two with enhanced end to end extension. Bass has a touch more extension and sub-bass presence. It has more heft and power though overall, lows are slightly less present due to the BG’s more present mids and highs. As such, the BG’s tone is more neutral and it upholds a cleaner presentation. This continues through the midrange where the BG has more vocals presence, definition and clarity but also a less natural timbre due to its twin centre midrange peaks. The BG has more articulation on behalf of its emphasized lower-treble though this is well controlled by a similar upper-midrange dip, yielding a smooth and dense presentation if one that is brighter and thinner overall.

The BG has significantly more going on in the high-end and its more present lower and middle-treble tip it more conclusively into the territory of brightness. That said, detail presence is largely enhanced both in the foreground and background. However, similar to the midrange, it sounds thinner and slightly less natural than the smoother CP. The upper-treble is also more present and sparkle is more present, delivering a larger soundstage and greater sparkle. Treble overall has more headroom, air and energy than the CP, the BG sounds more dynamic and spacious where the CP is more compressed but also more natural and linear.

When the BG came through the review room, I was shocked by its treble extension and resolving power that, frankly, had no place on an earphone that affordable. The CP almost makes a mockery of that impression, introducing a more natural and linear signature realised through the same foundational elements as the BG. That said, the price cut does come with a noticeable reduction in resolving power coming from its pricier sibling, however, it does retain much of the same magic, most notably, an impressively wide soundstage. This is instrumental to the CP’s balance between engagement and coherence, as it prevents the CP’s slightly warmer and smoother sound from becoming congested or uninvolving. This is an earphone priced within the more affordable facets of the modern market that remains insightful and has the courage to provide a sound that is natural in all-respects natural and never blasé. Bravo Shozy, these earphones are quite something!