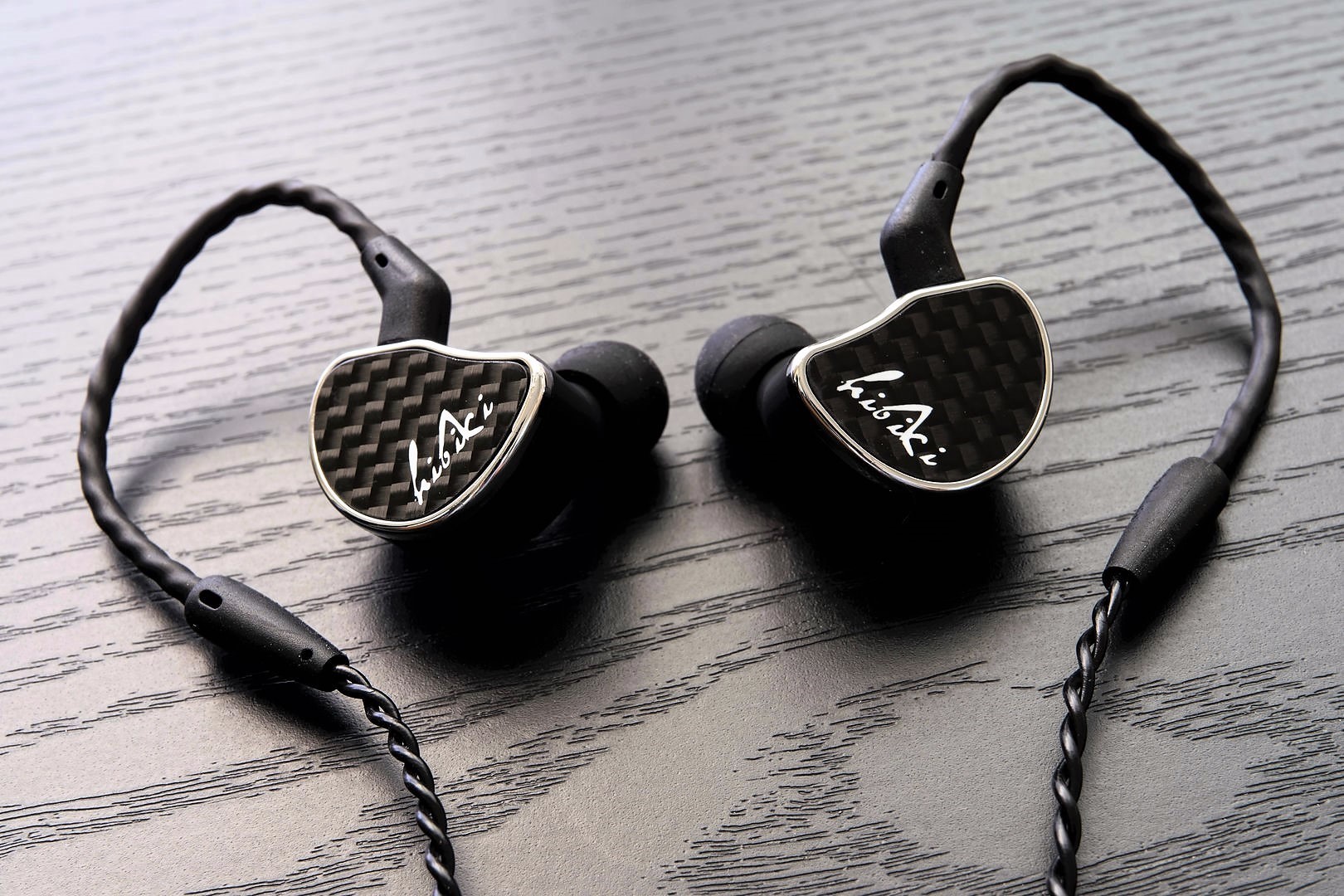 The Hibiki is a bright, mid-forward earphone with an ethereal sound that embodies the more typical Asian style of tuning. Bass is a bit reserved but defined and taught, well complementing the higher frequencies, and vocals possess satisfying immediacy. Highs are also slightly forward but what the Hibiki lacks in depth, they make up for with air and speed. And while this style of tuning will not suit every listener, the Hibiki provides a surprisingly mature example of an upper midrange focussed tonality that is rather uncommon around this price range. As such, it’s a nice change from the usual warm, smooth earphones and energetic V-shaped models from manufacturers like TFZ, Klipsch and 1More to name a few.

Bass forms the foundation of any great earphone but all too often it drives the sound of cheaper earphones rather than integrating into it; you would have to pay a fair sum to achieve truly exquisite balance between frequencies. On that note, if you want to relish in a rich, organic bass response, Shozy will likely disappoint. Because the Hibiki is on the conservative side in its low-end quantity, prioritizing definition and agility over impact and warmth. Bass is depth focussed and very pleasing in quality though it sits a fair way behind the midrange in emphasis. This weighting imbues bass notes with a slightly larger sense of body that prevents the earphones from coming off as anaemic though they are still not a particularly full sounding in-ear, especially when compared to competing models like the Final E2000/3000. Furthermore, extension is just above average, the single dynamic driver Hibiki creates a light but incredibly tight sub-bass impact with clearly defined rumble somewhat akin to the Hifiman RE-600.

This is followed by a more neutral mid-bass and recessed upper-bass that contribute to the cleanliness of the Hibiki’s overall presentation. And though mid and upper bass sit a bit too far behind in the mix, texturing and definition is excellent. When listening to Toto’s “Rosanna”, the Hibiki provided excellent PRAT that easily bested the fuller but sloppier Final E2000 and the slightly muddier Fiio EX1 2ndGen. So despite their price, the earphones are devoid of bloat or bloom. On tracks with a more separated bass response like the Pixie’s “Hey”, the Hibiki thoroughly impresses with spot on body and exquisite bass clarity that makes other earphones sound downright veiled. However, during most songs, the midrange spills over bass details which will probably bother a lot of listeners. That said, a bass-driven sound was never Shozy’s intention and this does leave the midrange, the focus of the sound, delightfully concentrated and uncoloured; the tuning will be a matter of taste, the quality is absolute.

Mids are the centre of attention as the most emphasized aspect of the Hibiki’s sound. Upon first listen, their huge clarity and thinner body can sound a little unnatural, but a brief adjustment period reveals an exceptionally open, resolving midrange. Mids carry a brighter tonal tilt with upper mids holding the most authority in the entire sound, though lower mids are balanced and clear with pleasing quality throughout. Again, these won’t suit those looking for warmth or a perfectly natural response, but the Hibiki does flatter the smoother mastering of Asian albums and really brings out the detail in older tracks. For instance, when listening to Akdong Musician’s “Anyway”, the Hibiki was lacking that organic richness to acoustic guitars on account of their reserved bass response, but vocals were delightfully delicate and guitars very crisp and clean. On a whole, vocals were still too thin for my liking but voicing was well considered so singers never came across as nasal or raspy.

Unfortunately, this style of tuning also exacerbates sibilance but these frequencies are never pushed to fatigue and the Hibiki isn’t too hard on lower bitrate files on account of their smoother treble response. Their highly resolving nature also does so much to enhance midrange elements that these concerns are soon forgotten. A culmination of brightness, clarity and pleasing resolution all contribute to the revealing nature of the Hibiki’s midrange. Vocals are layered and extend with an effortless quality, and instruments such as piano are almost lifelike in their immediacy. As an acoustic guitar player, I also enjoyed the Hibiki’s hyper clear presentation of strings even if instrument timbre isn’t overly natural. Of course, the Hibiki’s won’t be replacing my pricier in-ears but considering their asking price, they offer a nice alternative to the darker, more full-bodied Zero and E2000 while competing eye to eye with the similarly bright EX1 2ndGen.

Treble is an interesting affair, high frequencies are well presented, clear and smooth for the most part, though the Hibiki is missing some technicality at times. It’s very possible that this was a conscious tuning choice on Shozy’s behalf; the Hibiki has a slight lower treble dip that prevents high frequencies from overwhelming, since they are already quite a forward sounding earphone. However, this is followed by a subsequent rise into middle treble frequencies that imbues their sound with some extra sparkle and air. As a result, I would hesitate to call the Hibiki a laid-back earphone since higher frequencies hold plenty of emphasis in the sound, but they are lacking some bite and aggression due to the unevenness of their tuning. It is a fine balance between energy and fatigue but I did find the Hibiki to be a little too sedate for my liking. Still, the Hibiki is very crisp and clear, they also lack that spiked sound that a lot of more aggressive earphones possess, erring on the side of refinement over engagement.

The Hibiki is well extended but both the Final E2000 and Fiio EX1 2ndGen possess greater resolution of higher details. Lower treble instruments such as cymbals are well textured but higher elements, though granted with plenty of shimmer and sparkle, are too thin to resolve like the best. Furthermore, their enhanced sense of air does a lot to mitigate the effects of their early roll-off though instruments such as strings and high-hats don’t quite extend and resonate like they should. Detailing is also pretty mediocre, they gloss over some finer details even if those that are resolved are presented in a clear and clean manner. So ultimately, the high frequencies are pleasing but they’re definitely the weakest aspect of the Hibiki’s sound. Competing in-ears around the same price may not possess the same midrange expression as the Hibiki but a few notable models are notably more nuanced.

The Hibiki’s clean, revealing sound is counterbalanced by its constant forwardness creating a nice but not outstanding soundstage presentation. Width is especially good, the earphones can stretch to the periphery of the head with the right track though depth is intimate. The Hibiki performs well amongst similarly priced sealed in-ears like Shozy’s own Zero and the Meze 11 Neo though the semi-open Fiio EX1 2nd Gen and Final E-series earphones all provide considerably larger soundscapes at the cost of isolation. Imaging is very good, they position better the vast majority of in-ears around this price due to their agile, revealing nature. Separation is very commendable in some aspects but not quite flawless overall. For instance, mids are spacious and exceptionally well-extended though they can spill into the other frequencies which overshadows details. By comparison, the more balanced, more spacious Final E2000 and Fiio EX1 2nd Gen both separate more consistently though the Hibiki never comes across as congested due to their open, airy presentation.

The Hibiki was designed as a commuter’s earphone with a higher 102dB sensitivity and lower 18ohm impedance making it well suited towards smartphone use. The Hibiki is certainly an easy earphone to drive, achieving dangerous volumes from any modest smart device. And utilizing a single dynamic driver, the Hibiki is also very resistant to output impedance, sounding quite tonally similar from both my phone and Fiio X7 II. That said, the Hibiki does benefit on some level from a dedicated source, for instance, they sounded smoother in their midrange and more detailed in their treble from my Alien+ as compared to my iPod Touch 6G. That said, the Hibiki doesn’t scale like the more technical in-ears around this price though they also actualise more of their potential from a smartphone. While it is disappointing that the Hibiki doesn’t scale up at home, it is very well suited towards its intended uses and price range.