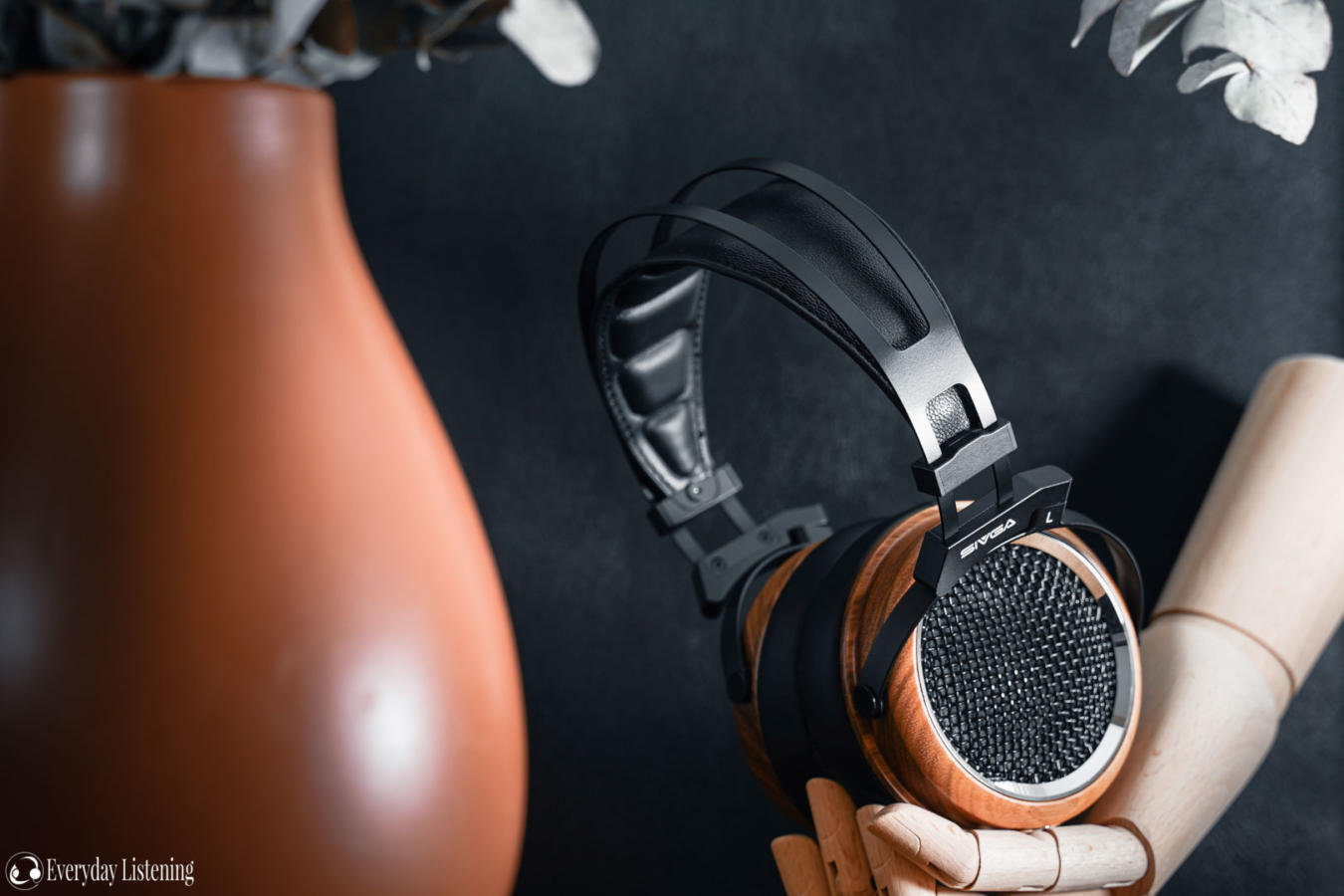 As audio enthusiasts, I feel we have a tendency to demonise bass emphasis. I personally feel it is best to consider personal preference here and to judge tonality on a case by case basis. For the Phoenix is a warm, rich and slightly bass-orientated headphone yet also an articulate and charming one. This also makes it quite unconventional for an open-back. Nevertheless, it retains modest balance overall, with a subtle L-shape, bringing the vocal range forward with some upper-midrange emphasis alongside a crisp lower-treble in equal measure. I would not consider this to be an especially high-contrast sound with a generally warmer and fuller expression instigated by its robust bass of which mid-bass steals the show, being most prominent in the sound. There’s a moderate dip entering the midrange for separation before a gentle rise to a small 3kHz hump that brings vocals forward and enhances their clarity. The treble is reasonably even with a small lower-treble peak enhancing articulation and detail presence. Altogether, a coloured yet involving sound that doesn’t sacrifice too much balance.

Sivga’s upgraded earpads offer a strong sealing shape and pleather construction which impacts the sound. Swapping to the upgrade pads, I noticed a more bass forward sound with a more laid-back midrange. As emphasis appears to be mostly within the sub/deep-bass rather than the mid-bass, bloat is not exacerbated. However, I did find these pads to sound less coherent than the stock units, as bass became a bit boomier and less defined. In return, you do receive a more pressurized and hard-hitting low-end that generally draws more focus. The midrange was more recessed but also higher-contrast with enhanced clarity. The stock pads were more natural to my ear in addition to being more balanced. The high-end appeared relatively unchanged and I didn’t hear a large difference in terms of soundstage either. However, the further increase in bass quantity and more laid-back midrange are something to consider if you currently enjoy the sonic balance but would like more spacious ear pads.

The low-end draws attention with its size and power forming the foundation of a fun and engaging sound. It has a clear bias towards the mid-bass, though the sub-bass still provides commanding presence with a satisfying slam and pressure enabled by impressively strong extension, especially for an open-back headphone. Rumble is clearly defined though impact could be more focused. The mid-bass has a moderate hump instigating a punchy, full and warm low-end presentation with a heavier note weight. There’s a gentle slope downwards through the upper-bass and lower-midrange that redeems separation and prevents excess bass spill. Bass itself isn’t bloated to my ears, but notes are clearly enlarged and full which can sap definition on some tracks.

The note presentation as well goes hand in hand with the tuning, being smooth whilst upholding decent speed to retain definition and separation. Sub-bass attack is slightly more diffuse despite the hearty increase in note weight so slam doesn’t pound the skull and the bass is characterised by a smoother texture overall. I see this as a positive, preventing the headphone from becoming overly fatiguing and bass dominated. Mid-bass control is a standout performer, being a bit quicker than the sub-bass and delivering impressive tightness and definition. There isn’t a huge amount of separation due to its fullness though a nice, natural decay enables a presentation that is well-textured, lush and easy to appreciate. Surely compared to some planar competitors, the Phoenix is not quite as agile and defined, but brings its own unique qualities here that reward in equal measure.

Relative to the bass, mids occupy a slightly laid-back position though they remain far from veiled or recessed. Considering its bass tuning, the Phoenix has good extension and openness alongside impressively strong note definition. Though do note that separation and definition are not a defining feature of this headphone, which is more characterised by its lushness enabled by its generally warmer and full-bodied character. In turn, it has a rich, filled-in note structure without a hint of dryness whilst maintaining good, if not great separation. There remains as well, admirable balance between male and female vocals. However, instruments do sound more obviously coloured to my ears, being richer, warmer and also slightly more laid-back. Nonetheless, they sound organic and not over-done in terms of colouration which might be to your preferences. Vocals, however, really steal the show, being empowered with a more forward position, sitting just behind the bass.

They possess enhanced clarity and articulation on behalf of the upper-midrange and lower-treble tuning. Accordingly, the vocal presentation is glossy and clear if a touch raspy at times, though also never thin or sharp with the headphone’s rich warmth and body acting as ballast. I find vocals to strike a good balance, they aren’t too intimate or peaky, similarly, not especially prone to muffle or chestiness due to the small lower-mid dip. The midrange on a whole upholds a respectable amount of cleanliness and a natural voicing with its progressive emphasis. Though this remains a clearly coloured sound, linearity was never the intention and I feel the tuning is well-considered for a bass-orientated headphone. It is not so easy to come by a headphone that provides richness and clarity in equal measure and executes this in such a natural fashion, especially within this price range.

The Phoenix provides a crisp and energetic high-end expression that lifts its presentation and enhances its atmosphere. Focus centres around a small peak just above the lower-treble that grants treble instrumentation with a lighter note weight and provides the impression of a more sparkly and separated performance. Regardless, there is good texture here alongside ample body to retain a mostly natural presentation altogether, although this is clearly not the Phoenix’s priority here as body remains clearly on the thinner side. Rather, the small emphasis permits treble details to cut through its otherwise thicker voicing, enhancing intelligibility and fine detail retrieval. The Phoenix is far from the most detailed headphone I’ve heard but provides a satisfying combination of focus and clarity here and, much like the midrange, does so sans sharpness and fatigue.

To reiterate, this is not a bright headphone but a slightly more open sounding one, a well-considered tuning decision given its lusher sound below. It has average detail retrieval in-class but details are more apparent given its slightly more energetic tuning. Extension as well never feels lacking though it too is clearly not on the level of a higher-end model with minimal micro-detail and sparkle in its top-octave. The Phoenix nonetheless, provides a distinct foreground and background, creating a nicely layered presentation with good cleanliness that draws further focus to its energetic foreground detail presentation. Despite this, it also has a good amount of air due to the small middle-treble peak and its stronger headroom surely works much to its advantage in crafting the impression of overall balance and continuity.

Despite not being outstanding from an extension and detail retrieval point of view, the soundstage is impressively expansive, especially considering its slightly less-open form factor. The Phoenix offers a good combination of out of the head width and impressive depth too, providing a slightly oval presentation. It’s no HD800 but never feels remotely closed in either. Imaging is a good performer as well with a defined centre image and reasonably sharp directional cues.

Like most headphones in this price range, it offers a nice lateral spread with an emphasis on organised, defined layers, but little ability to accurately project coronally besides lead vocals. Still, this makes for an involving presentation that is clearly above the average headphone. Separation is a weaker point of this headphone, not a poor performer, but certainly not outstanding either due to its generally lusher presentation. It errs on the rich and coherent side over being separated and highly-defined but has a little added contrast that prevents congestion.

With a 32-ohm impedance and 103dB sensitivity, the Phoenix was designed to be easy to drive. Being an over-ear headphone, it also isn’t especially sensitive to source noise. As always, the numbers do not tell the full story with regards to driveability.

I would estimate that the Phoenix has a fairly flat impedance curve given that there were minimal audible differences between the Hiby R6 (10-ohms) and Shanling M2X (1-ohm). Subtle differences were discernible between the sources though likely this is due to the colouration of the sources themselves. This means a low-output impedance is not required to provide a sound faithful to the company’s design and the Phoenix can be enjoyed from high-impedance sources such as tube amplifiers.

Switching between my desktop stack with THX789 and Topping D70s with the Shanling M2X revealed that the Phoenix does scale nicely with better sources. The M2X did an admirable job driving the Phoenix, in fact, bass extension was about the same as was overall frequency balance. The Phoenix even sounded balanced from my Xperia 5 II’s integrated headphone jack and no noise was perceptible on any of these sources. That said, the desktop source clearly sounded the best, the transient response was noticeably sharper, with higher note definition from bass to treble. It was more detailed and focused but there wasn’t a huge change in sub-bass power or overall balance. In addition, the desktop stack provided a more spacious soundstage though not by a huge degree.

The Phoenix is indeed easy to drive as promised by the company both with regards to power and output impedance. Though it does thrive with a bit more power, aiding a more detailed and defined presentation. In my testing, the Phoenix is best paired with a neutral to analytical source due to its smooth and lush nature. Warmer and smoother sources may overly blunt its presentation. My personal preference is for a more detailed source with a sharp transient response such as the iBasso DX200 with AMP5 which provided the more defined and textured sound.