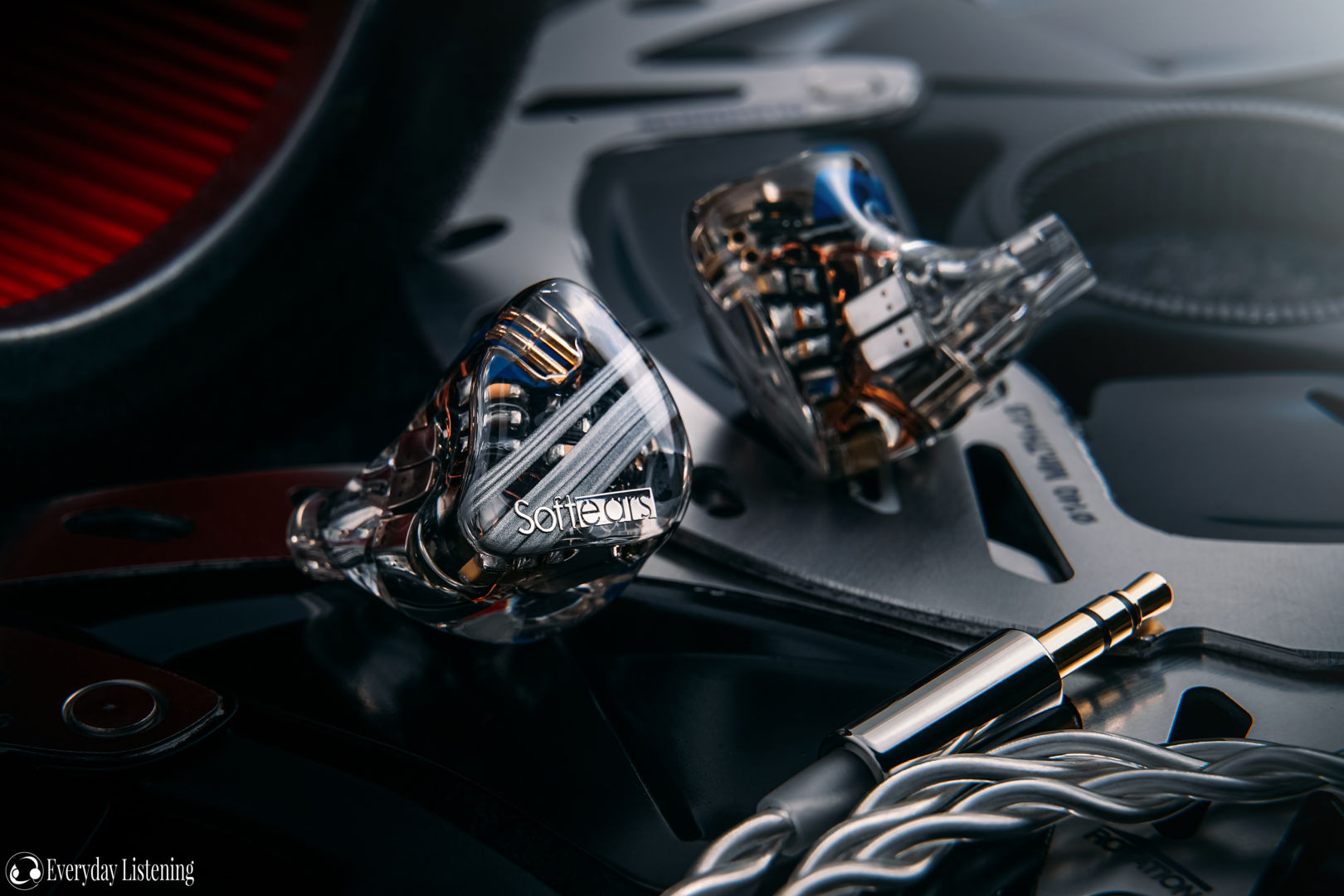 Testing Methodology: Measured using Arta via IEC 711 coupler to Startech external sound card. 7-9KHz peaks may be artefacts/emphasised due to my measurement setup, less so with deep fit. Measurements besides channel balance are volume matched at 1KHz. Fit depth normalised to my best abilities to reduce coupler resonance. Still, due to these factors, my measurements may not accurately reflect the earphone or measurements taken by others.

The RS10 is about as linear as an upgrade as one can get in relation to the RSV and the lower Moondrop options such as the Variations. This earphone epitomises linearity and timbral accuracy, in turn, expect a little less sub-bass oomph than the RSV and Variations, nor much warmth and euphony overall. The RS10 is defined by surgical control throughout, excellent definition and a faithful representation of music in almost perfect balance. Despite this, the RS10 leverages profound technical ability, able to engage the listener with its ability to effortless finesse micro-details from complex tracks. There are 2 chief areas of colouration, that being the small bass shelf and small upper-mid hump. I feel both are in good taste as they are very small in the order of 2dB or so. Compared to a pure DF-neutral IEM like those from Etymotic, you will notice a little less separation in the bass. However, those earphones are quite unforgiving, the RS10 being more versatile.

At a surface level, the bass performance is what can be most appreciated on the RS10 and this applies both to its tuning and its technical performance. This is a splendid combination between a clean sub-bass boost that doesn’t over colour the linear, hugely textured mid-bass and timing that would please a metronome. Extension is exceptional for a BA monitor; it has great slam and even a tight, satisfying pressure at the very bottom. Most impressive the is the quality of the sub-bass, very rarely do you hear such a defined and controlled rumble. While the note presentation means this won’t be mistaken for a DD earphone, I never felt slam, power or rumble were missing in the slightest. The note timbre is also highly accurate with a dead neutral tone. Note size is a touch enhanced and notes are emboldened due to the sub-bass tuning, though tasteful levels of emphasis ensure muddiness is absent entirely. The RS10 is a paragon of finesse and precision with regards to its bass quality too.

Attack is quick and concise whilst decay is a touch longer than your usual BA earphone. Note definition on a whole performs at the highest level which, alongside its extension and linear tuning, means you get unyielding resolving power of minutiae throughout the entire low end. Due to these properties, the sub-bass lift doesn’t overly affect separation and the earphone is able to upholds perfect composure on the most complex tracks. Naturally, earphones with zero bass emphasis do have a small advantage here, but to reiterate, this is hardly a con on the RS10. In addition, its notes are well-bodied and textured forming one of the most articulate and responsive low ends I’ve heard. The RS10 has a winning combination of quality and wicked clean tuning that will find wide appeal. The best dynamic driver earphones sound a bit more visceral and powerful at the very bottom, perhaps a lick more textured in the mid-bass. However, the RS10 is an outlier when it comes to both timbre and detail retrieval, getting amazingly close from a lightning-fast all-BA setup.

Unsurprisingly, a similar impression is to be had with regards to the midrange. While the bass performance is easier to appreciate, it is the midrange that truly excels under scrutiny. For the RS10 is defined by its top-level tonal transparency and superbly even-handed voicing that flatters all genres and frequency ranges equally. The voicing is highly natural, and its timbre leaves basically nothing to be wanted in terms of consistency between mastering styles. The only colouration in sight is a lick of upper-midrange emphasis in the realm of a handful of dB around 4 kHz. This contributes to a slightly more revealing sound and brings vocals a touch forward. Due the linearity of its sound below in conjunction with a seamless bass/midrange transition, I didn’t find this to introduce strain, dryness or thinness. That said, this means the RS10 does sound a touch forward and some intensity can be heard at times, especially with regards to vocals.

This will not be to everyone’s tastes, but I found the small emphasis to be innocuous enough not to harm the RS10’s versatility. Certain tips such as Spinfits can also be employed to attenuate this region slightly to preference. Besides this, the RS10 is a truly stellar performer in all regards that easily hangs with the best. Midrange resolution especially is among the best I’ve heard. While the tonality surely contributes to its discerning nature due to its exceptional cleanliness, separation and clarity, the RS10 goes beyond the surface level with incredibly apparent and well-resolved fine details. For instance, listening to Billie Eilish’s “bad guy”, rarely do you hear a monitor that discerns vocal harmonisations and, as strange as it may seem, mouth sounds like the RS10. It is able to surgically deconstruct the most complex tracks and capture the underlying emotion with a rendition that pays tribute to both artist and producer.

With a tuning so similar to the lower-end RSV and Moondrop models (that I similarly lauded for its linearity), the difference lies in the RS10’s far more resolved background detail presentation that adds layers, space and overall immersion. This is in addition to its far superior ability to capture small details in the foreground. The RS10’s delivery simply sounds cleaner and more effortless. It’s a very natural step up in terms of technical ability with minimal tonal colouration. Treble is no more forward, but small details are simply more apparent and easier to discern, each note having superior separation and definition. The dead even, even slightly smoother lower-treble tuning ensures note body remains accurate and instruments are richly textured and delivered with a realistic timbre. Indeed, note attack is sharp and decay is a touch faster than neutral, but never truncated. Notes are beautifully constructed, well-considered from both a frequency and time response POV. In so doing, the RS10 lacks any semblance of brittleness whilst retrieving details extraordinarily well.

To sum it up, the RS10 is a versatility specialist, representing all mastering styles and genres of music faithfully. The background is jet black and spotless, though even then, background details shine through clearly with excellent extension and resolution. This contributes to a hugely layered presentation that retains a good amount of air and headroom. While sparkle isn’t highlighted, strong extension ensures micro-details remain well apparent. The RS10 operates at a high level here, but it is clear this is not a focus of this earphone, prioritising timbre and organisation which are more useful, even desirable in a professional setting. In turn, this does mean Soft Ear’s reference flagship doesn’t provide the instantly gratifying, high-energy presentation of something like the Fir M4 of Campfire Audio’s high-end monitors. The RS10 prioritises linearity and a super detail-dense foreground over flaunting huge sparkle and overt spaciousness but maintains the enthralling resolution and spatial characteristics one would expect from a high-end IEM.

The RS10 has a modestly sized soundstage emphasizing focused, hyper-accurate imaging over overt space and immersion. Nonetheless, I never felt it was a limiting factor of this earphone. Width stretches just beyond the periphery of the head as does depth, forming a nicely rounded stage with a pleasing sense of dimension. Imaging is the highlight here, being ultra-stable and highly cohesive. The centre image serves as a rock solid anchor for a highly layered lateral and coronal spread. In addition, layers are defined and well-delineated. Accordingly, the RS10 has pinpoint accurate localisation and its resolving treble means directional cues from through perfectly clearly no matter how complex the track. Its composition does mean it lacks that ethereal, floaty character achieved by more coloured monitors. Still, while not quite holographic due to its darker background, the RS10 is reasonably multi-dimensional. Separation is another high point and cannot be faulted. It is resolving throughout and the sub-bass emphasis is in great taste so as not to encroach upon the mid-bass. If there’s one defining trait of the RS10, that would be its ability to equally flatter every element in the stage, in so doing, fine details are apparent as nothing is overshadowed.

The RS10 sports a 25 Ohm impedance and a 100dB sensitivity making it far less efficient than your typical all-BA IEM. Indeed, this one requires additional juice to achieve regular listening volumes. However, to simplify things, it does have an almost linear impedance curve meaning output impedance shouldn’t affect its frequency response.

Switching between the Hiby R6 (10-ohms) and Shanling M2X (1-ohm) revealed minimal shift in tonality besides colouration of the sources themselves. This is a great asset for the RS10 as it means you can run it off a wider range of sources and achieve more versatile pairings. While it does pick up source colouration and scales with more resolving ones, professionals or audiophiles with multiple sources wanting a consistent sound should find that here.

The RS10 requires more voltage than most IEMs to achieve the same listening volume. This means if you are a high-volume listener using a lower-power portable device or smartphone, a DAC/AMP or external amplifier may be required. Otherwise, the RS10 isn’t too demanding. I found that, beyond volume, bass remained extended and dynamic on less powerful sources such as my Xperia 5 II, I was just pushing the volume higher than usual. My desktop stack did provide a slight increase in sub-bass weight but nothing huge. More noticeable was the jump in detail and soundstage expansion. Given its resolving nature, I would recommend a resolving dedicated source to extract the best performance from this IEM. The RS10 isn’t too prone to hiss given that it isn’t especially sensitivity. On volume 0 with the amp circuit engaged, the RS10 was dead silent connected to the M2X, where more sensitive IEMs can pick up noise.

I believe this is one of the easiest high-end IEMs to drive, especially considering how resolving and revealing it is. Output impedance isn’t a concern, it doesn’t require amplification to achieve a dynamic sound nor is source noise a prime concern. The main concern here would be volume output but this shouldn’t be a concern for average listening volumes. Wide synergy can be achieved due to its tuning, though you will want a linear source like the Topping 30-Pro or 90 stacks to best appreciate its tuning chops. Technically, it also scales well. Added warmth isn’t a bad thing, however, and the RS10 has plenty of separation to pair with tube or warmer SS amps well. On the flipside, sharper sources like the THX789 aren’t a concern as the lower-treble isn’t emphasized. I would be most cautious of older Sabre sources afflicted by middle-treble glare, but even then, I didn’t find this pairing polarising. The ease of driveability is a huge asset for the RS10.