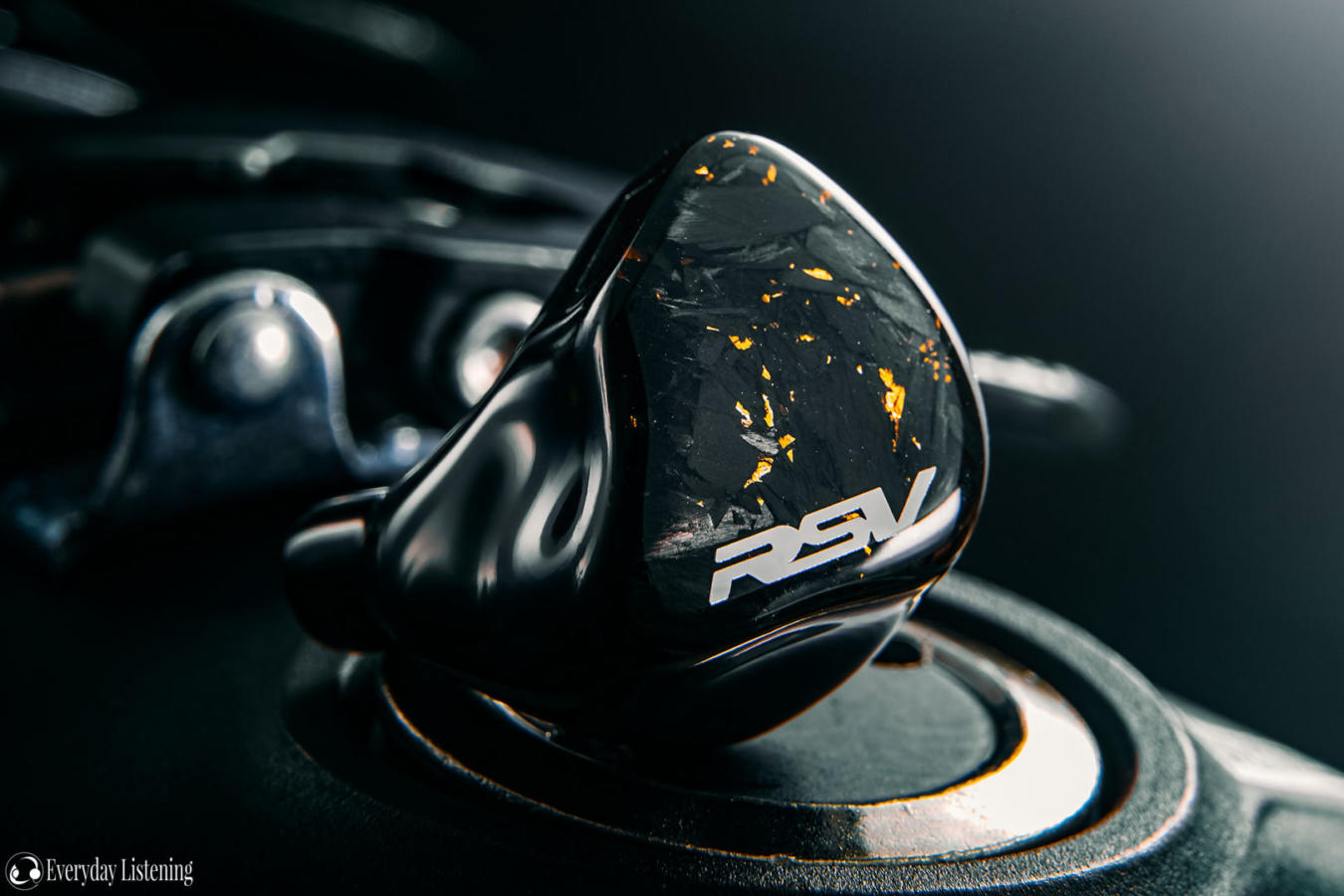 Testing Methodology: Measured using Arta via IEC 711 coupler to Startech external sound card. 7-9KHz peaks may be artefacts/emphasised due to my measurement setup, less so with deep fit. Measurements besides channel balance are volume matched at 1KHz. Fit depth normalised to my best abilities to reduce coupler resonance. Still, due to these factors, my measurements may not accurately reflect the earphone or measurements taken by others.

I detailed this in my first impressions and the same virtues have remained over further testing. The RSV offers a superbly even-handed rendition of music paired with a more muscular note presentation instigated by a sub-bass lift that heightens engagement. By placing the emphasis in the deepest registers, it is granted heft and weight afforded to few BA monitors and does so with minimal tonal colouration elsewhere too. It also avoids the fallibilities of the conventional Harman-target IEM with minimal shout in the upper-midrange due to a more aggressive 4k nadir. The RSV isn’t an especially warm or smooth earphone but never comes across as stark either. It exemplifies transparency bolstered by an uptick of bass slam and energy. This monitor is refined, accurate and highly genre adaptable, evoking all hallmark traits of a well-tuned earphone without losing its own character and ability to musically engage.

I certainly wasn’t expecting this from the RSV; the low-end is bold, deep-reaching and immense fun to listen to. Despite this, is retains a good balance with the rest of the sound and avoids tonal colouration. The high level of separation is key here, as emphasis lies chiefly in the sub-bass region. It doesn’t have the sensation of pressure and moving air as a high-end DD earphone may. But, the RSV would leave very few wanting when it comes to slam and rumble, both of which are among the best I’ve heard from any BA monitor. Tonal transparency is standout as one would expect from the company, achieved through a steady mid-bass and light cut through the upper bass that balances out the added sub-bass presence. This can be attributed partially to the note presentation which is fairly typical BA, being agile and controlled. The uptick of sub-bass does add some weight and the length of decay is slightly longer.

In turn, the RSV offers a combination of standout dynamics and greater texture than the majority of competitors. It is simultaneously a smooth and highly defined monitor with an accurate timbre, just a hint of sub-bass boxiness on certain tracks with lingering bass notes. If I had a chief complaint, it would be that the sub-bass isn’t the most defined, but again, most BA monitors don’t reach this deep. Instead, the RSV tends to prioritise tactility over pure resolving power. Separation also remains very high through the combination of control and absence of warmth or added mid-bass body. There are faster and more detailed monitors out there, also more linear ones. However, the RSV crafts, to my ears, one of the best balances between musical enjoyment and tonal transparency. The net result is a powerful and hugely tactile bass that is versatile and simply a pleasure to listen to.

The midrange has always been a strength for Moondrop and Soft Ears take it to the next level. The RSV measures most similarly to the very popular Blessing 2 but trades off a little body and warmth for greater smoothness through the upper-mids and highs. For my tastes, the RSV is right on the money, this is a tonally neutral and refined earphone with a highly accurate voicing and timbre. However, it also possesses minimal shout and intensity in so doing; as is a common complaint with these tunings. While instruments sit just behind vocals with its slightly recessed lower-midrange, both are presented with faithful size and tone. The earphone has an uptick of density and a slightly smoother articulation that retain good extension and openness yet mitigate almost all harshness and strain in the upper-midrange.

That said, the RSV is not a perfectly even sound even if it performs well in essentially all regards. I am hearing a slightly thinner note body, and relative to the Blessing 2, it does trade off some euphony for a slightly more defined and dynamic/revealing style of presentation. Accordingly, though the RSV doesn’t fatigue with brightness or forwardness, it still isn’t the ideal choice for easy listening and can slightly diminish vocal power and warmth. Nevertheless, this is a con at a stretch, as the RSV offers one of the most perfect and consistent vocal renditions I’ve personally heard. It showcases masterful control over tuning with a strong technical performance to match. The sub-bass emphasis doesn’t colour the midrange tonality, the midrange itself showcases excellent linearity and the treble too occupies its right place. Indeed, I find this a highly appealing tuning that will be sure to please many. While it could do with a smidge more body, it remains a highly refined and enjoyable listen.

I think this is a very curious approach to treble tuning and a tasteful one at that. However, if I were to pinpoint a weakness of this earphone, it is likely with regards to its treble extension. While not lacking and a hearty step up in all regards from both the Blessing 2 and the new Variations, the RSV is not a monitor for those wanting huge sparkle and headroom. It remains within the above average in-class, enhanced by exemplary tonal refinement. It represents a departure from your usual high-end monitor and the Blessing 2 here with zero lower-treble peakiness. It provides a very linear lower-treble, a small middle-treble dip and a small upper-treble peak. Though I still wouldn’t characterise the RSV as a contrast-heavy earphone due to the small magnitude of deviation. Accordingly, expect a natural foreground instrument portrayal with convincing texture and decay. The uptick of upper-treble energy is most evident here rather than imbuing huge energy and micro-detail retrieval above, granting instruments slightly more energy and shimmer.

This tuning decision also helps to extract a little more background detail and air in what it otherwise a mostly foreground focused detail delivery with an emphasis more on layering than diffuse expansion. It doesn’t possess the most crispness but remains one of the more resolving earphones in its class here due to its even-handed delivery that avoids overshadowing small details. The middle-treble dip is also welcome, it adds a little additional smoothness and cleanliness in addition to enhancing the perception of layers. The RSV stands out here with the ability to delineate multiple layers rather than crafting hyper contrasted foreground/background layers that as is evident on most competitors that can be enjoyed if not representing ideal verisimilitude. Altogether, the RSV offers a gorgeous balance between technical performance, cleanliness, and refinement.

In tune with its good but not exemplary treble extension, the RSV provides a modest treble expansion that reaches beyond the head if not in an overt manner. The highlight here is the combination between a slightly ovoid stage that isn’t excessively biased towards width and superb imaging, which is a standout in almost every regards. This is achieved through a combination of a focused detail presentation and even-handed delivery that maintains a faithful placement of elements relative to the original recording. Lead vocals hold a rock-solid centre image and directional cues are pinpoint sharp. Layers too are both highly defined and well-delineated. This is especially evident in the midrange, where the RSV is able to resolve each vocal layer distinctly.

Further aiding immersion is its ability to place both laterally and coronally, adding dimension to its image. Though you don’t get huge sparkle and speed, falling short of being holographic, the RSV remains layered and multi-dimensional. Its excellent separation only enhances this experience, highlighting small details and gives some insight into the space between each note that warmer earphones can fill in. I personally find the focused and less diffuse presentation here to aid coherence here as, in the absence of added warmth and body, it still manages to sound highly organised and cohesive. Meanwhile, earphones with a larger yet more diffuse stage can gain space at the cost of organisation.

With a very low 8-ohm impedance and a very high 125dB sensitivity, the RSV is a highly efficient earphone that doesn’t demand much from the source. However, unlike the RS10, Soft Ears didn’t specify that it has a flat impedance design meaning output impedance is something to consider for source pairings.

Switching between the Shanling M2X (1-ohm) and Hiby R6 (10-ohms) revealed a noticeable shift in tonality on the RSV. While bass extension remained strong, the tonality skewed much brighter towards an inverse L with treble dominating. That said, despite its low impedance, the RSV had a good tonal balance from the Astell & Kern Dual DAC cable (2-ohms) and my Xperia 5 II (estimated 2-3 ohms) with only a slightly diminished bass. The added sub-bass surely helps with regards to flexibility here, buffering sources with lower output power and higher impedances with a bit more power whilst not being excessive on powerful, low impedance sources.

The RSV is highly efficient, achieving a dynamic sound from even low-power portable sources such as my Xperia smartphone. My desktop stack did provide more sub-bass slam and a noticeably wider soundstage but good balance was easy to achieve elsewhere too. Users shouldn’t feel the need to purchase a hugely powerful source to extract performance here. The RSV also isn’t too sensitive to the extent that source noise is a huge issues, hiss was very, very faintly audible on the M2X at volume 0 and completely inaudible when music was playing, the same went for my Xperia 5 II.

Soft Ears mention that the RSV was designed to be easy to drive, at least in the context of the RS10 and I’d say they’ve achieved just that. It is highly efficient, requiring minimal power to achieve a balanced and dynamic listen whilst retaining a reasonable buffer for source noise, so long as the source isn’t overtly noisy of course. It tolerates a few ohms of output impedance well but ideally pairs with 1-ohm sources and below. The RSV does pick up source colouration quite clearly due to its neutral tonality but the nature of its tuning also means it pairs well with almost all types of colouration. For instance, the RSV has enough smoothness in the highs to avoid glare on bright sources and minimal mid-bass/midrange colouration to avoid congestion on warmer sources too. I would avoid sources that are too sharp in the lower-treble, but besides this, enjoy pairings based on your personal preferences and buy according to the criteria above.