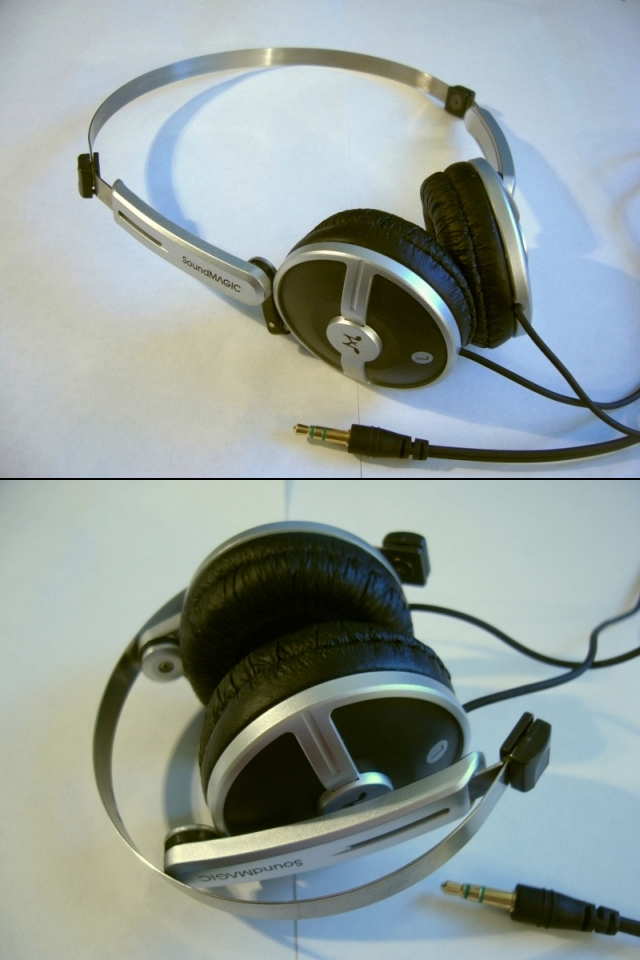 Brief: The P10s are the first on-ear model from renowned budget IEM manufacturer Soundmagic. I have great respect for Soundmagic’s ability to craft budget earphones, so I really wanted to give their first portable a chance – so badly in fact that I resisted the daily temptation to cancel my order for a staggering 45 days while waiting for mp4nation to ship them out.

Build Quality (5/10): The first time I removed these from the packaging it took me a good 20 minutes to figure out how to unfold them. Even with practice, they cannot be opened with one hand the way the PX100s can. Folded, they are amazingly small, surpassed only by the KSC75s. Unfolded they are about the same size as the others but noticeably lighter than even the ATH-ON3. The aluminum headband and plastic bits are thinner than those on the Sennheisers and JVCs and the hinges don’t glide gently into place like those on the PX100s. One area where these trump the competition, however, is the cord. It is very short (40cm, straight plug) and comes with an extension (1m, angled plug). It is quite thick but flexible, and rubberized to prevent tangling. Regrettably the P10s lack strain reliefs on cable entry.

These seem to use housings identical to the Sony MDR-710LP. I would not be surprised if Soundmagic is the OEM for those as well.

Comfort (7.5/10): Comfort is definitely a strong suite of these phones. The headband provides the optimum amount of clamping – they fit securely but do not hurt for quite a while. The cushions are nice and soft and the numerous hinges also provide adjustability in the fit. I would give these a higher score but the flexion of the headband makes putting them on a hassle as they tend to fold themselves back up. They’re also not very easy to wear around the neck, which is something I do quite often with portables. The fit is also less than ideal for those with a smaller hat size as the earcups will end up being the only point of contact.

Isolation (5/10): The P10s are semi-closed headphones. They provide minimal isolation – slightly less than the JVC flats. On the upside, they leak less than the flats and about the same as the closed-back Audio-Technica ON3s.

Sound: (4.75/10): I quite like the sound signature of the P10. They are very laid back and smooth-sounding headphones. I would say that they are the astral opposites of the KSC75s. The soundstage is incredible for something semi-closed and costing under $30. Everything is well-placed, if somewhat recessed. The highs are subdued and natural. The mids are full but not overly forward. The bass is medium-low in quantity, but fairly punchy and very well-controlled. They are definitely closer to the PX100s in sound signature, but I can almost say that they are less fatiguing because of the wider soundstage and subdued presentation.

Value (6.5/10): I think that Soundmagic once again has a strong competitor for the big-name companies with the P10 portables. They’re reasonably priced and cleverly designed. Though they are neither as visceral as the KSC75s nor as smooth as the PX100s, the colored, wide, and punchy sound of the P10s is lots of fun. The comfort deserves a second (or third) mention – the only reason they lose points there is that opening and getting them on can be a hassle.