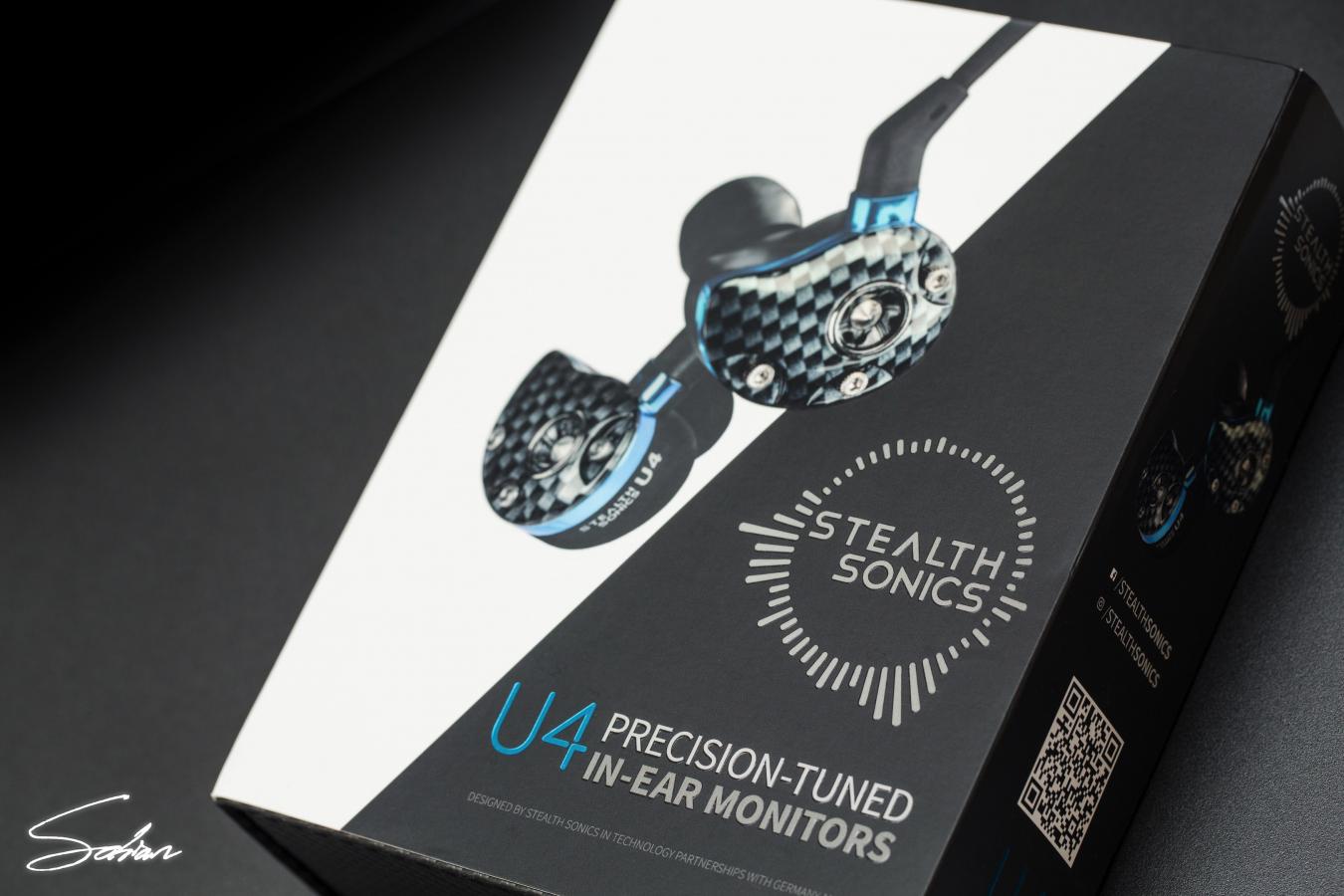 DISCLAIMER: Stealth Sonics loaned me the U4 in return for my honest opinion. I will send the unit back following the review. I am not personally affiliated with the company in any way, nor do I receive any monetary rewards for a positive evaluation. I’d like to Stealth Sonics for their kindness and support. The review is as follows.

Stealth Sonics is a Singaporean in-ear manufacturer that’s been gaining more and more attention the past couple years. Although they probably aren’t the first names you’d think of when you think Singapore, they have been garnering tons of positive responses through artist endorsements, region-wide loaner programs and appearances at CanJam, where I first encountered their brand. Today, I’ll be reviewing their 4-driver universal U4, as well as taking you behind Stealth Sonics’ myriad of in-house technologies that’ve made their monitors as pleasing, musical and technically-proficient as they are.

Stealth Sonics’ packaging is impressively mature; resembling something a seasoned veteran of the trade would put out. The outer sleeve is covered all-round with hi-res images. I’m particularly impressed by the glossy accents they’ve dotted throughout the matte artwork, which wonderfully accents text, as well as sections of photos like the faceplates. It really adds three-dimensionality and dynamism, which tend to be underrated in packaging and presentation. Underneath the sleeve is the main box, which is lined with a gorgeous, silken carbon fibre and the Stealth Sonics logo embossed on top.

Unfolding the box via a magnetic latch, you’re greeted by the in-ear monitors and a carrying case – neatly organised and recessed within foam cut-outs – as well as a Thank You card in a pocket to the side. Next to the in-ears, you have an extra pair of blue, chrome-finished faceplates that you can swap the default ones out for to achieve a different aesthetic. The included zipper case is lined with faux leather; robust, but very light. This makes it more ideal for on-the-go use than the heavier, metallic-infused cases I’ve experienced in the past. And, its size allows it to house at least two pairs of IEMs too.

Inside the case are the included accessories. In total, you get 7 pairs of tips, which include silicone tips, foam tips and bi-flange tips. You also get airline and 1/4″ adapters. In addition to that is an extra cable with an in-line microphone for use with mobile devices. And finally, you also get a microfibre cloth and a smaller soft pouch for light storage of the in-ears. Now this is what I call an accessories package! I absolutely admire Stealth Sonics for going all out here, while others’d typically consider it an afterthought. The competition should take notes, because they’ve knocked it out of the park.

The in-ears themselves are very robustly built. Between the almost-rubber-like shell, the blue inlay and the faceplate, the layers are seamlessly flush with zero wiggle, sharp edges or adhesive traces. Stealth Kompozit makes the shells softer to the touch, which’ll make it more resistant from bumps or scratches. It also congeals to the ear quicker than acrylic does. The U4’s striking, sci-fi aesthetic may not be for everyone. Personally, I think it’s unique in a very good way. Again, if you wish to, you can always swap out the carbon-fibre faceplates for the chrome-finished blue ones with the included tool.

The earpieces sit comfortably and securely in my ears. The smooth, rounded shape allows the U4 to distribute pressure very equally throughout the ear. But, it’s worth keeping in mind that these are rather shallow-fitting in-ears. If you tend to find it difficult to achieve a seal with shallower in-ears, you may have to resort to using the bi-flange tips. But, all in all, Stealth Sonics have excelled when it comes to presentation, accessories and build. Even at this price tier, they’ve packed in a plethora of goodies with stunning attention-to-detail, and I’d love to see nothing more than for others to follow suit.

On their website and marketing, Stealth Sonics feature a staggering amount of proprietary technologies, which include innovations toward acoustic design and shell durability. Stealth Sonics generously gave me the opportunity to speak to their head engineer about what all this tech was, and how they contributed towards the U4’s. Here’s what he had to say:

Isolation is basically the key thing in sound, especially in lower frequencies. So, if you don’t have isolation, you lose that. You don’t get to enjoy all the lower-end of the spectrum.

So, what we did was, we took an average of people’s ear impressions. This was possible thanks to our sister company, My Ears, who’ve been taking impressions for a very long time. We used those statistics and data to find one standard deviation – which is roughly 67% of the population – and have our product’s size and shape adhere to that.

We especially focused on the outer pinna; the part where the IEM actually goes into the ear and sits on the lobe. We wanted it sealed as much as possible. The data (demographic) that we had were mostly Western with a little bit of Asia as well. So, we designed the shell according to that. The whole idea behind it is if we were able to seal the pinna as much as possible, we would be able to achieve incremental isolation of 10dB, and that’s a lot.

But, if you pump that energy through your average, circular tubes, you don’t get to hear the higher harmonics. Why? It’s because of principles called resonance and cancellation. For example, whenever a sound engineer goes to a concert hall, they try to make sure no surface reflects equally. Because, if they do, one of two things will happen: Resonance or cancellation. You’ll lose out on some of that sound energy.

So, that’s precisely the idea behind SonicFlo. We use asymmetrical sound tubes to pump the air or sound through. Because there’s a lack of reflection now, the higher harmonics – the hi-hats, triangles – don’t get muddied out and disappear, so you do get that feeling of, “Wow, I’m hearing everything.” This will not affect the low frequencies, because the amplitude isn’t big enough. So, the lows won’t be affected by these asymmetrical tubes.

The Klarity Valve promises to ease discomfort. How? In our ear, pressure is balanced via our outer ear and the Eustachian tube. Every once in a while, your body will equalise that pressure. Now, when you have an IEM or an earbud in your ear, the drivers are pumping air into your ear, which builds up pressure over time. What the Klarity Valve does is it allows that pressure to escape through the IEM. If there’s ever too much pressure in the ear and it pushes back against the nozzle, the Klarity Valve will release it. So, it eases discomfort and reduces ear fatigue.

Now, let’s talk about why you need a large nozzle. Air, like water, is a fluid. Imagine a gardening hose. If you reduce the cross-sectional area of the gardening hose and you maintain the same amount of pressure pushing the water out, the velocity of the water shooting out of the hose will increase. Suddenly, the water has more power and impact, and it carries enough energy to even be considered damaging. So, even though the material conveyed is the same, the speed of the fluid is different. This is Bernoulli’s theorem.

The same applies to IEMs. If I were to listen to something via a smaller nozzle and a bigger nozzle, the information will still be the same; you’ll still hear the sound. However, the smaller nozzle will deliver it at a higher velocity for the same given amount of drivers and air being displaced. So, it impacts your eardrum at a much higher velocity than the larger nozzle. Because we don’t want the sound to impact the eardrum in a damaging way, we’ve made the nozzle of the U2, the U4 and the U9 quite pronounced compared to the other brands. It’s almost three times the size.

Stealth Damping allows us to give you crispier bass. How does that happen? On the faceplate of the universal, you’ll see something that looks like a turbine with a brass tip. Now, really, it’s only the weight of that thing that’s important; the turbine is just for design.

What it does is this: Think of a bass signal on an oscilloscope; let’s say the drummer hits the bass drum. What you’ll see is a spike, then you’ll have a trail; a decay trail. Now, assume that decay doesn’t decay as quickly as you want. What happens is that trail will build, and it’ll accumulate into what we call boominess. Because of that, you begin to lose all the other frequencies; the boominess masks them and takes over.

So, by adding a weight – that we’ve specifically measured (with a bit of tolerance) – to the IEM, the weight is allowed to absorb only the low-frequency sounds. It’s mechanical in nature. This allows the bass response to decay very quickly. When that happens, you hear a more crisp, clear bass, which also allows you to push it even further without diluting the other frequencies at the same time.

If you look at our shell and feel the material that makes contact with the ear, you’ll find a rather strange material that isn’t used in the market really. It’s soft, yet resilient; solid. This is a nanocoat that we’ve employed from the audiology industry. The audiology industry had developed this for older people, because they have to wear their hearing aids for a very long time; 8 to 10 hours. So, comfort was very important, and we brought this over to our IEMs.