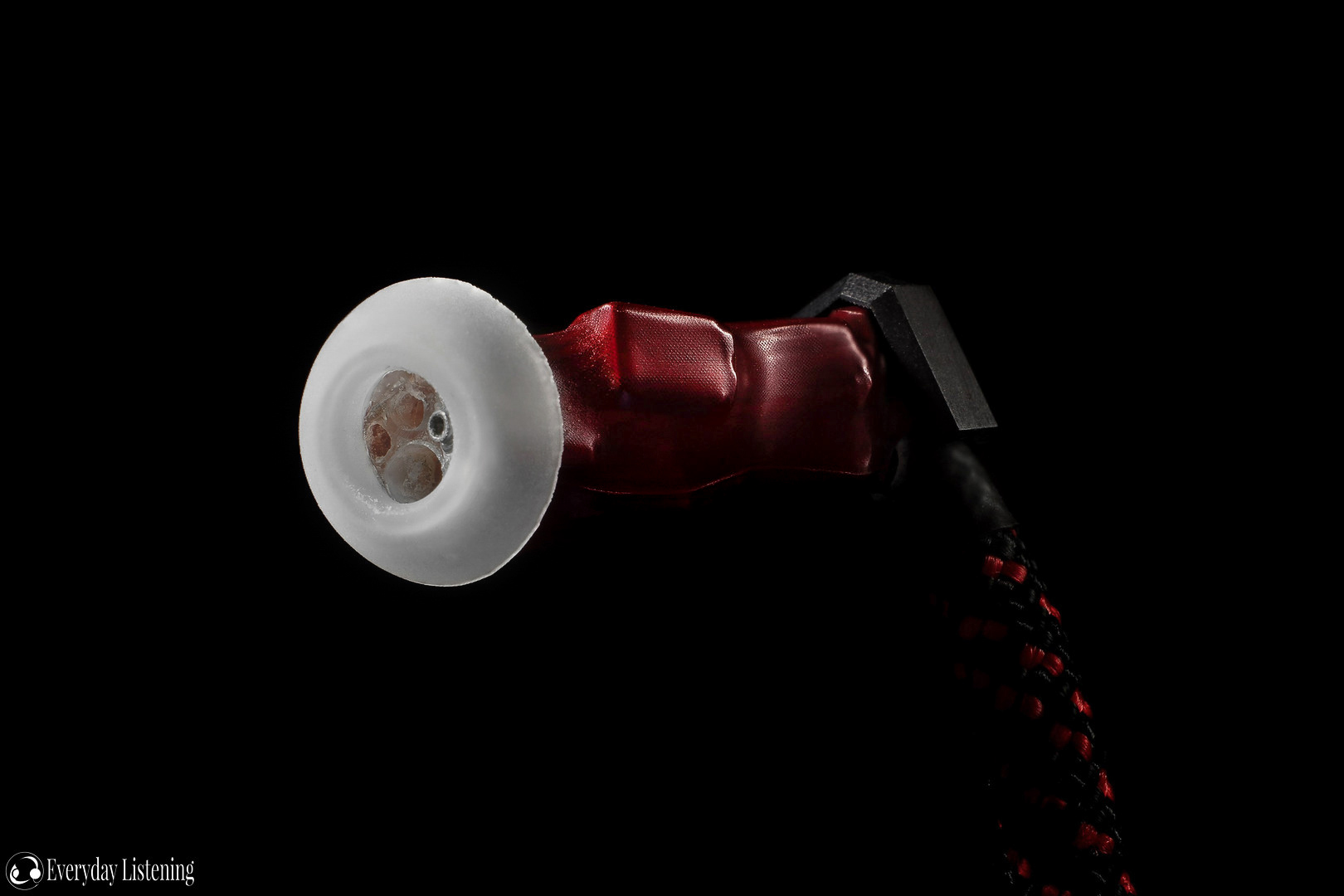 Most observe the absence of bass and immediately suggest the sound is neutral or reference. However, this is not the case here as I would consider the SB-7 to be slightly leaner and brighter than neutral. In return, it delivers the most revealing presentation I’ve come across yet. On the contrary, those wanting full-bodied mids and a rich bass response will not find it here, but those valuing top level micro-detail retrieval and clarity will find the SB-7 very much to their liking.

This was one of the most surprising aspects of the SB-7 on first listen, in a good way. Though not enhanced in any regard, bass is super-fast, tight and surprisingly hard-hitting due to excellent extension and a cool tone that heightens separation and definition. Sub-bass is very slightly less present than mid and upper-bass though all sit slightly behind within the mix, the source of the earphone’s tone and generally leaner presentation.

Each note is presented with surgical control that compliments its immense speed, both contributing towards excellent bass detail retrieval. Meanwhile, a smoother texture contributes towards a presentation that remains pleasantly natural, musical and easy on the ears. The SB-7 simply breezes through complex tracks that sound busy on lesser gear. A combination of excellent technical traits and strong extension all produce a surprisingly dynamic listen despite bass being more reserved in its quantity.

From first listen, it’s clear the SB-7 caters towards those wanting a sound that is absolutely revealing. A neutral lower and centre-midrange maintain a pleasing sense of midrange body while a climb to fair emphasis within the upper-midrange and treble greatly aids clarity. The SB-7, therefore, prioritises micro-detail retrieval over a natural timbre, however, as the lower-midrange is fairly present, it avoids sounding nasal, metallic or raspy. Still, male vocals can sound slightly thinned out, especially on contemporary tracks that tend to be mastered with thinner vocals.

However, on older tracks, timbre is considerably improved and female vocals tend to be less affected by this tuning besides being brought forward in the mix. Vocal clarity is top-notch and background/foreground separation is among the best I’ve come across. The SB-7 caters towards the vocal lovers out there, especially fans of older pop, jazz and classical, flattering well-mastered albums with utmost transparency, almost unrivalled clarity and immense resolving power.

Treble is most present within the SB-7’s presentation but is tuned to reduce fatigue and over-brightness. Chiefly, lower-treble is quite neutral, with the high-end deriving crispness and attack more from the upper-midrange. Meanwhile, reasonable middle treble emphasis greatly aids air and grants a pristine sense of clarity to treble instrumentation; the earphones have a lot of atmosphere and sound incredibly open as a result. Accordingly, the background is quite bright, however, despite this, the SB-7 nonetheless sounds clean and organised.

I can only attribute this trait to its excellent control throughout; notes are present, but they aren’t sharp or over-articulated due to relative attenuation of the lower-treble. Moreover, decay is on the faster side leaving ample space between each note that makes fine detail easier to discern for the listener. Detail retrieval is terrific and extension is, in every regard, TOTL, a product of custom tubeless super-tweeters, delivering sublime resolution. In addition to a tuning that accentuates micro-detail presence, the SB-7 delivers a wonderfully nuanced listen.

The way the SB-7 organises its stage is the factor that really brings its whole sound together; one would not expect a brighter, leaner earphone such as this to sound so coherent. Actually, the SB-7 likely won’t shock too many in terms of space where it expands just beyond the head in all axis. What it excels with is imaging, which is simply superb. Mids are well-layered and instrument placement is spot on. Directional cues are easy to pinpoint and separation is excellent.

I was especially impressed when listening to some Van Morrison and Steve Miller Band albums where the earphones did an exceptional job discerning between multiple guitar lines in addition to the portraying the subtle reverb applied to vocals that isn’t usually so apparent. The SB-7 simply impresses with its ability to deconstruct busy tracks, enabling the listener to pick out small details and accompanying instrumentals with ease.

The SB-7 has a modest 15-ohm impedance combined with an unspecified sensitivity. In listening, it has medium efficiency which is a plus when it comes to hiss sensitivity, though it does require more power than most high-end IEMs to reach the same volume. Its low-impedance and higher driver count also make it best suited towards sources with a low output impedance, preferably below 2. Being a highly-resolving IEM, it does benefit from a dedicated source and colouration is especially apparent.

Hiby R6: The Hiby’s 10ohm output impedance has a fairly significant impact on the SB-7, producing a noticeably darker signature. However, some may prefer this as the SB-7 is already bright. Still, it sounds rather muted and attack is soft. Sub-bass extension suffers as does clarity and vocal presence. Detail retrieval is similar and the soundstage is very wide. However, imaging takes a hit as the signature is skewed dark.

Fiio X7 MKII w/AM3A: The X7 MKII provides a slightly less impactful sub-bass in return for a hint of additional mid-bass warmth. It has a smoother bass texture combined with a slightly denser, smoother midrange at the cost of upper-midrange extension. Highs are well-detailed with a slightly crisper detail region and good resolution. Soundstage expansion is good and separation remains strong.

iBasso DX200 w/AMP5: This pairing is very strong, deliving a very dynamic low-end with controlled and powerful sub-bass. Mids are well-extended and very clear while maintaining pleasing body. This pairing has a neutral midrange tone and is very transparent. Highs are slightly more aggressive but very well-detailed with great extension and resolution. Soundstage expansion is strong and separation is great alongside very organised imaging.

Hyla CE-5 ($940): The CE-5 is more V-shaped than the SB-7 and smoother in its note delivery. It has greater sub-bass extension combined with greater bass emphasis throughout, especially sub-bass. It has a slower low-end with a smoother texture but also greater dynamics. The CE-5 has a smoother midrange, it has less lower-midrange but more bass to fill body in. As it’s less linear, midrange detail retrieval isn’t as high and it is more track dependent.

It has less vocal presence and clarity but is quite clear in isolation. The CE-5 has similar treble detail but this comes at the cost of body with treble being thinner. Meanwhile, its middle-treble is less present so its background is darker. It has almost the same level of extension, producing high-resolution, but it doesn’t sound as open and airy. The CE-5 has a larger soundstage but doesn’t separate nearly as well and its imaging is not as coherent.

Empire Ears Phantom ($1800): The Phantom is the opposite style of tuning, more of an L. It is a lot warmer with considerably enhanced bass. Sub-bass extension is slightly better on the Phantom and it has a lot more emphasis throughout its entire bass, especially sub and upper-bass. Its midrange is fuller, as a result, however, it also has quite a lot of vocal presence and clarity due to its upper-midrange emphasis. The SB-7 sounds clearer and more transparent while the Phantom is more natural and rich.

The SB-7 has greater speed and separation while the Phantom is even more coherent. The Phantom has a slightly crisper lower-treble, it isn’t as detailed or controlled but extends just as far up top so resolution remains very high. Middle-treble is inverse, the Phantom being very dark and clean and the SB-7 being bright, airy and open. The Phantom has a much wider soundstage but lacks the same depth and separation due to its fuller tuning. The SB-7 images better as is is more linear in general.

Noble Audio Katana ($1850): The Katana is slightly more balanced overall, but is similarly tuned tone-wise. It has similar sub-bass extension but has more emphasis and slam. It has slightly more mid-bass, sounding fuller and more neutral in tone, but it isn’t as fast or detailed down-low. The Katana also has fuller midrange with less upper-midrange bias. It’s just as transparent, slightly slower again, but also more natural. The SB-7 has more clarity and separation here and its layering is top-level.

The Katana has lower-treble emphasis in addition to middle-treble emphasis so it sounds slightly crisper than the SB-7. That said, the SB-7 is a touch more detailed and appreciably more controlled within its treble. It sounds cleaner and more composed when the track gets busy. Despite being generally thinner below, The SB-7’s treble timbre is slightly more accurate and it has greater micro-detail. The Katana has a larger soundstage, however, it lacks the same imaging and separation of the SB-7.

Stereopravda doesn’t present the same flawless construction that we’ve seen from some manufacturers like Campfire Audio and the SB-7’s ergonomics lend it more towards stationary home listening. However, every aspect of the SB-7 serves its sound quality and, in this regard, it definitely makes a statement. At such a price point, listeners are searching for a sublime audio experience, and that’s what the SB-7 provides. I have yet to hear a more revealing earphones and, though not explicitly balanced, resolution and micro-detail are all top-notch with a tuning that further enhances their presence. The strong technical traits of this earphones enable it to retain perfect composure under pressure and its imaging is thoroughly enthralling. Though subject to individual ear anatomy, I only wish that the SB-7 were more comfortable so I could listen all day long.

The SB-7 can be purchased from StereoPravda for $2500 USD. I am not affiliated with StereoPravda and receive no earnings from purchases through this link.