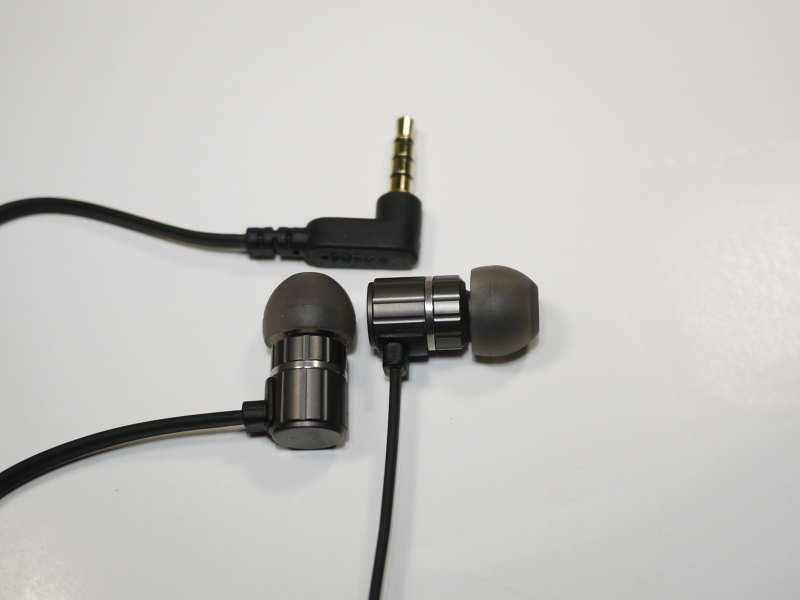 Accessories (2.5/5) – Single-flange silicone tips (3 sizes), foam tips (1 pair), shirt clip, and velvet drawstring carrying pouch
Build Quality (4/5) – True to its name, the Tank feels quite sturdy, with metal housings, narrow flat cables, and a well-relieved L-plug. It also boasts an inline mic with a 1-button remote, but no cable cinch
Isolation (3/5) – On par with other earphones of this type
Microphonics (3/5) – Bothersome with cable-down wear; good when worn over-the-ear
Comfort (4/5) – The 8mm driver of the Tank permits a slim and compact design. The earphones can be worn comfortably both cable-down and cable up, though the flat cable can be a bit resistant to over-the-ear wear and the lack of a cable cinch doesn’t help

Sound (7.7/10) – The T-Peos Tank is a dynamic-driver earphone with an enhanced-bass sound signature and warm tonal character. It has significantly more bass than the VSonic VSD1, for example, but a bit less than the Sony MH1C, especially in the sub-bass region. Bass quality is good – it is tighter compared to both the less bassy Soundmagic E10 and the more impactful Dunu Landmine.

Its mids manage to avoid veiling quite well, and don’t sound as recessed as those of the Sony MH1C. Clarity is very good, beating out the similarly-priced VSonic GR02 Bass Edition and Soundmagic E10, as well as the pricier but more veiled-sounding Dunu Landmine.

There is a bit of elevation in the treble region, which is shared by the other dynamic-driver T-Peos earphones I’ve tried recently. At times it results in mild harshness and can accentuate sibilance some, but overall the Tank is pretty composed. Tonally, it is darker and warmer than, for example, the Soundmagic E10.

The presentation is good, not great, with only average depth and a bit of congestion. It is less spacious than the Soundmagic E10, for example, and even the Dunu Landmine. The enhanced bass also hurts the imaging a touch compared to T-Peos’ similarly-priced but less bassy Popular model.

These sibling earphones from T-Peos are cut from the same cloth but have distinctive sound signatures. The Tank is warmer and bassier, while the Popular is brighter and sounds more v-shaped. The greater bass quantity of the Tank makes it a little boomy in comparison while the more neutral Popular model is clearer. The treble of the Tank is a little smoother while the Popular is more harsh and splashy, but also more crisp. The soundstage presentations of the two earphones are extremely similar. Lastly, the Tank also has a bit of driver flex while the Popular seems immune to the phenomenon.

The GR02 Bass Edition is a v-shaped, enhanced-bass earphone. Overall bass impact is pretty similar between the GR02 and Tank but the latter boasts a slightly tighter low end. Its mids are also less recessed compared to the VSonics and sound warmer and more natural overall. At the top, the Tank is a little smoother while the more v-shaped GR02 has a greater tendency towards sibilance. The GR02 has a wider soundstage, however, and sounds a little more airy.

VSonic’s newer budget set, the VSD1S, is a more balanced earphone compared to the GR02 Bass Edition but still maintains a somewhat v-shaped sound signature. Compared to the Tank, its bass is less enhanced and the tone is not as warm. The VSD1S sounds clearer and has a brighter, more energetic top end that makes the Tank seem somewhat dark in comparison. The Tank also appears a bit congested next to the wide and airy soundstage of the VSD1S.

Sony’s MH1C is a warm and smooth-sounding earphone that’s tonally similar to the Tank. It has a bit more subbass presence and less mid-bass bloat than the Tank, but both earphones have plenty of bass. The MH1C sounds more recessed in the midrange but is smoother in the treble region, while the Tank is a little more peaky and energetic at the top. The presentation of the MH1C also has an upper hand.

Value (8.5/10) – There aren’t many sub-$50 sets that perform on the level of the new T-Peos Tank, and fewer still also offer headset functionality and a sturdy construction. The signature of the Tank is a bassy one, but it manages to maintain control over its bass and good clarity elsewhere, especially in the midrange. As it is a new release, international pricing hasn’t stabilized quite yet, but anything at or below ~$40 makes the Tank a solid buy.