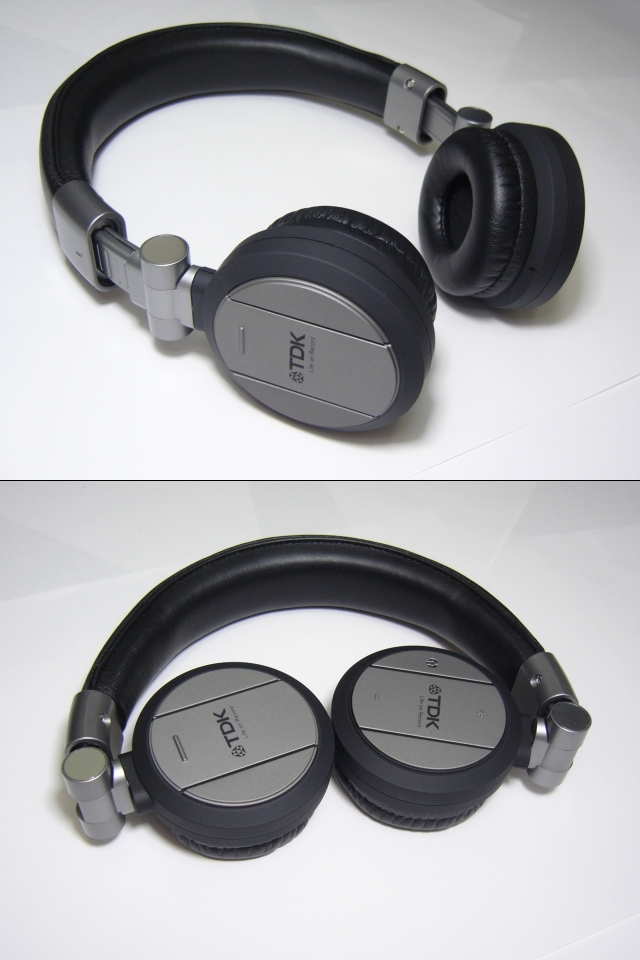 Build Quality (7/10): The construction is mostly plastic but feels quite solid. Due to the two AAA batteries and wireless receiver/control circuitry, the housings of the WR700 are slightly heavier than those of the average portable headphone of similar size but the lack of cabling makes up for the extra weight. The rubberized cups are also thicker than those of wired headphones, but not so much thicker that they draw attention. In fact, the grey-and-black aesthetic of the WR700 is extremely unassuming and rarely attracts a second glance. The headband is padded in very soft black pleather and exerts little pressure on the wearer’s head. The earcups rotate and fold inwards for storage and the shallow supraaural pads seal well with the ear – so well in fact that mild driver flex can be coaxed from the headphones. I’ve had the headphones for a while now and the folding mechanism does creak a bit but it’s nothing one wouldn’t expect from a pair of plastic hinges. Best of all, cable issues are in impossibility with the WR700.

Comfort (8/10): The WR700 is supraaural and weighs a bit more than the average wired set due to the battery compartment and wireless circuitry. The soft pads, low clamping force, and rotating earcups all make the headphone quite comfortable for prolonged use at the cost of a somewhat less-than-secure fit – the WR700 really doesn’t clamp hard enough to cope with any physical activity besides walking. The freedom from cabling, however, adds a whole new dimension to the term ‘convenience’.

Isolation (6.5/10): The soft pads provide a moderate amount of isolation – enough to make music enjoyable on the go but definitely not adequate for the subway or an airplane. The level of isolation is not at all different from what is provided by similar-size wired sets such as the Sennheiser PX200-II and Denon AH-P372.

Sound (6/10): The TDK WR700 is based around Kleer wireless technology – a specialized RF protocol also utilized by companies such as Sleek Audio, Sennheiser, and AKG. Kleer was designed as a way to harness the low-power and low-interference capabilities of the Bluetooth standard without the need for compression of CD-quality audio. Bluetooth subdivides the 2.4 Ghz wireless band into smaller segments and always seeks out the segment of minimum interference but doesn’t quite have enough bandwidth for uncompressed audio. Kleer uses larger a segmentation method but operates on the same basic principle. The bandwidth offered by Kleer, however, can handle any audio bitrate. There are additional advantages to Kleer, such as a simplified handshaking protocol and point-to-multipoint connectivity, which allows a single transmitter to be shared between several receivers.

On paper Kleer is the ideal protocol for wireless audio devices but of course the magic is in the implementation. The TDK WR700 takes four AAA batteries (two in the unit itself and two in the transmitter) and can run for upwards of 30 hours on a single set. Operation is extremely simple. There’s no channel selection or pairing trickery – just power buttons on both the headphones and transmitter and a set of volume controls on one of the earcups. What surprised me most after years of owning an old 900Mhz Sennheiser wireless set is the complete lack of interference – cordless phones, microwaves, and wireless networks have absolutely no effect on the Kleer signal. Moving toward the limit of the WR700’s 30ft range is absolutely drama-free. The Kleer system merely continues switching channels until it can no longer reach the headphones and the music cuts out. There is no static and no clicks or pops. When the headphones come back in range, audio cuts back in. If more than five minutes are spent out of range of the transmitter, the headphones will shut off to preserve battery life.

Kleer is all well and good, then, but how does the WR700 fare as a headphone? To be honest, the price/performance ratio is not brilliant, or at least would not be brilliant if the WR700 were a wired set. The first thing noticeable when the WR700 is powered on is the slight background hiss present at all times. The hiss is due to internal amp of the headphones and is an unavoidable reality of most wireless sets. With the WR700 the hiss is barely perceptible at moderate volumes between tracks and mostly inaudible once music starts playing. The overall sonic performance is competent but not outstanding. The bass is tight and relatively accurate but not nearly deep enough to satisfy bassheads. Instead, the low end of the headphone is relatively flat and in good balance with the midrange. The clarity is impressive and the headphones are quite fast and resolving, keeping up well with busy tracks. Fine detail is relayed well enough to differentiate between lossy and lossless audio files, but only just. Both the low end and midrange do suffer from a lack of real weight and texture, making the headphones sound slightly flat and lifeless.

The treble, on the other hand, is quite smooth and has the right amount of sparkle without sounding aggressive or sibilant. Top-end extension is decent but I can hear the WR700 begin drop off well before reaching the limits of my hearing. Stereo separation is excellent and the headphones do create a believable, albeit not massive, soundstage. Individual instruments are easy to pick out but can be tough to place spatially. The headphone can actually portray distance as well as intimacy adeptly but does so very rarely, instead keeping most of the audio in a band that sounds to be several feet from the listener. A ‘closed’ feel results from a lack of air and mediocre imaging – those looking for an airy and spacious sound may want to look elsewhere.

Overall, the TDK WR700 never really sounds like a $200 headphone. It is technically competent and generally quite enjoyable but lacks the ‘wow’ factor that is present in all of the truly great >$100 sets. It offers nothing unique, nothing special – it has no sound signature per se. Movie lovers probably won’t mind but music listeners may find the sound of the WR700 quite bland.

Value (7.5/10): As the only wireless headphone in this review and the only such set I’ve ever actually liked, the WR700 has quite a lot going for it by default. It doesn’t hurt that the engineers clearly thought the design through quite well – the accessory pack, for example, includes a short extension cord for hooking the transmitter up to small portable players or hard-to-reach headphone jacks, a stretchy silicone band for piggybacking the transmitter on a portable player, a soft carrying pouch, and a ¼” adapter. The headphones themselves are compact and portable, making them useful on the move, and do not require a charging cradle or adapter of any sort, which makes them an excellent travel companion (though it should be noted that some airlines do not permit wireless electronics to be used on board). They are also reasonably light and quite comfortable, making them a joy to use at home with the TV or computer. Interference from other cordless devices is a non-issue and functionality is perfect right up to the range limits. The sound quality of the WR700 on the whole is slightly underwhelming but not downright disappointing – the headphones certainly don’t keep up with most of the wired sets in their price category, sounding a bit dull and plasticky, but still offer an improvement over entry-level sets. Bassheads and die-hard audiophiles need not apply but for the casual listener the lack of cables might just be worth all of the sacrifices. As a die-hard headphone user, I will be the first to concede that the lack of cables is an extremely underrated experience.