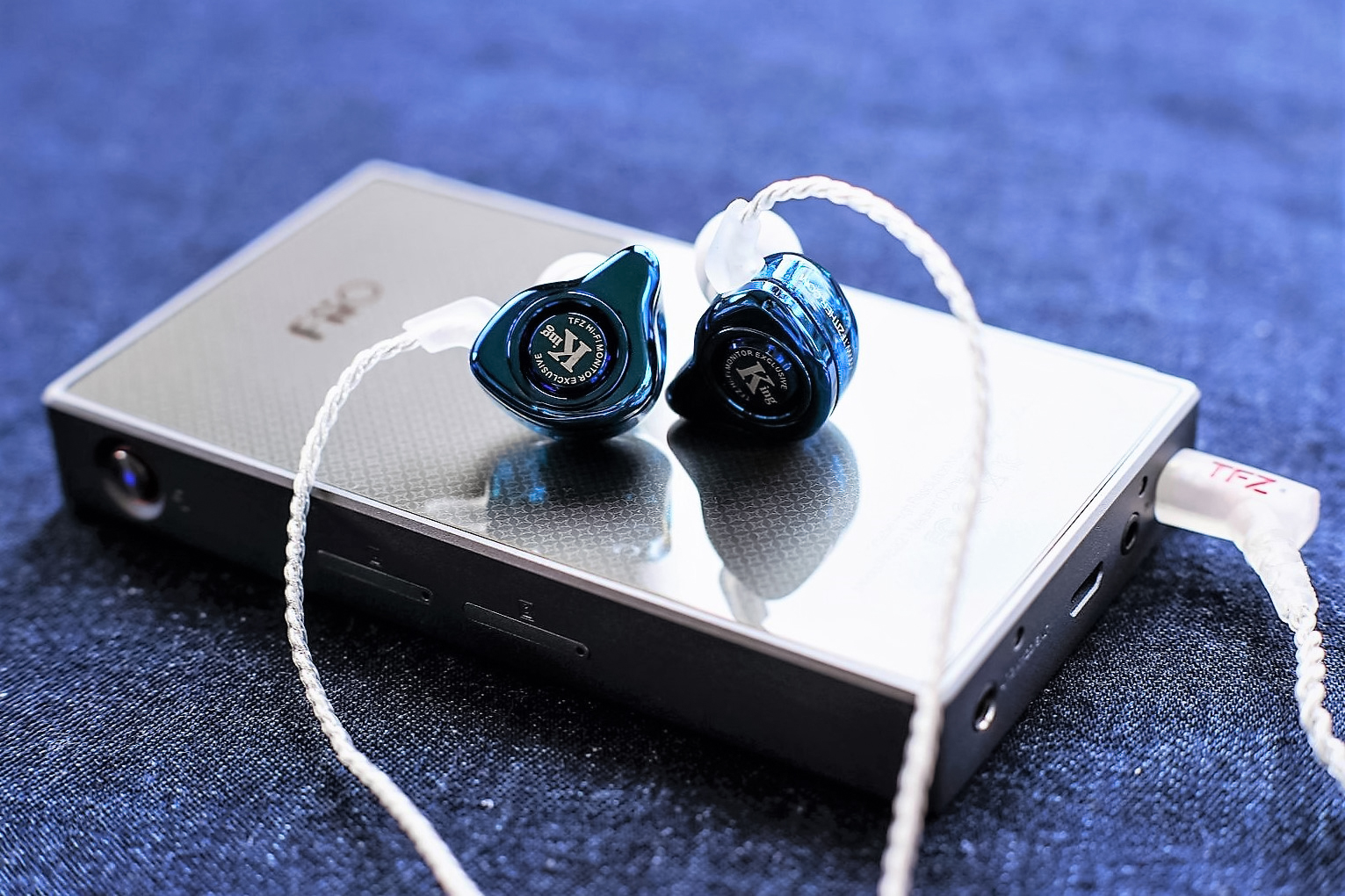 The King’s have an unorthodox negative profile fit that reminds me of universal adapted custom earphones. They well earn their asking price with an incredible density and solidity in the hand and a striking metallic blue colour scheme that is catching without being gaudy.

The housings are primarily plastic though the outer faceplates are metal. They actually feel like stainless steel rather than aluminium and the earphones incredible weight contribute to that impression. The plastic portions are thick and feel denser than most acrylic earphones including much more expensive models from Westone and Shure. The plastic and metal components are both perfectly finished and are mated very well, creating a sleek design. The outer faces possess an almost pearlescent quality, changing colour as they reflect light from different angles. All of these little features contribute to an earphone that is both tactile and visually captivating.

During wear, the earphones continue to impress with superb isolation, seal and comfort. Though they have very large housings, as large as the EN700 Bass but considerably wider, they achieve comfort through their very ergonomic forming. Those with smaller ears may experience comfort issues though I found the King’s to conform almost perfectly into the grooves of my ears, achieving faultless long-term comfort. That being said, I didn’t forget I was wearing them due to the weight of the housings and they do protrude quite a bit from the ear; you can’t sleep wearing them though wind noise when out and about is reasonable due to their smoother styling. The smaller Oriveti Basics do provide similar comfort and their vastly lighter, smaller housings make them the better choice for runners or those who like to sleep wearing earphones.

The Kings have reasonably short nozzles though when equipped with the Dual flange ear tips, achieve a depth of fit similar to the longer nozzled Shure SE215’s. Of the Simgot EN700 Bass, Oriveti Basic and Magaosi K3 Pro, the King easily isolates and seals the best, they are almost at the level of the Shures, just with a shallower fit. Their fully-sealed housings produce vacuum like isolation when combined with foam ear tips, perfect for any kind of travel, though they do produce notable driver flex upon insertion. I did experience some stability issues due to those metal faceplates which place the earphone’s weight very laterally and, when combined with their shallower fit (with single flange tips) and lack of ear guides, the earphones to have a tendency to wiggle themselves loose with activity. That being said, I would consider the earphones to have a really solid fit overall and they were rock solid in general commute.

Like the EN700 Bass, the King’s also lack a removable cable though TFZ has since released a variant with a removable cable (and at the same price!). The 4-core unit on the King also isn’t as nice as the 8-core unit on the Simgot earphones though both are far more manageable than the tacky unit equipped on the K3 Pro. The King’s cable is smooth and doesn’t catch on clothes, it also doesn’t pick up too much microphonic noise when walking. Unfortunately, the cable has quite a lot of memory though they are compliant enough to coil and store.

The cable also terminates in a 45-degreeplug which works well from both an amp and from a portable source within the pocket. Of note, there is no offset on the plug so if you have a particularly tight phone case, the plug may not fit. The cable routes over the ear though they have no ear-guides at all. This wasn’t too much of an issue in my testing, I actually prefer this type of fit in many circumstances, though the springy nature of the cable did make it prone to flicking over the tops of my ears. The angled connectors do somewhat help to route the cable comfortably over the ear despite the absence of guides and twisting the cable helps to keep them in line.