Fidue Sirius ($899)
The Sirius has a somewhat similar mid-centric signature, with a slightly different presentation. The Sirius’ stage is wider and taller, with similar depth and airiness. Due to the proportions, the 8.2’s stage has more of a wide feel to it. They share a similar stage positioning that is slightly closer than neutral. The 8.2 has an excellent bass that approaches the natural texture and decay of a dynamic driver, with the Sirius actually having a dynamic driver. The result is a more natural decay, while the 8.2’s bass is faster. Both however perform well in this regard.

The Sirius’ mid-bass is more enhanced and its midrange is slightly warmer, but overall average note thickness is close. Both monitors have a warm midrange with good vocal articulation, with the 8.2 having slightly more presence in the center midrange compared to the Sirius’ upper midrange, as well as slight differences in their instrument timbre, with the 8.2 sounding slightly more natural and uncolored. Similarly, they share a smooth and non-fatuiging treble tuning. While they share similarities in their signature, the main differences consist of the 8.2 being tuned more neutral and linear, with the Sirius having more upper midrange presence as well as a more spacious stage.

Lime Ears Aether (€1150)
The 8.2 has a wider stage, with an instrument positioning slightly closer to the listener. The Aether’s stage is on the other hand a bit deeper, which gives it more space for layering. In addition the Aether’s stage is airier, although the 8.2 comes close depending on the source. Both however display good separation, with the 8.2 relying on its width and the Aether on depth, while both also have good imaging. The 8.2’s bass has more impact than the Aether’s in the low setting with similar definition, while having similar impact and more definition in the Aether’s up setting. Due to the Aether’s emphasis of mid- over sub-bass, the more linear 8.2’s bass has the better texture and impact.

The 8.2’s midrange is warmer and slightly denser than the Aether, and vocals are positioned closer to the listener with more depth, emotion and better articulation. The 8.2’s treble is more laid-back in the overall presentation. While the Aether’s treble isn’t particularly sparkly either, it has a very characteristic smooth and natural tonality. In addition, it has slightly better extension. Both have a signature that approaches neutral, albeit with a different twist: the 8.2 has a more mid-centric signature that gives it a slightly warmer and more forward sound, where the Aether’s slight V-shape gives it a more open and airier sound. 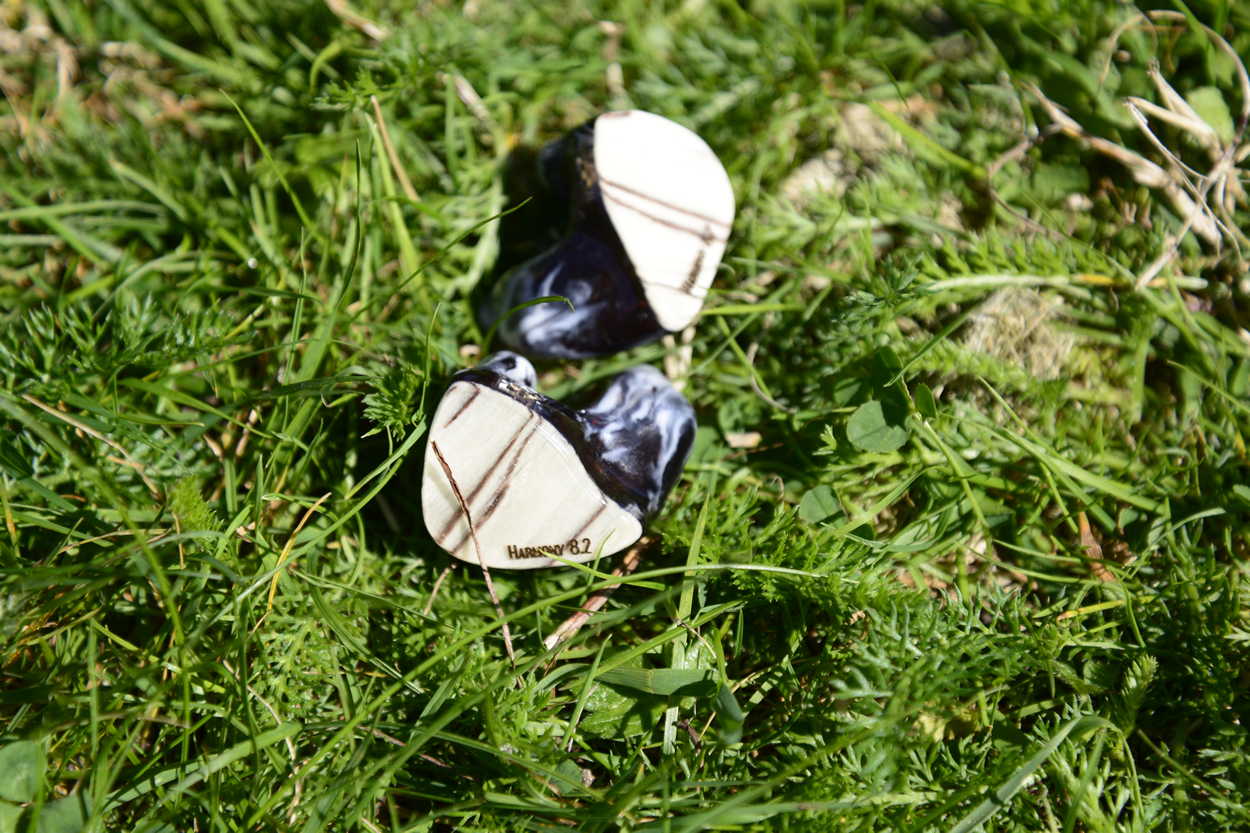 EarSonics S-EM9 ($1490)
EarSonics’ 9-driver flagship contrasts the mid-centric 8.2 with a technical and U-shaped signature. Its bass is punchy with high quality treble, though a slightly dry and distant midrange is its weakness. Like the Aether, the S-EM9 has a box-shaped stage, compared to the 8.2’s wide stage; the 8.2’s stage is wider, while the S-EM9’s is both taller and deeper. The S-EM9’s stage is airier, and the combination with better layering gives it an advantage in separation, due to the overall cleaner stage.

Both have excellent bass, with the S-EM9’s hitting slightly deeper and punchier, and the 8.2 having a slightly more natural texture and decay. The S-EM9 has a more distant midrange stage positioning: notes are positioned further away, and are on average leaner. The 8.2 has a more intimate vocal positioning, sounding warmer with greater density. Overall the 8.2 has a more enveloping midrange, better at conveying emotion with slightly thicker notes, even though the S-EM9 has the better midrange resolution. The 8.2 takes points for its midrange, while the S-EM9’s bests the 8.2 in treble precision and extension.

Rhapsodio Solar ($1550)
The Solar’s stage has similar width, but is slightly deeper and taller. Its bass is north from neutral – by a safe margin. Overall, its bass is significantly more enhanced than the more neutral 8.2, specifically its mid-bass. This gives the Solar more impact, while also creating thicker notes as well as a warmer atmosphere. While this gives the Solar a fuller sound, the midrange itself does not have greater density. The Solar’s upper midrange is warmer and smoother, with the 8.2 has more clarity as well as a more natural timbre. The two are close to even when it comes to midrange resolution and transparency.

The Solar has a bit more treble sparkle and definition, as a 5 KHz treble lift counters its powerful bass and adds some clarity. Due to the relationship of the 8.2’s treble to the midrange, it has an advantage in midrange clarity; notes are articulated slightly clearer, while the Solar’s presentation is smoother due to the warm mid-bass air. Taken together, the two are more different than similar. Due to its bass, the Solar sounds thick and conveys a great sense of power. But its bass won’t be for everyone. The 8.2 is overall more neutral and linear in both its presentation and signature. 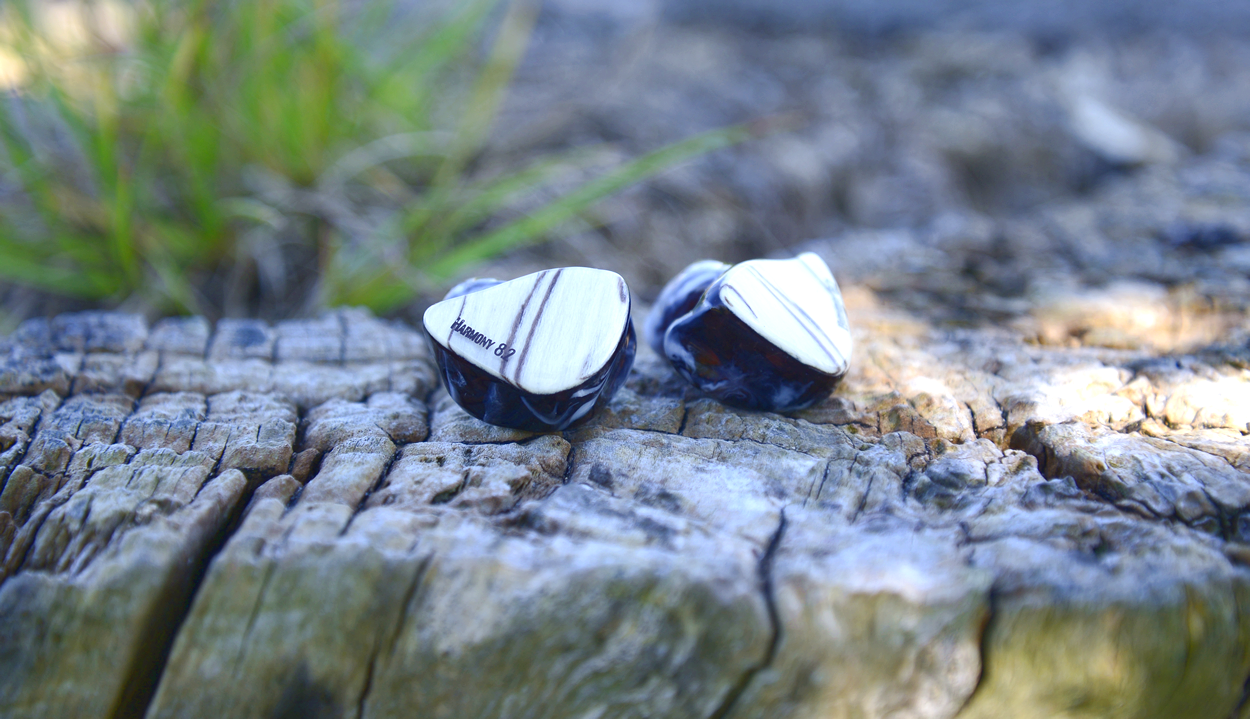 The 8.2 has a very neutral presentation, tuned with slightly warm and engaging mid-centric signature. The stage impresses with its width, while its bass will serve as a reference point for future comparisons. But most of all, its presentation is very smooth and natural. The treble tuning comes down to preference; it is purposefully designed as non-fatuiging, to ensure long listening sessions as well as being applicable for stage monitoring. On the other hand, it probably won’t suit listeners that value a certain amount of sparkle and overall treble quantity. But overall, the 8.2 has a lot to offer, while I can’t fault it much.

I have noticed the 8.2 pairs significantly better with a neutral source like the 901S or Lotoo Paw Gold, compared to a warmer dap like the Plenue S. While the combination also has its charm, it reduces the airiness within the stage significantly, emphasizing a mid-centric rather than neutral tonality. The warmer pairing can be a bit too much, although like always, this will come down to preference. I personally feel a neutral to bright source can balance the 8.2 and really make it shine, although a warmer source can add a nice emotional touch.

When you’re reviewing a revision, you ideally want the final section to consist of a remark to the former model. This would without a doubt have consisted of a compliment to Piotr on a very successful revision of his former flagship. Unfortunately this is my first encounter with the Harmony, so I can only give him a more general compliment on the tuning, but I’ve seen many positive comments affirming this.  A select number of people were fortunate to purchase the 8.2 at an exceptional discount, but even at its MRSP, the 8.2 offers a taste of high end monitoring at a very reasonable price.