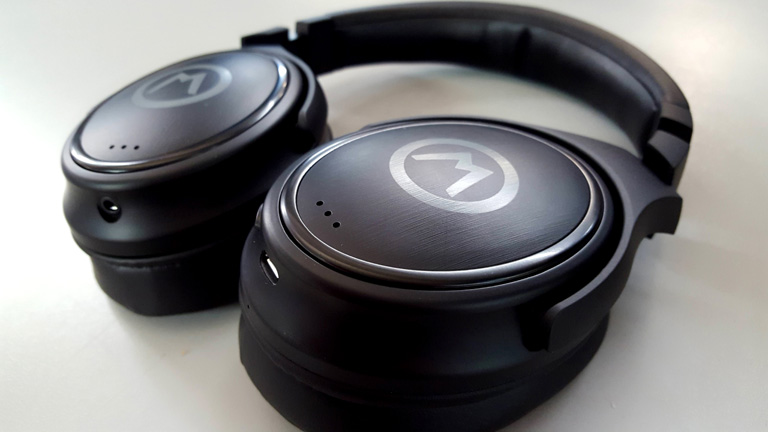 The M&O Beryllium Acoustic Bluetooth Headphone conveys a warm, rich character. A friendly, organic sound is the intent, while notions of detail, resolution and analysis are left behind.

Bass is front and center in the tuning. It’s elevated a good bit, both sub-bass and mid-bass. We’re not talking basshead levels here, but there’s certainly a healthy amount. Texture and rumble are in abundance. Deep lows imbue your music with a visceral punch. There’s a size and dimensionality to MOOH’s bass you don’t hear in many cans. It’s delightful.

Vocals are colored by the bass, though not to the extent where details smear too much. MOOH’s mids have lushness to them, warm and smooth. They exist slightly behind the bass, lacking clarity. What you get in trade is great note weight and authority. Make no mistake, they sound engaging, fun, and natural enough.

Treble is the least noteworthy thing about the M&O. It sits below the mids, and well below the bass. There’s just barely enough to hold back the tides of darkness from all that low-end. MOOH’s high frequencies possess quite a helping of warmth, making for a velvety, easy listen. MOOH is a safe headphone for those worried about treble fatigue and harshness. However, unlike the bass, I don’t feel the treble enjoys great extension. It sounds like it rolls off pretty drastically, taking away air and natural sparkle. In fact, the upper registers come off unnatural, truth be told. If it weren’t for these highs, one could forget they were listening to such inexpensive gear. But instead, they cast a kind of cheapness over the whole production which keeps MOOH from excelling beyond its price point.

Soundstage is unimpressive; neither terribly small, nor large enough to recreate the venue. Imaging is decent, but not great. Separation is a real weakness of MOOH’s. Due to poor resolution and clarity, the instruments are not well-defined, and one sound can blend too easily into another. And finally, transparency is quite simply sub-par. These headphones are thick, indistinct, and lacking air. You NEVER forget you’re wearing them.

The DDAudio DXB-04 ($99, Review HERE) are not Bluetooth capable, but they are in the same price range, so I consider them a fair comparison. The sound is much clearer, more detailed and better defined. The bass is amazing, yet unlike MOOH, isn’t bloated and bleeding into the mids. The vocals are thinner, but far more transparent and articulated. And the treble… oh the treble. It extends beautifully into the very highest range. It’s smooth, linear, and fills the stage with so much light and air. All without straying into brightness. Soundstage is not incredible, but it does expand farther than MOOH. As much as I enjoy the M&O cans, if you don’t need Bluetooth, the DXB-04 is a significantly more balanced performer.

Bang&Olufsen’s H9 ($500, Review HERE) is a Bluetooth doohickey. But this one is four times the price of MOOH. It does Active Noise Cancellation (ANC) and has a whole slew of controls. It’s more comfortable, and more premium in construction. All things you’d expect for half a grand. Sound-wise, it’s clearer, sharper, and renders at a higher resolution. The bass can be even more extreme than MOOH, especially when running them as a traditional headphone. In fact, it can be down-right headache-inducing. On the other hand, upper bass dibs down enough that it doesn’t bleed into the mids nearly as much, allowing for more transparent music. The treble has greater extension, presence, and naturalness. Soundstage is bigger in all directions, achieving good depth. The H9 is not a fair fight. I understand that. But it’s an interesting one, to see what a couple hundred extra can get you.