My first experience with a high-end IEM was a second hand EarSonics SM64, recommended by a friend. I was just starting out in this hobby, void of all experience or relevant knowledge. He also gave me the following advice: “You totally need to buy a cable as well, just in case the original cable breaks. Plus they look good.” So I sauntered through the For Sale fora again, and randomly bought a Whiplash TWag V2. When I tried the combo, it seemed to combine well, making the darkish SM64 a little bit clearer and nicer, although admittedly I couldn’t tell for sure. But when my SM64 broke and I replaced it with the Velvet, the pairing was suddenly completely off: void from warmth from the bass, the Velvet sounded cleaner, but drained from all emotion. This was not working! So I drifted around a bit, experimenting with a few second hand cables, until I stumbled on the Toxic Silver Widow based on a recommendation from a friend. Everything fell in place – the stage was clean, but it still felt lively and full. I felt the sound was truly ‘upgraded’: a pairing that brought the best out of both the Velvet as well as the Silver Widow. It was a pairing that kept me more than satisfied for a long time, even after I bought TOTL iems twice the price of the Velvet. The cable virus was real, and until this day I have not managed to find a cure.

A while back I started talking to Frank, about cables of course and the biz. So he offered to send over his 22 and 24 AWG to try, since I had previously owned the older 25.5 version. Although I have been trying to hold off on all reviews due to the upcoming IEM shootout, I couldn’t resist trying for the sake of nostalgia. I guess we all have a sentimental side, and the Silver Widow had a special place in my heart as the first cable that really ‘clicked’ with me.

Frank has seriously stepped up the quality of his build since I previously owned one. The look and feel of these cables just exudes quality. Admittedly, the thick gauge doesn’t make them the most flexible or ergonomic, but I personally love the feeling of a solid a cable. When you hook up this cable to your source, it gives you that feeling it can conduct a massive amount of power. The finish of the connectors, splitter, and slider, looks like the end result of a successful evolution of trying different components, until every last part was perfect. The silver connectors match the slider, and contrasts the carbon splitter and jack. Importantly, the parts are lightweight in use. In the olden days, Frank used a heavy metal plate that I wasn’t particularly fond of. Besides the blingy look, there was a noticeable pull, so I ended up unscrewing it. But these look simply fantastic. The main difference between the two is the thicker gauge of the 22 AWG, resulting in thicker wires. When it comes to looks, I actually prefer the 24 AWG as the individual strands composing the main wires are smaller, making the wires look more refined. 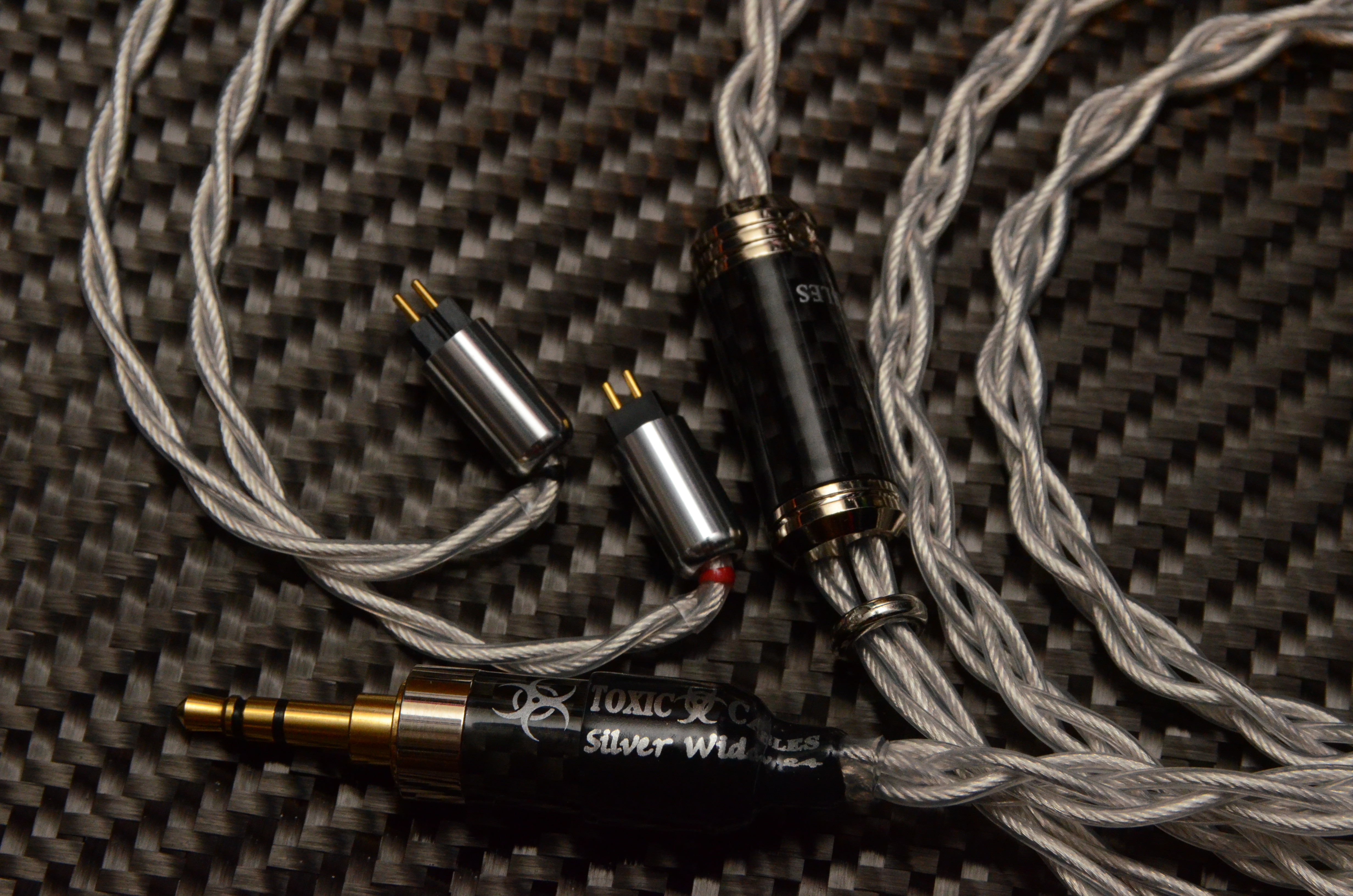 Frank suggests to burn the cable for 100 hours. I would advise to follow these instructions. Take a listen when you first receive the cable, then put it on to burn and try again after 50 or 100 hours to hear the contrast. There is a trace of harshness common to silver cables fresh out of the box, that smoothens out after burn.

Toxic 24 AWG
The Silver Widow 24 follows a U-shaped presentation with laidback lower mids, and an enhanced lower treble response. Accordingly, the overall clarity and separation benefits from its presentation.

The bass plays a central role in the Silver Widow’s presentation. Specifically, the mid-bass is attenuated, resulting in a slight reduction of the overall body of the bass. However, as the sub-bass is plentiful in quantity, the bass is nevertheless significant in impact with a satisfying amount of power in the low end. As the balance within the bass has shifted from the mid- to sub-bass, this results in a slightly darker bass tone. However, the bass as a whole is tighter, quicker, and more controlled.

Due to the improved control of the mid-bass, the Silver Widow creates an airier stage structure, by reducing the warm air. In addition, there is less fill towards the lower midrange. Accordingly, notes resound more clearly with higher definition, even though they are relatively less full. As a result, there is more clean space between instruments, which benefits the separation. Simply put, the controlled mid-bass of the Silver Widow cleans up the stage, creating a more organized environment due to the clean air, combined with the slightly leaner note structure. Even though the stage is not overly deep, it feels more spacious and precise.

Vocals retain their density and power, but are slightly less warm and forward in accordance with the mid-bass. The vocal presentation leans towards clarity and articulation, especially due to a lift in the lower treble. This creates a slightly brighter tone, effectively boosting the overall clarity. Accordingly, the Silver Widow is more upfront in its detail presentation. The slightly brighter tone not only boosts the detail retrieval, it gives the Silver Widow an energetic and dynamic sound.

Toxic 22 AWG
The bass presentation of the 22 largely follows that of the 22 in tone and balance. However, the sub-bass hits slightly deeper, with better separation between the sub- and mid-bass. In addition, the bass hits with slightly more authority.

Overall, the sound of the 22 is smoother than the 24, due to a more linear lower treble. Accordingly, there’s a more natural flow of the music, where the 24 has a bit more bite and energy, that however might result in edginess with already bright iems. Compared to the 24, vocals are slightly more natural and intimate, and fuller in size. Despite this being a silver cable, the midrange retains its density, the core body of notes, as well as its vocal power. In addition, the 22 has greater transparency than the 24, resulting in a more realistic presentation.

With the 22 awg, the stage is cleaner, but the tone itself is not necessarily brighter, or at least not predominantly so. However, it will appear clearer because the stage is less warm. A better way to imagine this is to think of it as follows: when we think of a brighter sound, an analogy would be that the light is ‘turned up’, like switching on a fluorescent light. With the 22, the background light is turned on, lighting the stage on which the instruments play up, though not necessarily brightening the instruments themselves. However, as the janitor was kind of enough to turn on the light, we can more easily detect the location of the different instruments, and with greater precision. The great advantage being that despite the clarity of the presentation, the sound remains relatively smooth. 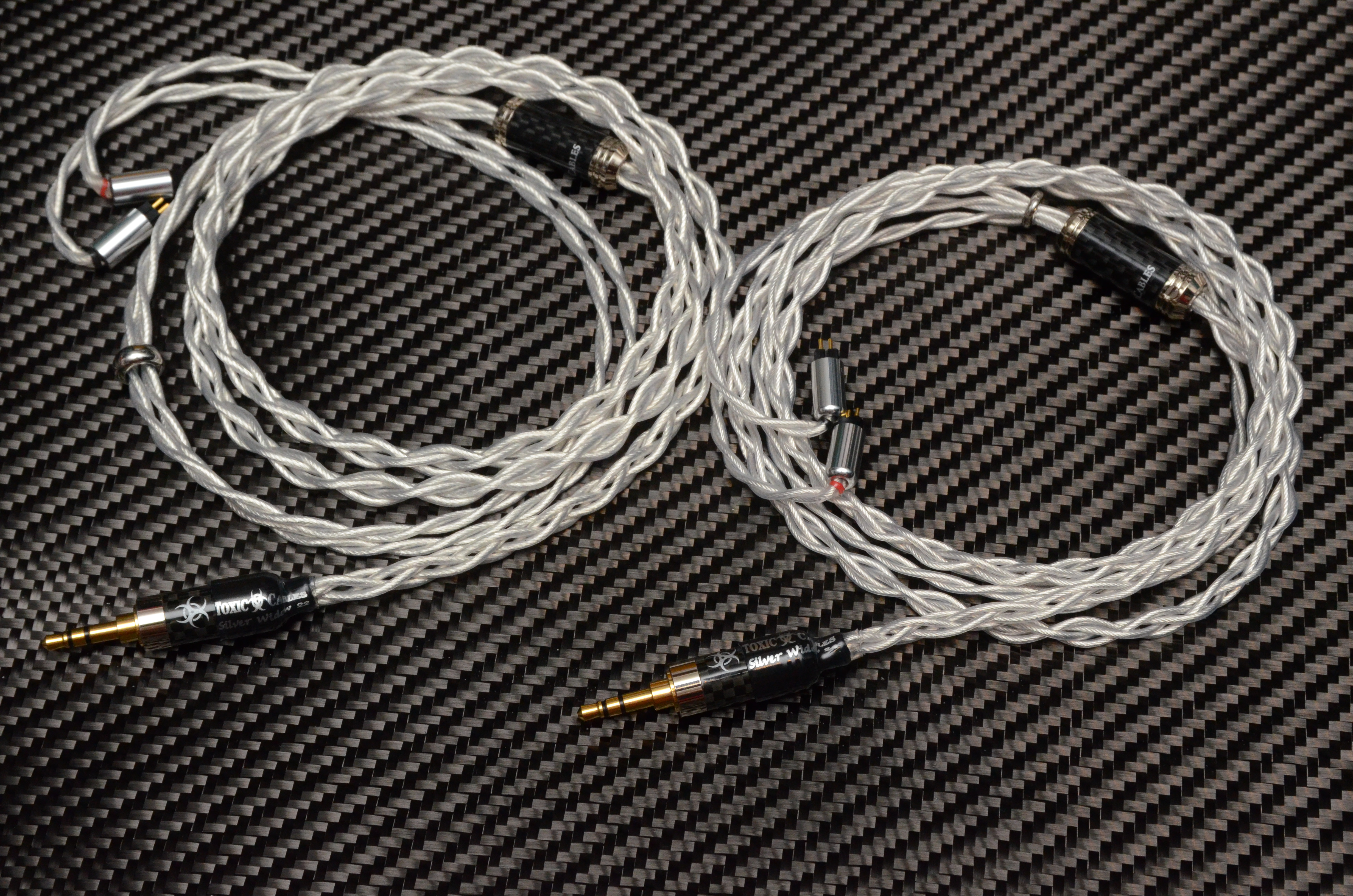 When it comes to cables, the Toxic Silver Widow 24 offers excellent value for its price. When you go higher up the ladder cables will steadily improve in performance, but the associated cost multiplies. But I find that a cable like this is at the very peak of the price-to-performance ratio. So I’m awarding the 24 AWG with the extremely prestigious flinkenick cable value award. That being said; if you’re going for a Silver Widow, I would recommend the 22 AWG. I personally feel the price difference is warranted for the smoother, and more transparent sound.

I will soon be starting the review shootout series of 17 flagship iems. As a bonus, I will be giving away some nice stuff to whoever can predict the top 5 finishers, or at least come close enough. So far there’s a Fidue Sirius and SilverFI IEM-X cable to be claimed. However, there’s more – Frank and I have decided to provided one of his (now) award winning 24 AWG Silver Widow’s to complete the prize selection!