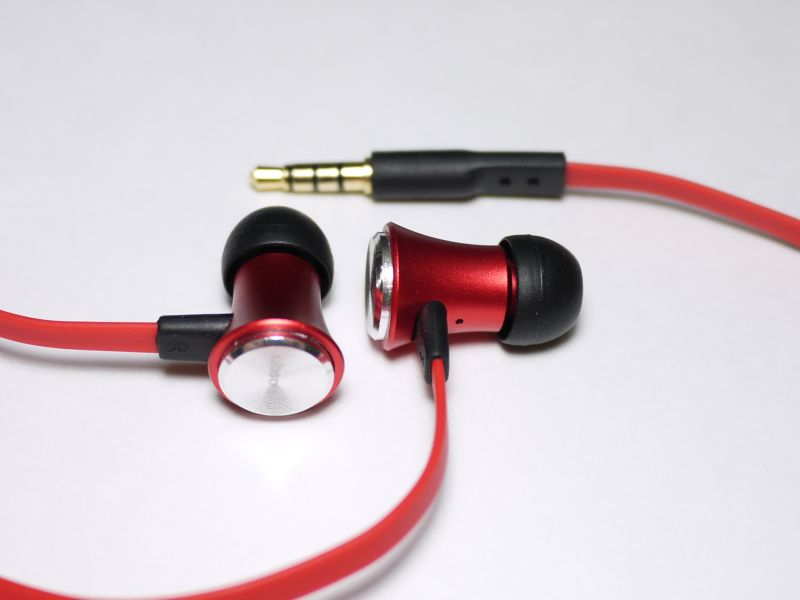 Accessories (2/5) – Single-flange silicone tips (3 sizes) and drawstring carrying pouch
Build Quality (3.5/5) – The Fighter is a lightweight, aluminum IEM with a flat cable. There is a mic and 1-button remote on the cable, and the earpieces and I-plug are properly relieved. The raised L/R markings on the strain reliefs are difficult to see in low light
Isolation (3/5) – Average for an earphone of this type
Microphonics (3/5) – Bothersome when worn cable-down; good over-the-ear
Comfort (4/5) – The housings are longer than we’ve seen with other earphones that share this sort of flared shape, such as the RHA MA350 and Dunu Trident, but are surprisingly lightweight and comfortable. In smaller ears the outer diameter may be tricky to fit properly, but for most these should be just as comfortable as any other lightweight, straight-barrel IEM. Over-the-ear wear can be tricky because the flat cable lacks a cinch

Sound (7.6/10) – The UBSOUND Fighter is a bass-heavy in-ear earphone with a warm and smooth sound signature. The low end is well-extended, with a nice balance of sub-bass and mid-bass – exactly the kind of thing I like to hear from basshead IEMs. Control is also pretty good considering the bass quantity and mid-level price tag.

The midrange sounds somewhat recessed, as expected with this level of bass, and has only average clarity. A contributing factor on top of the dominant bass and midrange recession is an upper midrange dip. A dip like this is not uncommon among higher-end Balanced Armature-based earphones, as those often have detail and clarity to spare and just need to sound a little smoother, but it is not something often seen with bass-heavy dynamic-driver sets.

As a result, the Fighter has lower vocal intelligibility than similarly bass-heavy sets with a more v-shaped response – for instance the Brainwavz S1 – though there are many lower-end earphones that sound still muddier and more veiled through the midrange. The dip in the upper mid region has another effect – the Fighter sounds very smooth, which is most noticeable when comparing it to earphones that aren’t normally considered harsh, such as the Nuforce NE-700X. At higher volumes, its inherent smoothness can make the Fighter sound more natural despite sacrificing some clarity.

In fact, that’s the real asset of the Fighter – it is smooth and non-fatiguing even at high volumes, yet carries decent overall treble energy. The Fighter is far from the crispest, clearest-sounding IEM in its price range, but there are earphones with even warmer sound that – at reasonable listening volumes – tend to sound downright treble-deficient compared to the Fighter. The presentation of the Fighter, likewise, doesn’t have the greatest depth or air but is not small or overly congested.

Compared to the NarMoo S1, an enhanced-bass earphone currently included in our Earphone Buyer’s Guide, the Fighter is similar only in the general sense of being quite bass-heavy. The S1 follows a more v-shaped sound signature with even punchier bass and brighter – but also harsher – treble. It is clearer and has a wider soundstage while the Fighter is smoother, which at times makes it sound more natural. The Fighter has more recessed mids, especially upper mids, and vocals sound less clear and intelligible as a result. However, it is much more forgiving of sibilance and maintains composure better at louder volumes.

The Twinwoofers from India-based Tekfusion are a better sound signature match for the Fighter than the NarMoo S1 but are not able to keep up with the UBSOUND in performance. The Twinwoofers have more bass, but also more bloat, sounding boomier as a result. The Fighter, while less bassy, is still quite impactful and has a similarly warm tone. Its mids are a little recessed compared to those of the Twinwoofers, but overall the Fighter is clearer, smoother, and more refined, making the Twinwoofers sound a little harsh in comparison. Overall, the Fighter is quite a bit better.

The second-generation Beats by Dre Tour is a respectable bass-heavy IEM, but does not have much of a performance advantage over the less expensive Fighter. The Tour is a little warmer overall thanks to a slightly larger mid-bass hump, whereas the Fighter is a little more balanced and neutral. The Fighter has better treble energy, yet is even less harsh and more forgiving than the Beats thanks to its upper midrange dip. The tuning is a two-sided sword, however, as the Fighter is also less clear as a result of that same dip. Overall, I ended up preferring the Beats at low-to-medium volumes but at highest volumes the smoother nature of the Fighter was a strong asset, allowing it to remain more natural-sounding.

Value (8/10) – The UBSOUND Fighter is a unique-looking, lightweight, surprisingly comfortable earphone with the caveat of a slightly microphonic flat cable. The performance of the earphones hinges on plentiful bass – not unusual in this price range – but sets itself apart with a smooth (perhaps even smoothed-over) sound courtesy of a recessed upper midrange. It is not a hallmark of balance and accuracy, but it was nearly impossible to extract any sort of harshness from the earphones, and just for that it’s likely to be a great match for many bass-loving listeners.