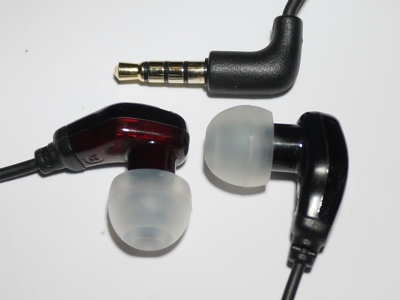 Accessories (4/5) – Single-flange silicone tips (3 sizes), Comply foam tips (2 sets), and hard plastic carrying case
Build Quality (3.5/5) – All-plastic construction, color-coded nozzles, and chromed housings are all reminiscent of the lower-end UE earphones. The cable is identical to the one used by the UE 700 – soft and flexible, but plasticky and not very well-relieved
Isolation (3.5/5) – Nozzles are long and lend themselves to deep insertion fairly well. Isolation is good but still lags behind many pricier BA-based earphones
Microphonics (4.5/5) – Quite low in the soft and flexible cable, and can be eliminated completely with over-the-ear wear
Comfort (4.5/5) – The curved shells and long nozzles of the SF5 allow them to be worn either cord-up or cord-down quite easily, though the position of the mic suggests over-the-ear wear. The housings are very light and rarely come in contact with the ear, much like those of the Phonak PFE and Future Sonics Atrio earphones

Sound (8.6/10) – Originally known as the Ultimate Ears Super.Fi 5, the single-armature UE 600 took its spot in the UE lineup over from the dual-armature Super.Fi 5 Pro model. Sonically, it differs greatly from its predecessor, taking on a more balanced and accurate sound. At the low end, the UE 600 sounds like a typical single-armature earphone, lacking the enhanced bass of UE’s dynamic-driver models. The bass is very level and controlled, with impact that is on-par with the Etymotic Research HF5 and lags slightly behind the MEElec A161P.

The midrange, on the other hand, is more prominent. The UE 600 places the mids front and center. It is still more neutral than the vast majority of entry-level earphones but for me sounds slightly mid-centric, albeit very clear and refined. This could be due to an impedance interaction with my sources, but it is consistent across all of the ones I’ve tried. Tonally, the UE 600 is a touch warmer than the UE 700 and other TWFK-based sets, as well as the Etymotic HF5, but detail and overall transparency are still very good.

The top end of the UE 600 is clean and smooth, if not particularly sparkly. The UE can’t quite match the delicacy and detail of the HiFiMan RE-400 but still impresses with the slightly relaxed nature of its treble. There is absolutely no grain and the earphone tends to avoid harshness and sibilance. It is also not overly critical of lower-bitrate files. I would say this was done on purpose due to its low price point, but the flagship UE 900 model has similar tendencies. Admittedly, the UE 900 does have better treble presence, energy, and extension, sounding more natural overall, but there is also a huge price gap in play there.

The UE 600 possesses an impressively wide soundstage but doesn’t keep up too well with higher-end earphones. I found it lacking overall dynamics and the separation of higher-end sets such as the quad-driver UE 900 model. As a result, the soundstage has comparatively poor depth and layering and the overall sonic image is a bit flat, much like that of the similarly-priced Creative Aurvana In-Ear 3.

Value (9.5/10) – The UE 600 is a little plasticky in build but remains lightweight, comfortable, and fairly well-isolating courtesy of the included Comply eartips. The sound is neutral to somewhat mid-centric, with very good clarity, decent bass presence, and smooth, forgiving treble. It sounds great with music and is especially well-suited for audiobooks and phone calls with its forward, highly intelligible vocal presentation. Simply put, it’s a great fit for anyone in search of a comfortable earphone with excellent mids.