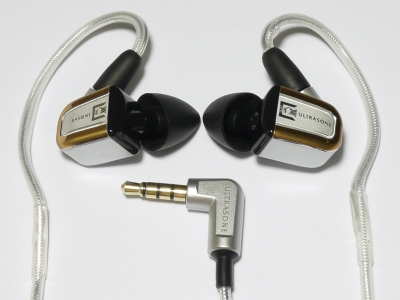 Accessories (4.5/5) – Single-flange silicone tips (3 pairs standard, 2 pairs cone-shaped), Comply foam tips (2 pairs), spare cable with inline mic/remote, TRRS smartphone adapter, airline adapter, and magnetic-clasp carrying case
Build Quality (5/5) – The build is rock-solid, boasting sturdy die-cast housings and detachable cables with coaxial connectors. Filter-less nozzles, together with the lack of a wax loop in the accessory pack, may be an issue for those with waxy ears, though the included Comply tips provide wax guards. The clear-coated cables are soft and flexible, similar to the cords on MEElectronics earphones
Isolation (3.5/5) – Isolation is above average with the stock silicone tips and better with the included Comply foams as well as my preferred triple-flanges
Microphonics (5/5) – Nonexistent in the coated cable
Comfort (3.5/5) – The housings are cube-shaped and on the large side, holding both a balanced armature and an 8mm dynamic driver per side. The profile reminds me of the Earsonics SM3 and the overall volume of the housings isn’t much bigger than some of the mutli-armature sets on the market. However, “cube” is not the most ergonomic shape in the world and the housing corners can cause soreness after some time unless longer tips are used to allow the housing to sit farther outside the ear

Sound (9.3/10) – Ultrasone’s first in-ear monitor utilizes a hybrid driver system with an 8mm side-mounted dynamic driver and a single balanced armature. Quite a few hybrid setups have been released in the past year but it is still an unusual choice for a company’s first foray into IEMs. Happily, Ultrasone pulls the IQ off rather well, with the exception of one issue – the tuning seems to favor a deep insertion while the included eartips, in conjunction with the large housing, favor a shallower fit for average-sized ears.

With the stock tips the treble response of the IQ peaks heavily right in the sibilance region, making many tracks sibilant and some – downright uncomfortable. The silicone tips are the worst offenders, followed closely by the Complys. After a few hours of tip rolling, I found the Etymotic triple-flange tips to cut the sibilance completely while retaining an acceptable amount of treble energy for me. An inline impedance adapter can tame the treble a bit more, likely due to the non-linear impedance characteristic of the balanced armature driver. Using both the Etymotic tips and impedance adapter together results in a drastic change but proved unnecessary, so this review and the subsequent comparisons were all done with the Etymotic triple-flange tips as the only modification to the IQ.

No matter the eartips, the bass delivered by the 8mm dynamic driver of the IQ is surprisingly poised and precise. The IQ is an enhanced-bass earphone, no doubt, but the bass is textured, quick, and not at all overbearing for a dynamic-driver set. It is somewhat reminiscent of the AKG K3003 in this respect. Bass extension is good, with plenty of sub-bass rumble, and the overall impact is still impressive, in the realm of the armature-based Phonak PFE 232 and FitEar TG334. Bass bleed is minimal and the IQ, again like the K3003, does not sound particularly mid-recessed despite its v-shaped sound profile.

The midrange is clean and clear, with surprisingly little warmth for an earphone with such robust bass. The mids are lagging in emphasis compared to the low end but not enough to warrant being called recessed, and the upper midrange and treble have good presence. Despite the treble spikes that annoy me with the stock tips, the IQ is not a particularly bright earphone – it doesn’t have the treble energy of the AKG K3003 or the Audio-Technica ATH-CK10, for example; it just seems to hit all of the sibilance-prone areas. The treble presentation with the stock tips does hurt tonality, reminding me of Ultrasone’s HFI-780 headphone – a fun but slightly metallic-sounding full-size set. The HFI-780 never appealed to me over Utrasone’s more balanced Proline models, and the IQ likewise is a tad too colored with the stock eartips. With proper eartips it remains only slightly harsh, to an extent that can be dismissed except when pitted side by side against something like the K3003.

In terms of presentation, the IQ is competent all around. It is a spacious-sounding earphone with a very consistent and even-handed presentation. Its soundstage is larger compared to many other top-tier universals, including the Phonak PFE 232, but doesn’t stay as free of congestion due to the nature of the dynamic driver. Imaging, however, is good and the IQ can provide a very enveloping sonic presentation without sounding forward. It’s worth noting the high sensitivity as well – the IQ is well above average in this regard and is both revealing of source matching issues and very, very easy to drive.

Logitech UE’s latest and greatest is a quad-armature monster boasting excellent presence across the frequency spectrum and a sound signature somewhere between “neutral” and “Triple.Fi 10”. The UE 900 seems to miss out on the full, natural bass impact of the IQ’s dynamic driver but matches its low-end extension. The bigger, more dynamic bass of the IQ emphasizes the fun factor, but also scales up more convincingly on bass-heavy tracks.

The midrange of the UE 900 sounds a little muffled in comparison to the IQ, likely due to the upper midrange dip noted in my original review. The IQ remains flatter through the midrange, though its treble is not quite as smooth as that of the Ultimate Ears. I prefer the greater treble energy of the IQ once it is tamed with my aftermarket tips, but with both earphones using their stock fittings the UE 900 bothers me less. In terms of presentation, both sets are spacious and image very well, with no clear winner for me.

Yet another detachable-cable universal with a massive price tag and headset functionality, the PFE 232 is rather bassy for an armature-based earphone and proves to be good competition for the dynamic-driver bass of the IQ. Indeed, the bass presence of the two earphones is quite similar, with the Ultrasone providing a bit more punch and body. The overall sound of the PFE 232 is more v-shaped, with less prominent mids compared to the IQ. The lower midrange especially is set a little too far back with the Phonaks, which does them no favors when it comes to intelligibility. The IQ, meanwhile, sounds clearer and flatter through the midrange. Treble is a close call – both earphones have good treble presence and the Ultrasone only wins out in refinement when paired with aftermarket eartips, and even then just barely. The gray-filtered Phonak ends up just a touch hotter and thinner-sounding. The soundstage of the IQ is larger, providing a slightly more out-of-the-head listening experience and superior imaging.

Similarities between the K3003 and the IQ abound – each is a flagship product from a company with a history of headphone Hi-Fi, each uses a hybrid driver setup, and each has a borderline shocking sticker price. The K3003 utilizes a 3-way setup, with dual armatures handling the midrange and treble. Surprisingly, however, its bass driver is not as well-optimized as that of the IQ. The low end of the K3003 ends up sounding slightly more intrusive and less controlled, with the resulting fuller bass note leading to poorer coherence between the drivers compared to the IQ.

The lighter, snappier bass of the IQ affords it even less midrange bleed. Both earphones have minimal midrange recession and energetic, prominent highs. The K3003 (with the Reference tuning filter) has a bit more treble energy but still sounds smoother and more refined than the IQ. Both have large, well-layered presentations, with the K3003 having a slight upper hand when it comes to portraying a more convincing soundscape.

1964EARS’ triple-driver model is a high bang/buck earphone for those willing to invest in a custom-fit product. Compared to the IQ, the V3 pursues a more aggressive and intimate sound, with forward mids, an enveloping presentation, and very high sensitivity. The dynamic driver of the IQ can’t quite keep up with the speed of the V3’s bass but provides similar slam. The V3 seems less bassy due to the forward mids but its sound is overall more colored than that of the slightly v-shaped IQ. Neither set has the most refined treble, nor is picking a winner easier when comparing the broader soundstage of the IQ to the smaller but more 3-dimensional presentation of the V3.

The Miracle is a 3-way, 6-driver custom that, with the cost of impressions and shipping factored in, would be priced just above the IQ. The Ultrasone competes with this flagship custom monitor surprisingly well despite its more colored, v-shaped sound signature. As expected, the Miracle is flatter and more accurate overall, with mids that are less recessed, more extended treble, and a slightly broader presentation not bogged down with the heavier bass of the IQ’s dynamic driver. It is smoother and more refined, especially in the treble region, while the Ultrasone ends up sounding warmer and harsher. Still, the IQ provides a bassier sound with little sacrifice in the way of clarity and overall resolution – a feat in and of itself. It also does a good job of keeping up with the imaging and dynamics of the Miracle, which few other earphones, custom or universal, manage to do.

Value (7.5/10) – Ultrasone’s new flagship in-ear takes a page right out of the Edition playbook, providing an on-the-go listening experience for the well-to-do. The IQ is a top performer in many ways but seems to sound better with a difficult-to-achieve deep seal. It is an interesting proposition – an earphone that doesn’t quite impress out of the box but has tons of potential for those willing to work towards a good fit. Is this reasonable for such a high-end product? I’m not so sure, but the fact remains that the IQ can make a good case for itself in the sound department.

Audio quality aside, the Ultrasone IQ scores high marks for its superb construction, including die-cast housings, detachable cords, and soft, tangle-free cabling. Cable noise is nil and noise isolation is good compared to the Sennheiser IE 800 and AKG K3003. High sensitivity and a secure, over-the-ear fit add to its versatility. It’s not going to win over the value-minded, but the IQ is yet another simpler, easier alternative to spending copious amounts of cash on a custom-fit monitor.