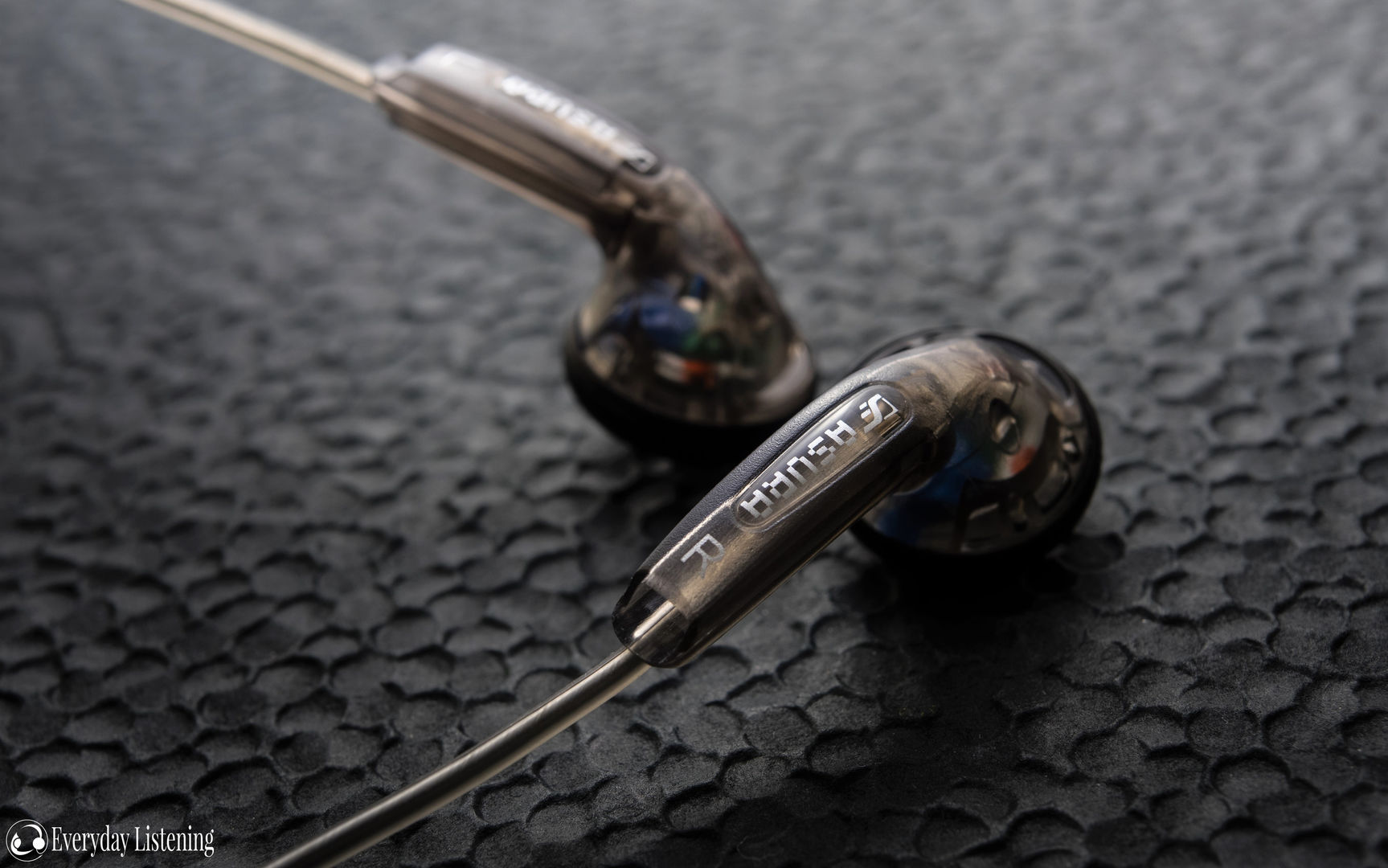 VE Monk+ ($5): The Monk+ really is a miracle in terms of price/performance and the earbud that has introduced to many to the hobby and form factor. Unsurprisingly, the Asura 2.0S offers a very noticeable step up though due to large differences in tonality, the Asura is not always the most logical progression. This is because the Monk+ was designed to be used with the included thin foams where the Asura 2.0S was designed for use sans covers. As a result, the Monk+ is considerably more bass focussed and darker overall. Without covers, the Monk+ is actually more mid-forward than the Asura 2.0S and with greater clarity to compensate for the dampening effect of those covers while the Asura 2.0S sounds downright muddy when equipped. I will be comparing the Monk+ with thin foams to the uncovered Asura 2.0S.

The Asura represents a significant technical upgrade to the Monk+; it is immediately more neutral, balanced and resolving. Bass is less extended but tighter and quicker with far more definition. Mids are brighter but still closer to neutral with a lot more resolution and a more natural timbre. Treble is the biggest differentiator, the Asura 2.0S is more forward, but extends far better regardless of whether the Monk+ is equipped with foams or naked. The Asura 2.0S is also far more detailed with greater nuance and more defined layering. Through this, the Asura also provides a larger stage and both imaging and separation benefit from its more neutral, linear and nuanced sound. The bassier Monk+ will no doubt have its fans and the jump to the more neutral Asura can be jarring, but given some time to adjust, the Asura provides details the Monk+ is incapable of producing.

Shozy Cygnus ($90): The Cygnus employs smaller Yuin shells with a nice frosted texture. They have a spectacular cable that is ultra-supple and are designed for use with donut foams, offering a generally more practical experience than the VE earbud. The Cygnus is subjectively more balanced with a slightly L-shaped tone built atop enhanced mid-bass presence, a clear midrange and a smooth high-end with slight lower treble emphasis. The Cygnus has more bass quantity and considerably better extension and rumble while the Asura 2.0S is tighter with greater bass resolution and speed. The Cygnus has a warmer tone that extends into its lower midrange. It has a darker, more natural and laid-back midrange presentation than the Asura but clarity is almost comparable.

Still, the brighter, more neutral Asura 2.0 sounds appreciably more defined and more transparent if thin and a bit over-analytical by comparison. Highs are the Asura’s forte, the Cygnus has some nice crispness to its lower treble but rolls off fairly quickly with less air and resolving power up top. The Asura 2.0S is more detailed by a fair amount with considerably greater treble attack and extension. The airier Asura, therefore, crafts a more expansive, layered presentation overall, however, the Cygnus still suits certain genres such as Classical better due to its greater bass extension. Overall, the Cygnus is more musical, the Asura 2.0 is more resolving.

Rose Masya ($109): The Masya is one of the few earbuds with a unique shell design however it is also one of the most ergonomically unorthodox due to their huge dimensions. These are definitely not for smaller eared listeners though they are manageable once adjusted and they do boast a very nice removable cable. Sonically, the Masya is most comparable to the Asura 2.0S, its dual dynamic drivers producing a similarly clear, neutrally bodied sound as the Asura. That said, the Masya is more balanced, perhaps slightly U-shaped depending on the level of seal with a similar bass tone to the Asura but with more presence in the sub and deep-bass regions. As such, the Masya produces more rumble, slam and impact without warming of bloating their bass response, they are almost as defined as the Asura 2.0S but have even greater separation between notes. Mids are also quite similar, the Masya sounds very clear yet its greater low-end presence grants vocals with more natural body, sounding more realistic as a result.

The Asura is slightly more resolving, however, with more defined layers and background detail where the Masya is on the periphery of diffuse. This same impression extends to the high-frequencies, the Asura 2.0S is slightly brighter but also more linear due to its lack of covers. As a result, the Asura is a little more detailed within the lower-treble than the Masya and more coherent heading into middle and upper treble. On the flipside, the Masya is smoother but still immensely clear reciprocating with superior treble extension that produces one of the most enormous soundstages I’ve heard from an in-ear device. However, as aforementioned, the Masya can sound a little diffuse, with certain details being pushed too far into the background and I would argue that the Asura 2.0S finds a better balance between space and coherence. Overall, the Masya is just as resolving with a more visceral bass response on top though the Asura 2.0S is considerably more ergonomic and coherent.

Shozy BK ($160): The BK utilises the same shells as the Cygnus with a matte black paint job and 8–core cable. Overall, it’s a more ergonomic, manageable earbud to live with than the tacky cabled Asura 2.0S. The BK is also designed to be used with donut foams but it is remarkably resolving considering. Tonally, the BK is well-balanced, slightly dark and laid-back but more linear than the Cygnus. The Asura 2.0S is still the more neutral earbud but the BK returns with greater musicality and dynamics combined with considerably better extension. The Asura has more mid-bass definition but sounds rather lifeless compared to the Shozy that delivers notes with similar transience and superior texture on top. Mids are more revealing on the Asura 2.0S with greater clarity while the BK is more natural with more realistic timbre. The Asura 2.0S is noticeably brighter and more mid-forward than the BK, both are well-layered though the Asura retrieves more background details.

The Asura is also more detailed than the more laid-back BK but by a much smaller margin than the Cygnus. The BK extends well if not quite as well as the VE and has the air and nuance but is less forward in its delivery and vastly more musical. The BK doesn’t have a huge stage but has a dark background and a very clean delivery that the Asura doesn’t match. Both image well, the Asura is slightly more pinpoint perfect and separated. Depending on the type of sound users are acclimatized to, they could prefer either, but the BK is the more balanced and tonally pleasing earbud whose superior bass performance does a lot to redeem their lesser high-end resolution. Still, the Asura 2.0S remains a strong contender for lovers of a bright, revealing sound.

The Asura 2.0S takes an interesting approach that nets some terrific strengths at the cost of some tonal weaknesses. It carries a rather unique signature combining excellent clarity with a relatively natural timbre and neutral tone. These qualities can be attributed to the earbud’s equally intriguing fit that discards all notions of seal in favour of crystal clarity and speed. Through this, the Asura 2.0S not only achieves almost IEM levels of nuance but also capitalises on the very open nature of earbuds, producing a wide stage with defined layers. Bass extension does suffer considerably, however, and this is most definitely not an earbud for those wanting a warm or bassy sound, though there are plenty of options offering that style of sound such as those from Shozy. Build quality also fails to impress, they are as generic as most earbuds with an especially difficult cable though again, fit will be familiar and comfortable for the vast majority as a result.

Verdict 7.5/10, There are other earbuds designed with the same style of fit and sound in mind, but the Asura 2.0S is one of the most refined and well-priced among them. They are generic and lacking some low-end solidity but their clear midrange and detailed high-end will cater perfectly towards lovers of a revealing, articulate and spacious sound with great pace.