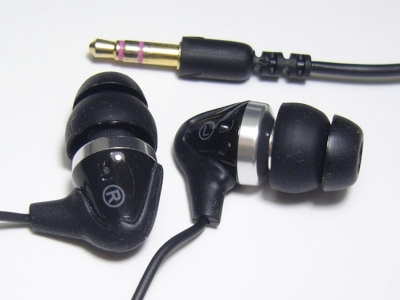 Accessories (2.5/5) – Single- (3 sizes) and bi-flange silicone tips, foamhybrid tips, and shirt clip
Build Quality (3.5/5) – Same generic IEM housings as the higher-end R02 and a handful of other earphones. However, the twisted Cu-Ag alloy cable used by the R02/R03 is replaced with a more conventional rubbery cord, which is thinner and more tangle-prone. Cable cinch is missing as with all other ViSang models
Isolation (3/5) – Very adequate for a ported dynamic IEM, especially with bi-flange tips
Microphonics (3/5) – Slightly noisy when worn cord-down, almost nonexistent otherwise
Comfort (4/5) – Same as with the R02 model – light and unobtrusive. Can easily be worn cord-up or cord-down. Work best with a relatively shallow fit

Sound (6.3/10) – The general sound signature of the R01 is similar to the two higher-end ViSang models, which should not come as a surprise since it shares most of the hardware (with the obvious exception of the Cu-Ag alloy cable) with them. The bass is smooth and full-bodied, with a mid/upper-bass hump and a tendency to warm up the rest of the sound signature. Bass depth, texture, and detail are certainly not on level with heavyweights such as the FA Eterna but beat most budget in-ears quite easily. The midrange is smooth and clear, slightly forward in positioning but still very well-separated and yet extremely coherent. The treble transition happens with no harshness or sibilance and the treble is laid-back and extremely smooth. The very top is rolled off and treble ‘sparkle’ is nowhere to be found but the highs of the R01 are certainly extremely competent, if not particularly aggressive or exciting, for an earphone of its caliber. Soundstage width is quite good and depth is adequate, though once again the R01 performs far better than the asking price would indicate. Compared to most budget in-ears, even great ones like the Meelectronics M9 and Fischer Audio TS-9002, the R01 is effortlessly spacious and presents music in a believable way.

But the sound of the ViSang R01 is not identical to that of the higher-end R02. In terms of signature the two earphones are extremely similar but the R02 is just that little bit better all-around, putting it head and shoulders above the competition. The R01 sounds like a softened and more relaxed version of the R02, but it is hard to imagine anyone finding the R02 too aggressive in the first place. The overall sound of the R02 is slightly crisper and clearer, with marginally better bass control and a bit more treble presence. As a result of the superior clarity, the R02 also seems to have more air and a more separated sound. The soundstage of the R02 is not huge but manages to be very believable while the R01 sounds a tad more constrained. The R02 also carries a bit more detail and I found myself pushing the volume of the R01 up a few notches to get the same level of detail out of it. Again, the differences are not great by any means but they are enough to make the R02 one of the best earphones in the <$100 range and the R01 merely above-average in the same category (though do keep in mind that the R01 costs a measly $30). Having both, I found myself reaching for the R02 every time without hesitation, but I would be far from unhappy if ‘stuck’ with just the R01.

Value (8.5/10) – The ViSang R01 promises the sound of the higher-end ViSang R02 in an even more reasonably-priced package. The ~$10 difference between the two accounts for the exclusion of the hard clamshell carrying case and Sony Hybrid knockoff tips from the accessory pack of the R01 as well as for the replacement of the Cu-Ag alloy cord with a more standard one. There are also minor sonic differences between the two which leave the pricier R02 a step above the R01 in overall sound quality. If you absolutely must only spend $30 on an earphone, the R01 is still the best way to do so. However, if tossing in the extra $10 to make the jump to the R02 won’t put you in the red for next month’s rent, I would recommend the upgrade. With the nicer cable and carrying case the earphones will last longer and the sonic differences, though probably not noticeable except in a direct comparison, are present nevertheless. At the end of the day either earphone provides great value for money but a few minor quibbles prevent the R01 from out-pacing its older brothers in bang/buck.

Pros: Time-tested design, class-leading sound quality
Cons: Not quite as stellar of an all-rounder as the R02 and only $10 cheaper