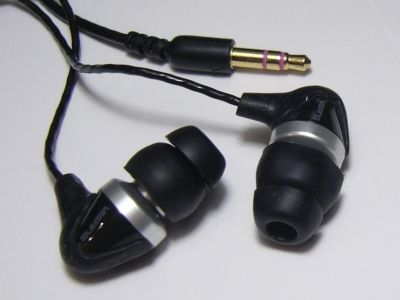 Accessories (4/5) – Single- (3 sizes) and bi-flange silicone tips, shirt clip, and clamshell carrying case
Build Quality (4/5) – Generic IEM housings used by Cyclone/Lear/VSonic but with short functional strain reliefs. Cable is identical to that of the ViSang R03 – a twisted Cu-Ag alloy cord that is tough yet flexible but lacks a cable cinch and has some long-term memory character
Isolation (3/5) – Very adequate for a ported dynamic IEM, especially with bi-flange tips
Microphonics (4/5) – Slightly noticeable when worn cord-down, negligible otherwise
Comfort (4/5) – Lighter than the R03 and very unobtrusive despite the slightly larger housings. Can easily be worn cord-up or cord-down. Work best with a relatively shallow fit

Sound (6.7/10) – Like the R03, the R02 boast a full-bodied and weighty low end with an emphasis on mid- and upper bass. The low end is very smooth and calm, completely unobtrusive until called for. The tonal balance is slightly dark, with a warmed-up midrange and treble that is devoid of sparkle. The midrange is right where it needs to be, clean and clear and with no lack of emphasis. Detail is very good for the price, though the R02 is certainly no RE0, especially in the treble. Soundstage width is quite good and seems to be one of the areas in which the R02 has the R03 beat by a very narrow margin. Depth is similarly average, though instruments are very well-separated and imaged.

The midrange transitions effortlessly into the treble becoming a bit more laid-back along the way. Treble smoothness is very impressive and extension is perfectly tolerable, though not class leading. The treble is never fatiguing – harshness and sibilance are terms the R02 is not familiar with. Overall, the treble of both ViSang earphones takes a backseat to the bass and mids, though I wouldn’t go so far as to call them recessed at the top. Like the R03, the R02 also surprise with their speed, which is very close to the much more expensive and very fast Monster Turbines, and natural timbre, which really puts most of the other sub-$50 earphones to shame.

As for the differences between the two ViSang models, they are minute and most likely resulting from the different acoustic properties of their respective housings. The R03 sounds a little bit thicker and more ‘concentrated’ in tone, with the R02 sounding slightly more diffuse in comparison, with less immediate bass punch and more ethereal positioning. The R03 seems to place instruments with slightly more precision than the R02 but again the differences are extremely minute. I am sure there are head-fiers out there who would be able to tell the two apart without a direct comparison but I am not among them and the average consumer probably isn’t either.

Value (9/10) – The ViSang R02 is yet another high bang/buck contender for the best sub-$50 IEM title and with its release of the R02, ViSang has nearly undercut their own higher-end R03 model . The sonic differences between the two ViSang models are small. What it comes down to is the generic housings used on the R02 versus the excellent metal shells of the R03. The R02 housings are slightly larger in volume and look a bit bigger in the ear. There are other small differences – such as the R02 being slightly susceptible to wind noise – but for many users I would expect the R02 to be the better deal.