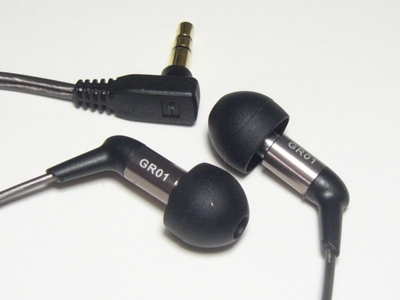 Accessories (3.5/5) – Single-flange (3 sizes), hybrid-style (7 sizes), foam-stuffed hybrid (3 sizes), and bi-flange silicone tips; padded spring-clasp carrying pouch
Build Quality (4/5) – The GR01’s form factor is of the slim, straight barrel variety, albeit with fatter-than-usual 4mm nozzles. The metal housings are reminiscent of the Klipsch Image X10. A rubber strain relief is present at the rear and the outer part of the nozzle, along with the metal mesh filter, can be (carefully) unscrewed and removed for cleaning. The cable is smooth but lacks a sliding cinch. A bump on the inside of the right strain relief makes the difficult-to-see L/R markings a non-issue
Isolation (4/5) – The GR01 isolates a little better than VSonic’s dynamic-driver models but not quite as well as an Ety HF5 or ER4
Microphonics (4/5) – Cable noise is bothersome when worn cable-down but becomes low with over-the-ear wear. The inclusion of a sliding cable cinch or at least a shirt clip would have helped in this regard
Comfort (4.5/5) – The housings are very slim and easy to insert deeply for a good seal. The sheer variety of included eartips should allow the fit to work for anyone, though earphones with slimmer nozzles might provide more options still. The cable exits at an angle so those with smaller ears may have trouble wearing the GR01 cable-up

Sound (9.2/10) – With the sound of VSonic’s dynamic-driver GR07 model so widely praised for its accuracy and balance, it should come as no surprise that the tuning of the armature-based GR01 had to be kept fairly similar in order for the new earphone to remain a proper monitor. Though the GR01 is based around the popular Knowles TWFK dual-armature driver – the same one used by the Audio-Technica CK10, Ultimate Ears 700, Fischer Audio DBA-02, and a number of other models – the engineers at VSonic have still added their own unique touch to the sound, making the GR01 the smoothest and most musical of the TWFK-based sets I’ve heard.

Though it doesn’t quite have the bass depth of the ATH-CK10, the GR01 is only missing a bit of extension in the lowest octave. The GR07, which has solid deep bass as a good dynamic-driver monitor should, easily trumps the GR01 here. The GR07 also has better impact and fuller, thicker notes. The GR01, on the other hand, is quicker and less impactful than the GR07 but still has slightly more drawn-out decay times compared to some of its more analytical competitors. In terms of punch, it is just behind the DBA-02 mkII and about on-par with a well-amped Etymotic ER-4S, but the real treat is the accuracy. Compared to the MA-based Final Audio FI-BA-A1, for example, the bass of the GR01 is significantly tighter, cleaner, and more accurate, and the same can be said – though not to the same degree – when it is matched against the GR07.

The lower midrange of the GR01 is a little more laid-back than is typical for a TWFK-based set, resulting in a safer sound. It is even slightly warmer than a UE700 or DBA-02, though the bassier GR07 is a warmer still. The natural clarity of the armatures is very good, though the smoother GR01 lacks a bit of the absolute transparency of the DBA-02 and Ety ER4S. Detail, similarly, is on-par with the CK10 and DBA-02 without being presented quite so aggressively.

At the top, the GR01 is surprisingly smooth and non-fatiguing, perhaps the most inoffensive of the TWFK-based dual-drivers. It is significantly less bright than the UE700 and lacks the hot treble of the CK10. It is also less prone to sibilance than the GR07, displaying a seemingly smoother response where the GR07’s treble peaks fall. The tone is kept fairly neutral and timbre is among the best I’ve heard from an analytical armature-based earphone. The downside is that there isn’t quite as much energy to the sound compared to the CK10 or DBA-02, resulting in a signature that may be too ‘safe’ for fans of analytical earphones but still to neutral and accurate to appeal to the masses.

The presentation of the GR01 is nice and spacious, yet very cohesive. Though it doesn’t quite have the soundstage width of the GR07, the GR01 is more well-rounded, with decent depth and a better on-center feel. There is still slightly more width to the stage compared to the DBA-02 and the GR01 is clearly more spacious and airy than the Final Audio FI-BA-A1. Separation is good as well, though imaging lags behind the CK10 a bit, partly due to the more elongated shape of the soundstage. Overall, the presentation is solid and reminds me of the Etymotic ER-4S, but those looking for an enveloping sound a-la Earsonics won’t find it here.

Value (9/10) – Though the VSonic GR01 strays little from the dual-armature monitor formula, it is one of the more competent such earphones I’ve heard, being neither overly bright nor fatiguing and managing almost all of the resolution of the more analytical Fischer Audio DBA-02. The GR01 has more going for it than just the sound, too – its slim form factor is very comfortable and the design shows good attention to detail aside from a few minor quirks. Construction is solid too, and there are enough tips included to accessorize several earphones comfortably. All in all, while the GR01 is not the direct GR07 upgrade many are doubtlessly waiting for, it is a very solid alternative for those who prefer a flatter sound signature.