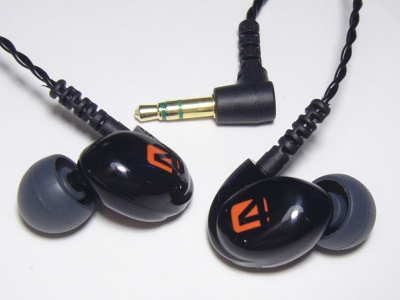 Accessories (5/5) – Single-flange conical (3 sizes) and rounded (3 sizes) silicone tips, triple-flange silicone tips, Comply foam tips (3 sizes), ¼” adapter, in-line volume control, filter and tip cleaning tool, and hard clamshell carrying case with carabiner
Build Quality (4.5/5) – The build of the W4 is almost identical to that the Westone 3. The housings are made of plastic and the multi-strand cables are twisted for extra strength. The y-split, housing entry, and 3.5mm L-plug are all very well-relieved. The 4R version adds a detachable cable
Isolation (3.5/5) – Quite good, especially with longer tips
Microphonics (5/5) – The W4 can only be worn over-the-ear and microphonics are nonexistent
Comfort (4/5) – As is the case with the W3, the shells of the W4 are quite ‘fat’ in comparison to those used by the Westone 1 and 2 and quite a bit heavier. The nozzle is also a bit short for my liking but, luckily, the sound of the W4 seems far less dependent on seal quality than that of the W3 so a wider variety of comfort-oriented tips can be used

Sound (9.3/10) – As the first quad-driver universal-fit IEM, the Westone 4 brings with it an undeniably high level of expectations when it comes to sound quality, especially considering Westone’s expertise in portable audio. Having heard all of the company’s universal models except for the aging UM1 and UM2, I can honestly say that the W4 rules the coop. The UM3X, W3, and W2 are all top-tier earphones as far as I am concerned but they are not perfect. The W4 isn’t either, but it’s a tad closer, blending the best traits of the W2 and UM3X in a single, easy-going package. Interestingly, though the specifications of the W4 are remarkably close to those of the W2, I don’t find the earphone to be as sensitive to source as the lower-end W2 and W3 models. It does not hiss with my netbook and its sonic flavor remains fairly consistent across a wide range of sources, much like that of the ATH-CK10 and my 1964-T customs.

First, a note on the fit – while the W4 uses the same ergonomically-styled but somewhat tubby housings as the W3, it is far more forgiving of a less-than-perfect insertion angle. As a result, jamming it as far as possible into the ear canal really isn’t necessary and shorter tips such as the included gray single-flange sleeves will work just fine for many listeners. Once fitted, the W4 immediately surprises with the tame nature of its low end – for an earphone with two dedicated bass drivers, the W4 has undoubtedly been tuned for quality over quantity. Don’t get me wrong – there is still more bass than there would be in a strictly ‘flat’ earphone such as the CK10 – but the quantity trails the powerful and aggressive W3 by miles. In fact, the W4 seems to have a bit less bass body than the UM3X and only a touch more than the W2. The quality of the bass is very difficult to fault – it is extremely linear and speed and control impress even next to the ruler-flat ATH-CK10 and my 1964EARS customs. The bass is also very slightly soft in nature, providing a good compromise between the tight and decay-shy bass provided by more analytical earphones such as the CK10 and DBA-02 and the smoother, thicker, and more full-bodied low ends of the UM3X, SM3, and SM2. For me, the bass of the W4 is always plentiful but never excessive.

The W4’s midrange again strikes a good balance between the forward and creamy-sounding mids of the UM3X and SM3 and the thinner, slightly grainier midrange of the W2. In direct contrast to the slightly recessed midrange of the W3, the mids of the W4 are just a bit forward in the soundscape. They are also slightly warm and extremely smooth. Detail and resolution put the W4 on-par with other top-shelf earphones but clarity is still hindered slightly by the thickness in comparison to the CK10, DBA-02, FI-BA-SS, and other clarity-focused earphones. To me, the midrange presentation of the W4 sounds quite natural both in texture and tone but it really wouldn’t be much of a stretch to call the W4 a mid-centric earphone. In this particular case, however, the mids are so polished and refined that having them as the focus of the sound signature is fine by me.

The treble of the W4, too, achieves a compromise between the other Westone models. It is not as hot and exciting as that of the W3, nor is it as dull and lazy as that of the UM3X. Instead, it is smooth and inoffensive, with good extension and solid presence across the range. Detail is excellent as well and while the W4 isn’t nearly as sparkly or energetic as the ATH-CK10 or Fischer DBA-02, I can’t image anyone taking offense with its treble, either. It is definitely a sweet-sounding earphone on the whole, though, so those who are after something crisp and edgy will want to stick to the W3 or go with another brand.

The presentation of the W4 may just be the most impressive aspect of its sound. The soundstage is similar in size to that of the W3 but the outstanding separation and imaging are closer to those of the UM3X. The resulting sound is not nearly as intimate as that of the UM3X but remains full and coherent despite the greater soundstage size without becoming as ‘falsely’ enveloping as that of the Earsonics SM3. As stated in my review of the SM3, there is definitely a sweet spot for soundstage size in armature IEMs – too large and the earphones will start to sound ‘thinned out’; too small and congestion can become an issue. The W4 puts some natural-sounding distance between the listener and the music but does so without placing much of a ‘veil’ over the sound – an impressive feat. Though the UM3X does not sound notably veiled either, its notes are a bit softer than those of the W4 and its subdued treble results in decreased airiness compared to the new flagship. The tone of the W4, too, is slightly more neutral than that of the UM3X and the timbre is on-par with the SM3 and about as good as it gets for BA-based earphones.

Value (8.5/10) – With the introduction of the W4, Westone has once again raised the stakes in the driver wars between high-end IEM manufacturers – something they’ve done at least twice in the past. The fit, comfort, build quality, and isolation are all what we’ve come to expect from Westone products but it should come as no surprise that the sound of the W4 is an evolutionary, rather than revolutionary, step up from the company’s previous flagships. The sound signature requires almost no qualifications for those familiar with Westone products – well-rounded, refined, and spacious, the W4 is a very difficult earphone do dislike. Clearly it is not for those seeking FAD-like clarity, exciting treble, or explosive bass but the balance and realism of the new Westones is difficult to fault. Easily one of the best universal all-rounders I’ve come across.

Pros: Impressive isolation, build quality, and accessory pack; no cable noise; excellent balance & soundstaging
Cons: Tubby shells may not be ergonomic for some