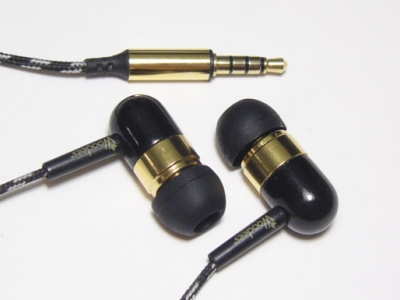 Accessories (3/5) – Single-flange silicone tips (4 sizes), shirt clip, and velour drawstring carrying pouch
Build Quality (3.5/5) – Though the housings of the Blues are still the same size and shape as those of the original Woodees, the cheap-looking orange accents have been replaced with sturdier-looking gold-plated metal bits and the wooden part of the housings has been painted black. The Woodees logo, which rubbed off far too easily on the old model, has been moved to the strain relief and L/R markings have been left out completely. The striped nylon-sheathed cord is one of the better cloth-type cords I’ve come across – soft and flexible but prone to neither kinking nor tangling. The cable is protected by long rubber sleeves and features a sliding cinch and gold-plated Y-split and 3.5mm plug. Mild driver flex is present upon insertion
Isolation (3/5) – Limited by the size of the housings but quite decent for everyday use
Microphonics (4/5) – Very mild when worn cord-down, nonexistent otherwise
Comfort (3.5/5) – The housings of the Blues are rather large and heavier than those of the old model. Those with smaller ears may have trouble getting a good fit but the earphones can be worn comfortably over-the-ear despite the longer strain reliefs

Sound (6.9/10) – The sound signature of the Woodees Blues is on the balanced side of things – a contrast to the bass-heavy sound produced by the majority of most wooden earphones. The bass trails the similarly-priced Thinksound TS02 noticeably when it comes to depth and rumble, which is not to say that the Woodees are anemic in the least. Their bass is still very present and full-bodied – even a bit boomy at times – with plenty of impact and good clarity and articulation. The TS02 simply has an easier time portraying great quantities of bass due to its longer attack and decay times, which make its low end sound softer and fuller than that of the Woodees. On the other hand the bass of Blues is tighter and punchier – enhanced, but never blown out of proportion. Aside from the balance-oriented Meelec CW31, the bass of the Woodees it is the most linear and arguably the most true-to-source among all of the mid-range wooden earphones I’ve heard.

The midrange of the Blues is warm, lush, and sweet. Due to their leaner low end, bass bleed is less significant with the Woodees than with the Thinksound TS02, Xears TD-III, and Skullcandy Holua. The detail and clarity are impressive as well, competing well with the Xears TD-III and Brainwavz earphones. The treble transition is quite smooth, with only a touch of unevenness and very mild sparkle. Treble clarity is not quite as spectacular as midrange clarity, especially next to more treble-heavy earphones such as my Sunrise Xcape, but the Woodees do sound nearly as effortless as the TD-III when it comes to extension and really don’t lack treble quantity by my standards.

The soundstage of the Blues is above-average in size and quite airy. They lack the sheer space and depth of the TD-III but seem to have a cleaner, more well-separated sound due to the greatly diminished bass quantity and leaner presentation. Positioning and instrumental separation are adequate and the Woodees strike a good balance between the more intimate sound of the Skullcandy Holua and the overly-ambient presentation of the Fischer Audio Daleth. On the whole, I find the signature of the Blues to be the ‘safe’ choice among wooden in-ears as they are so unlikely to offend with their balance or voicing. Interestingly, despite being said to share drivers with the new Blues model, the older IESW100B had very noticeable treble harshness to my ears and the new model does not. I can’t be sure whether the difference is attributable to the differences in the design & construction between the two or to variances between individual drivers but the point stands – the grating treble of the IESW100B is not an issue with the IESW100L.

Value (7.5/10) – Though not radically different from the cheaper IESW100B model, the Woodees Blues offer improvements in build quality and aesthetics, as well as a standard mic and 3-button remote. The price increase puts the Blues in direct competition with Thinksound’s TS02+mic model. Indeed, the two earphones perform similarly enough from a functional standpoint but pursue slightly different sound signatures. The Woodees are leaner-sounding and quite balanced next to the bottom-heavy Thinksounds, offering a bit more clarity and airiness to counteract the more impressive bass depth, smooth and lush midrange, and convincing timbre and dynamics of the Thinksounds. The 3-button remote might be a deal-breaker for some but from a sound signature standpoint it will come down to personal preference between the two.