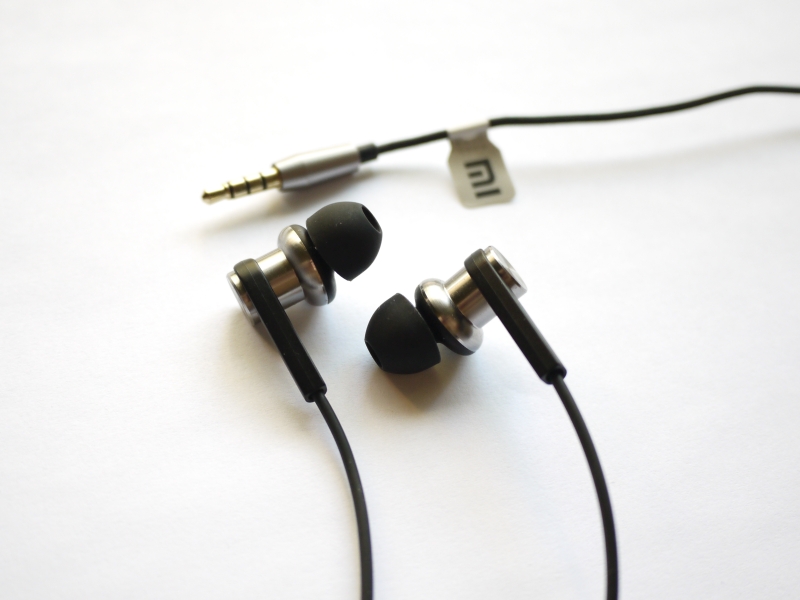 Accessories (1.5/5) – Single-flange silicone tips (4 sizes)
Build Quality (3.5/5) – The Xiaomi Hybrid is similar in design to the preceding Piston 3 model and features a familiar plastic-and-metal construction. Cables are also similar – rubbery above the y-split and sheathed in nylon below it to provide some resistance to tangling. The 3-button Android remote carries over from the Piston 3 but the buttons have been redesigned and are now easier to use without looking
Isolation (2.5/5) – Isolation is average thanks to the shallow fit of the earphones
Microphonics (3/5) – Noticeable, but not too bothersome when music is playing; slightly worse than with the Piston 3
Comfort (4/5) – The angled-nozzle fit of the Hybrid will again be familiar to Piston 3 owners, but the newer model uses larger housings that are not as flush in the ear when worn – likely a necessity to accommodate the additional driver. The off-center strain reliefs are a nice touch and the fit is very good overall, but not as compact and unobtrusive as that of the Piston 3

Sound (8.0/10) – The Xiaomi Hybrid utilizes a dual-driver system with a dynamic driver for the bass and a balanced armature for the mids and highs – pretty much the norm for this type of hybrid setup. What’s much more unusual is the fact that you can buy a hybrid IEM for $25 in the first place – in a way, this puts the Xiaomi Hybrid in a class of its own since comparisons with other hybrid IEMs seem unfair due to the price disparity.

As we know, however, a particular driver type or setup in no way guarantees a specific sound tuning or performance level. We know this because there are top-tier earphones with single dynamic drivers and pricy multi-driver IEMs that offer much poorer audio quality. In the case of the Xiaomi Hybrid, performance is mid-tier and the sound tuning follows a fairly capable “V-shaped” sound signature with both the bass and treble having more emphasis than the midrange.

The 4th-gen Xiaomi IEM boasts very impressive bass slam and impact, especially considering the amount of clarity it retains. The bass is neither the most powerful nor the tightest, even among reasonably-priced in-ears, but is very difficult to fault for the price – strong enough to satisfy all but the most bass-obsessed listeners and provide the earphones with a nice and full-bodied overall sound.

The mids are mildly recessed and somewhat thin-sounding, though better in this regard than the preceding Piston 3 model thanks to the Hybrid’s richer bass and warmer tone. Midrange clarity, however, is not great when compared to the Piston 3 and many other mid- and high-tier earphones. It is not even up to par with the tremendously wallet-friendly Philips SHE3590, which is more balanced but not as impactful or full-bodied as the Xiaomi. In contrast, the Hybrid is more balanced than the severely V-shaped Popclik String, but still only about equal to the String when it comes to clarity.

Next to the relatively lean midrange delivered by its BA driver, the mildly boomy bass of the Hybrid is a bit out of place, creating a slightly disjointed feeling. This lack of coherency was common with early hybrid earphones and was even noticeable with the iconic ($1300) AKG K3003, the first mainstream triple-driver hybrid earphone released back in 2012. As such, it is hardly a complaint when we’re getting a hybrid IEM for under $30, but noteworthy nonetheless.

The treble of the Xiaomi Hybrid is middle of the road for a v-shaped earphone. It is not dark or recessed, nor is it harsh or sibilant, but it’s also not as energetic and crisp-sounding as I would expect from a balanced armature tweeter. As a result, while its highs are smooth for a v-shaped set – significantly more so compared to, say, the Popclik String – it can also sound a little dull and muddy overall compared to higher-end models. The soundstage of the Hybrid is good, however, and noticeably more spacious compared to the aforementioned Philips and Popclik units, as well as most other entry-level IEMs. The presentation is a little laid-back, but capable all around with no major shortcomings – an excellent showing for an entry-level earphone.

Below are several head-to-head comparisons between the Xiaomi Hybrid Earphones and other sets that either compete in a similar price bracket or offer somewhat analogous sound tuning, provided as additional context for the earphones’ performance.

The most noticeable difference in sound between the Piston 3 and the newer Xiaomi Hybrid is that the Hybrid delivers slightly deeper but noticeably boomier bass, and generally sounds more heavy and powerful at the low end. The Piston 3 presents tighter, more resolving bass at the cost of some sub-bass presence and slam – not surprising, as bass depth never was one of its strong suits. As a result of its tighter bass, the Piston 3 sounds significantly cleaner than the Hybrid on bass-heavy tracks. When there’s not much bass present, however, the Hybrid appears less mid-recessed and delivers impressive clarity and detailing. Overall, the Piston 3 is slightly more v-shaped and a little less full-bodied, and tends towards a brighter tone thanks to its lower bass quantity.

On a functional note, the Hybrid model tends to be a little more microphonic than the previous Pistons, but is also a little more efficient, reaching higher volumes quite easily with any device.

As Xiaomi’s venerable IEM line continues to evolve, I once again find myself wishing that the older variants weren’t phased out with every update. I realize that Xiaomi is trying to keep their accessory lineup straightforward, but the Hybrid and Piston 3 are certainly different enough to coexist in the budget audiophile IEM space – the Hybrid as a more bass-heavy and consumer-friendly option and the Piston 3 as the more hi-res and refined choice for critical listeners.

The most budget-friendly of the current-gen VSonic models, the VSD1S nonetheless faithfully follows the VSonic house sound with a crisp, clear, and punchy, slightly v-shaped sound. Compared to the Piston Hybrid, the VSD1S sounds more balanced, with mids that are more prominent and less veiled. The VSonic unit is significantly clearer and more detailed in the midrange while the Hybrid is somewhat veiled in comparison. It is warmer and smoother than the VSonic, but the clarity tradeoff is difficult to swallow nonetheless.

The bass of the VSD1S is tighter and has more immediate punch, whereas the bass of the Hybrid is more powerful and can be intrusive at times. The treble of the VSD1S is also a little crisper. Both earphones have above-average soundstage width but the VSD1S is a little more convincing thanks to its brighter, airier sound. With my affinity for flatter sound signatures, I found the VSD1S preferable, largely for its mids, but I wouldn’t recommend it over the Xiaomi Hybrid for those who value enhanced bass or are sensitive to treble harshness/sibilance.

Philips’ TX2 model is in the same ballpark as the Xiaomi Hybrid not only in price, but also in form factor – it is a shallow-fit, earbud-style IEM, albeit one with a much more plasticky construction. The sound is an even greater contrast despite these earphones both offering a v-shaped tuning.

The TX2 and Xiaomi Hybrid offer two very different takes on a v-shaped sound signature. The TX2 is bright, clear, and thin-sounding. It is much more aggressive when it comes to detailing and suffers from more “splashy” treble, resulting in occasional harshness. It has tighter bass, albeit a lot less of it, and a larger, more spacious soundstage

The Xiaomi Hybrid is warmer, bassier, and more full-bodied by a sizeable margin. It is smoother and less fatiguing, too. However, its bass can be pretty messy in comparison to the more linear and controlled low end of the TX2, and its midrange gets quite muffled in comparison. Overall, the TX2 is a clear winner when it comes to clarity and soundstaging, while the Hybrid is significantly smoother, warmer, and bassier.

These earphones, released last year by two previously-related Chinese companies, have both broken pricing conventions in their respective markets – the Xiaomi Hybrid with the first (mainstream) sub-$30 dual-driver hybrid and the 1MORE with the first triple-driver hybrid under $100. The two earphones have further similarities in fit, functionality, and even color scheme. However, the pricier 1MORE unit boasts a more elegant design and significantly more refined sound.

In terms of sound tuning and tonality, the 1MORE Triple falls right in the sweet spot between the warmer, bassier Xiaomi Hybrid and the brighter, thinner Philips TX2, but with better performance than both. Compared to the Xiaomi Hybrid, its tuning is more balanced, accurate, and neutral, with a “shallower” v-shape to its frequency response. It is much more refined and natural as a result, and boasts better clarity and resolution for a significantly more Hi-Fi audio experience.

The Xiaomi, on the other hand, is bassier, warmer, and darker. While its low end offers a little more impact, bass control (quality) lags way behind the 1MORE unit. The Xiaomi Hybrid’s bass lacks detail and can be intrusive, its sound signature is more v-shaped, and its midrange is less prominent and clear. Vocals are less intelligible, and while it can be a hair smoother overall, I wouldn’t say it has any real advantages over the 1MORE except for its price and its appeal to those who prefer a warmer, bassier sound to more neutral tuning.

Value (9/10) – In-ears have been improving steadily in performance at every price level, with Xiaomi’s own venerable Piston line leading the charge in recent years. Being the first budget IEM to offer a hybrid dual-driver setup automatically nets the 4th-gen Xiaomi several nods when it comes to value. However, while each of Xiaomi’s previous Piston revisions brought a sizable leap forward in either sound quality or ergonomics, this 4th-gen model does neither. Don’t get me wrong – for the price, the sound quality of the Xiaomi Hybrid is excellent, the design is solid, and the 3-button Android remote is very welcome – it’s just not head and shoulders above the competition as the previous Xiaomi IEMs often were.