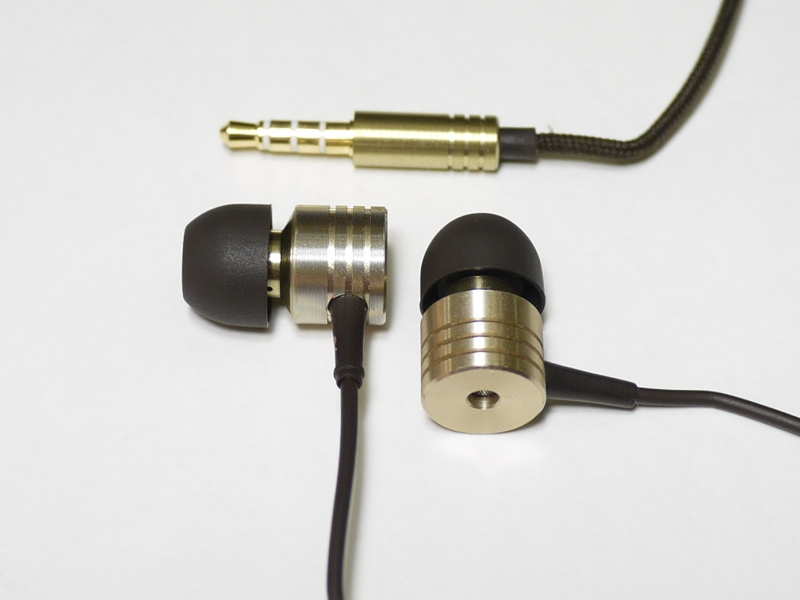 Details: 2nd generation of China-based Xioami’s popular Piston earphones, called the 2.0 or 2.1 depending on included accessories

MSRP: approx. $16 (manufacturer’s page)
Current Price: $25 from Amazon.com; Canada: $33 CDN from Amazon.ca (note: due to abundance of fakes, exercise caution when purchasing the Piston on eBay and Amazon. There are legitimate eBay sellers, such as bigbargainsonline, but if a deal seems too good to be true it probably is. Check the seller’s feedback before placing an order – it’s always better to buy from a seller known for selling genuine Xiaomi units, even if it costs a few bucks more)
Specs: Driver: Dynamic | Imp: <=16Ω | Sens: 93 dB | Freq: 20-20k Hz | Cable: 3.9′ I-plug with mic & 3-button Android remote (still has limited functionality with other devices)
Nozzle Size: 5mm | Preferred tips: MEElec M6 single-flanges, Generic single-flanges
Wear Style: Straight down or over-the-ear (preferred)

Accessories (3/5) – Single-flange silicone tips (3 sizes); plastic box doubles as storage case with integrated cable wrap (Note: newer 2.1/IF version comes with updated eartips and adds a shirt clip)
Build Quality (3.5/5) – The finely-ridged aluminum housings of the Piston 2 are a magnet for grime but the build is solid, with ample strain relief all around. There are many design improvements compared to the original Piston – the L/R markings are easier to see, there is virtually no driver flex, and the cable is no longer cloth-sheathed above the y-split, which makes the Piston 2 less tangle-prone and reduces cable noise
Isolation (2.5/5) – Average, about the same as with the original Piston despite the addition of a large rear vent on the Piston 2
Microphonics (3.5/5) – Bothersome when worn cable-down but much better compared to the original Piston; good with over-the-ear wear
Comfort (3/5) – The housings of the Piston are rather wide and remind me of the LG Quadbeat. They have squared-off edges at the front, which may create pressure points for those with small outer ears. The Piston can be worn both cable-down and cable-up, for which the positioning of the microphone/remote at the Y-split is perfect

Sound (8.1/10) – The Xiaomi Piston 2 makes all the right steps forward compared to the first-generation Piston, tightening up the bass response and clearing up the mids. The low end of the Piston 2 is slightly boomy, but without comparing it to a tighter-sounding earphone – which generally means one that is either much more expensive or much lighter in the bass department – it’s really not that noticeable.

The Piston 2 features enhanced bass, delivering both good extension and strong mid-bass presence. It is similar to the Sony MH1C and the pricier RHA MA750 in overall bass quantity, though both of those place a bit less weight on mid-bass. The extra mid-bass emphasis of the Piston 2 – which still pales in comparison to that of the original Piston – gives it a very visceral punch. When comparing the Piston 2 to higher-end earphones, it can be hard to get over the difference in bass control, but against similarly-priced sets it continuously impresses.

The bass of the Piston 2 grants it a warm tone and full-bodied sound. Overall, while the Piston 2 is a v-shaped earphone, the fullness prevents its midrange from sounding overly recessed. Clarity is good considering the bass quantity – even earphones with significantly more forward mids, such as the Fidue A63 and T-Peos D200R, don’t have a clarity advantage over the Piston 2. The only ones that do are brighter, thinner (and also harsher)-sounding sets with more recessed lower mids, for example the Philips TX2, MOE-SS01, and T-Peos Rich200.

The Piston 2 is not your typical v-shaped earphone in one other way – its upper midrange and treble are surprisingly smooth and refined. The top end has some sparkle, but is still sufficiently forgiving. Maybe not as much as the Sony MH1C, Fidue A63, and HiFiMan RE-400, which all have more laid-back treble, but more than a $25 earphone should be. Tonally, the Piston 2 can’t even be called “bright”, though it does have a little more treble energy than the Sony MH1C. Ditto on the T-Peos D200R – the Piston 2 has more of both sparkle and upper treble presence, which gives it an airier sound.

Thanks to its ample treble presence and generally good clarity, the Piston 2 has a wide and open presentation. It is similar in soundstage size to the brighter-sounding MOE-SS01 and superior to sets such as the SteelSeries Flux and T-Peos D200R. At the same time, the presentation has good depth and is capable of sounding quite forward when necessary. The Sony MH1C, for example, has a pretty good soundstage but sounds consistently laid-back compared to the Piston 2.

Xiaomi responded to the popularity of the original Piston earphones with a number of improvements. In addition to fixing many of the design issues, the sound was re-tuned and a much larger port was opened up on the back of the Piston 2 in place of the small bottom-facing vent on the old Piston.

The result of the new tuning is significantly less bloated bass – the Piston 2 makes its predecessor sound boomy, and while it is not in any way bass-light, it won’t tickle bassheads’ fancy the way the original might have. Thanks to the tighter bass of the Piston 2, its midrange is nowhere near as muffled and the treble is a little more prominent, though also a touch less forgiving. The presentation is more open, too, although the original Piston already did an excellent job in that regard. All in all, with the exception of having less bass quantity, the Piston 2 is a clear step forward from the outgoing model.

In the world of portable Hi-Fi, the VSD1S from VSonic is a budget earphone, but it still costs twice as much as the Piston. It’s also an extremely solid set for the price, so the fact that the Piston 2 can go toe-to-toe in sound quality is a paradigm shift of sorts.

The Piston 2 is bassier and warmer than the VSD1S, thanks in large part to its greater deep bass presence. The two are pretty evenly-matched in mid-bass impact, but the VSD1S can appear punchier at times thanks to the more recessed mids. The bass quality of the Xiaomi lags behind the VSonic unit a bit – while more extended, the low end of the Piston 2 is a little bloated and can appear somewhat intrusive next to the VSD1S.

The midrange of the VSD1S is a little thinner and more recessed compared to the warmer mids of the Piston 2. It is also clearer, however, and does a better job of staying free of bass bleed, especially on complex tracks. Moving up, the VSD1S is more peaky, which makes it brighter and a touch more sibilance-prone. The Piston is smoother and more forgiving, though not by a large margin. In terms of presentation, both sound nice and airy but the VSD1, like VSonic’s higher-end models, tends towards a wider, less intimate soundstage.

Looking for a higher-end earphone to compare to the Piston 2, I came across the RBH EP1, which provides a rather different variant of warm, bassy sound. The EP1 impressed me originally with the prominence and clarity of its midrange, and that certainly hasn’t changed. Compared to the Xiaomi unit, its midrange is much more forward and quite a bit clearer. Its bass is also much more controlled in comparison.

The Piston is bassier than the EP1, but also more bloated and boomy. This makes its midrange – which is already less forward than that of the EP1 – sound veiled. The tone of the Piston is warmer and its sound is more full-bodied, making the EP1 sound thin in comparison. The EP1 also has more presence in the upper midrange and lower treble, but not in a good way – it still isn’t particularly well-balanced, and sounds rather more harsh than the Xiaomi to boot. Impressively, the Piston’s soundstage is as big as that of the EP1, though on tracks with lots of bass it tends to become congested more quickly.

Just for fun, I pitted the Piston 2 against an earphone approximately 12 times more expensive, a flagship in-ear monitor with a hybrid driver setup that utilizes a dynamic driver for bass and two balanced armatures for the midrange and treble. This comparison is highly unfair, but also interesting because it is the only one I  made where the Piston was clearly outclassed – an extremely impressive showing for the $25 Xiaomi.

Next to the DN-2000, with its 3-way crossover and independent subwoofer, the bass of the Pistons sounds boomy and has way too much mid-bass bloat. The DN-2000 has a focus on sub-bass rather than mid-bass and sounds much tighter and more controlled. It is also much clearer – the bass bleed of the Xiaomi makes its mids sound overly thick and muffled. This, in turn, causes it to gloss over a good bit of detail in comparison to the faultlessly resolving DN-2000.

The Piston has a more full-bodied sound, but lacks crispness. Especially in the treble, it seems like parts of the spectrum are so timidly reproduced that they are almost missing. The DN-2000, while much less forgiving, makes for a better reference earphone by far. The soundstage of the Piston seems congested while the DN-2000 has a wider, more open, more out-of-the-head sound.  Tonality, however, is one area where I can see some listeners preferring the warmer Piston 2 to the brighter DN-2000.

Value (10/10) – Making sizable performance gains over its predecessor, the Xiaomi Piston 2 offers a solid construction, 3-button Android remote, and sound that’s all but flawless for the price and purpose. While higher-end in-ears can point out where the audio quality of the Piston 2 falls slightly short, in the age of internet radio this really may be all the fidelity many users need. With the dearth of choices among full-featured Android headsets at this time, the Xiaomi Piston 2 is a bargain, and a must-have for any Android user.