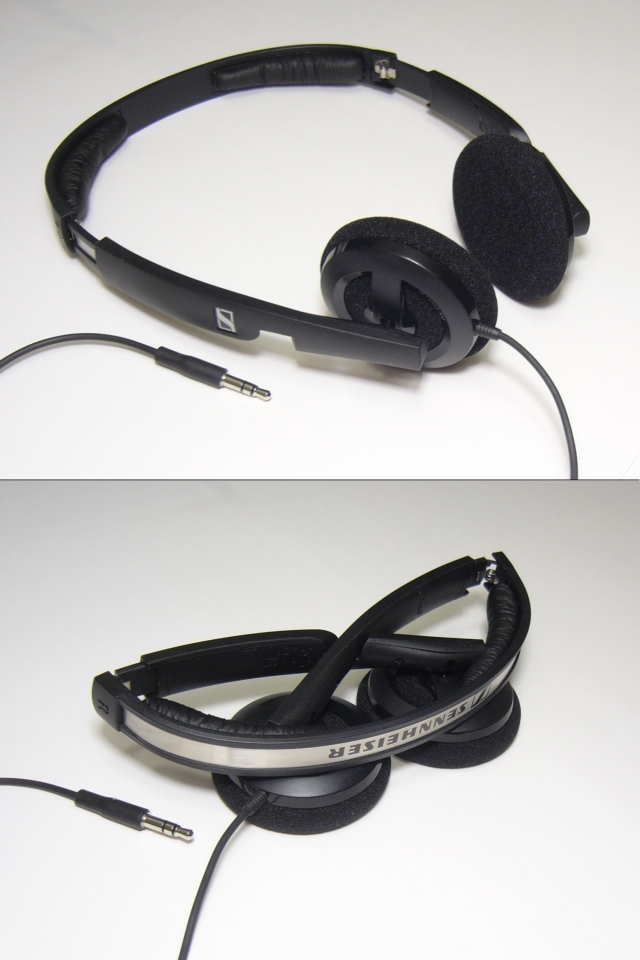 Second revision of Sennheiser’s iconic ultraportable headphoneMSRP: $69.95 (manufacturer’s page)
Current Price: $70 from amazon.comBuild Quality (7.5/10): The design and functionality of the PX100-II borrows heavily from the older PX100 but undergoes improvement in several key areas. First and foremost are the plastics, which are now thicker and beefier all around. The metal headband, too has, been widened and strengthened compared to the first-gen PX100. The foam pads are a carryover from the older headphone but the mk II model brings with it a slightly thicker and significantly more convenient single-sided cord. A soft carrying pouch is included with the PX100-II in place of the hard plastic case that came with the PX100.Comfort (9.5/10): The beefier PX100-II is slightly heavier than the featherweight PX100 and the clamping force is a touch greater. Still, the cups have good freedom of motion and apply pressure evenly on the ear. The headband padding is minimal but still easily gets the job done – all these years later the PX design still passes the comfort test with flying colors.Isolation (3/10): The open design lets plenty of outside noise in and leaks some sound out.Sound (6.75/10): While the second revision of the closed-back PX200 model makes huge performance leaps over its predecessor, the PX100-II stays conservatively close to the sound signature of the PX100. In a way, the decision is understandable – for a budget-level open portable, the PX100 was almost universally praised and Sennheiser had much to lose by straying off the beaten path. It should come as no surprise, then, that the PX100-II is a midbass-heavy headphone with all of the warmth and darkness usually associated with the PX100. The mid-bass emphasis of the PX100-II seems to be a hair greater than that of the PX100 but other than that the bass is very similar – smooth, thick, powerful. Bass control is quite good next to my aging KSC75 but of course not as impressive as that of the flatter and leaner-sounding PX200-II.The mids of the PX100-II are similar to those of the PX100 – thick and smooth but still detailed and articulate. Next to the bass, the midrange and treble are both slightly recessed – the more aggressive Meelec HT-21 really makes the PX100-II sound a bit veiled and smoothed-over. Still, midrange detail and clarity are nothing to complain about for a headphone as smooth as the PX100-II. If anything, the PX100-II seems to take an extra bit of emphasis off its lower treble to appear even more inoffensive for prolonged listening than my old PX100 – quite unnecessary in my opinion, but then I can tolerate the far-brighter HT-21 just fine. The treble itself is a bit laid-back and fairly well-extended. It’s not as clean and crisp as that of the similarly-priced ATH-SQ5 but still quite impressive for a bass-heavy ultraportable.The presentation of the PX100 is again similar to the PX100-II – typical Sennheiser in placing the listener at a distance from the action but otherwise very decent for an entry-level portable headphone. Positioning is not spectacular and the slight thickness makes the bass a bit omnipresent but the soundstage is broad and manages to have convincing depth. The open nature of the PX100-II also prevents the reverb and cupped-in feel of many entry-level closed portables, not that the current prices justify calling the PX100-II ‘entry-level’. Drivability is good as well – I don’t think the PX100-II is quite as efficient as the current-gen PX200 but it handily beats the new PX90 as well as the slightly more expensive Ultrasone HFI-15G. Portable players have no trouble driving it to volumes above my tolerance limit, though amping does have an effect very similar to the old PX100, tightening the bass and improving the transient response of the drivers.Value (7.5/10) From the very first listen, it is clear that Sennheiser didn’t risk messing with the established PX-series formula when updating the PX100 – while slightly sturdier in build, the headphones are otherwise remarkably similar to the original sub-$50 heavyweight. Far more so than the PX200-II, the sound of the PX100-II follows very closely in the steps of its predecessor, which brings us to the PX100-II’s main problem – the price. The price point of the PX100-II is nearly double what the PX100 was selling at for the last few years of its existence, which puts it in the more competitive $50-100 market segment. More than that, the new price gives a pretty significant value-for-money advantage to the PX100’s arch-rival, the Koss PortaPro. Is the PX100-II worth the $60 it’s selling at now? If portability is a factor – yes. However, it just isn’t the bang-per-buck champion it once was when the price is nudging the Beyerdynamic DT235 and Ultrasone HFI-450 and being undercut significantly by the PortaPro, Meelec’s HT-21, and Sennheiser’s own PX90.Manufacturer Specs:Frequency Response: 15-27,000 HzImpedance: 32 ΩSensitivity: 114 dB SPL/1mWCord: 3.9ft (1.2m), single-sided; Straight PlugSpace-Saving Mechanism: Flat-folding, collapsible