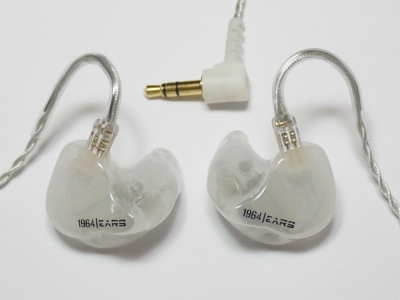 Accessories (5/5) – Shirt clip, ¼” adapter, cleaning tool, carrying pouch, and crushproof Pelican storage case
Build Quality (5/5) – The 1964-V3 utilizes a brand new 3-way setup in a familiar dual-bore configuration. Molding quality is greatly improved compared to my old 1964-T, with no bubbles, very clear faceplates, and better finish around the cable sockets and nozzles. Like the 1964-T before it, the V3 uses a cable with a standard Westone socket, albeit with a shorter memory wire section and a different plug and y-split. Options include recessed cable sockets, custom artwork, custom colors, and various exotic faceplates
Isolation (4/5) – The isolation provided by the fitted acrylic shells is excellent -slightly below that of Etymotic Research earphones but higher than with stage monitors from the likes of Westone and EarSonics
Microphonics (5/5) – Pretty much nonexistent as with all of my custom monitors
Comfort (5/5) –The acrylic shells are hard but not in the least uncomfortable when fitted correctly. As with all customs, putting them in will require a bit of getting used to for first-time users but the twisting motion eventually becomes second nature. If the earphones remain uncomfortable after an initial break-in period, a refit under the 30-day fit guarantee is probably a good idea. There is added cost with shipping the monitors back and, if necessary, getting new impressions but on the whole a perfect fit is well worth the trouble

Sound (9.4/10) – The 1964-V3 is the second-generation triple-driver custom from 1964EARS. The original 1964-T will always have a special place in my heart as my very first custom monitor, but there is no denying that it had room for improvement. With an additional crossover point for a true 3-way configuration, the V3 is superior to the old model in both tuning and ability.

The bass of the V3 is delivered by one of the twin Knowles CI armatures and bests the lows of the old 1964-T in both quantity and quality. The V3 takes on an enhanced-bass profile with warm overall tonality. The bass impresses in both extension and impact, with better depth, more punch, and a more natural note presentation compared to the old 1964-T. The V3 also sounds more effortless and dynamic overall, and despite the above-average note thickness remains quick and clean. Bass bleed is minimized by the prominent midrange, though the V3 still appears a touch boomy next to leaner earphones such as the Alclair Reference.

The midrange of the V3 is smooth and forward, with good note thickness and a pleasant warmth. It sounds lush and fluid, in stark contrast to the somewhat dry 1964-T. Clarity is improved as well, with the mids sounding more transparent and making the 1964-T appear a touch muffled in comparison. Detail levels are still not quite as impressive as with some of my higher-end monitors but definitely not lacking. The treble energy of the V3 is not too great, allowing it to remain a warm-sounding earphone. However, it is brighter and has better top-end extension compared to the old 1964-T. Predictably, the V3 is slightly more sibilance-prone than the smoother, more laid-back 1964-T, but also more lively and energetic.

The presentation of the V3 is solid as well – the V3 is better at portraying intimacy than 1964’s previous triple-driver and has better soundstage depth in addition to very decent width. The result is better layering and a slightly more spacious overall sound compared to the previous model – not quite to the level of the AKG K3003 or Alclair Reference, but not too far off. It’s worth also noting that the V3 is a very sensitive earphone and tends to hiss with some of my poorer sources. Even the generally quiet Fiio E7 isn’t quite dead-silent with the V3.

The CTM-200 is a dual-driver custom monitor from Florida-based Clear Tune Monitors. Designed for stage performance, the CTM-200 boasts a leaner, flatter sound signature that is more accurate than it is musical. The 1964-V3 offers up more of both sub-bass and mid-bass, providing added power and punch. It is also a bit more forward in the midrange and provides a livelier, more dynamic sound. The CTM-200 is more accurate and sounds a bit cleaner as a result of its lower bass quantity. Its tone is quite neutral compared to the warmer 1964-V3 and its treble is smoother, reducing harshness and listening fatigue. However, detail resolution lags behind the 1964-V3 a little. Soundstage size is similar between the two earphones with the exception of depth, which is won by the V3. In general, the CTM-200 sounds a bit more laid-back and may be boring for the casual listeners, whereas the more colored signature of the V3 may be ‘just right’. The opposite is true for someone chasing a flat, accurate sound.

The Alclair Reference is a 2-way, triple-driver earphone with impressive technical ability. Originally priced at $499, the Reference has recently dropped in price, putting it in direct competition with the 1964-V3. Compared to the new 1964EARS, the Reference sounds more laid-back and spacious. Its bass has similarly good depth but less mid-bass emphasis for a cleaner sound and cooler tone. Both earphones have impressive bass punch and power. Detail resolution is slightly better with the flatter-sounding Reference while the V3 is smoother and would probably be considered more “musical” by most. Its sound is more intimate and its note presentation – thicker and more “fluid”. The treble of the V3 is also a bit more forgiving of sibilance compared to the Reference.

UE’s quad-driver flagship is a top-tier universal with a sound signature that does a good job of treading the line between accurate and “fun”. Compared to the 1964-V3, the UE 900 offers a flatter bass profile with better balance between mid-bass and sub-bass, less upper midrange emphasis, and a smoother top end more forgiving of harshness and sibilance. The V3 is warmer in tone but also offers brighter, livelier treble. Its sound is more dynamic, albeit a touch more fatiguing compared to the smooth UE 900. Its midrange is clearer and slightly more detailed, with guitars and vocals sounding raw and transparent, in sharp contrast to the somewhat veiled upper mids of the UE 900. The V3 also sounds more intimate but still provides a more 3-dimensional presentation with better depth and a stronger center image.

Phonak’s dual-driver flagship easily competes with some of the very best universals but is somewhat less impressive when compared to the cheaper 1964-V3. In terms of sound signature, the PFE 232 is far more similar to the Alclair Reference, pursuing a slightly v-shaped sound with prominent treble, and deep, punchy bass. The tone of the 1964-V3 is warmer and the earphone places more emphasis on the mid-bass region. Compared to the V3, the PFE 232 sounds more distant and has a thinner note presentation as well as less mid-bass emphasis. The midrange of the PFE 232 is not as clear and intelligible as that of the V3. With the V3, the mids are much more forward but also more transparent. There is also a large difference in efficiency – the V3 is very sensitive for an in-earphone while the sensitivity of the PFE 232 is definitely on the low side.

Unique Melody’s flagship utilizes a 3-way 6-driver design, beating out the V3 in technical ability, but at a much higher price. The sound signature of a Miracle is a more neutral one, with a flatter frequency profile for a more balanced sound. The Miracle has better detail resolution and a more spacious—but still very enveloping—presentation. The Miracle focuses on deep bass, with less mid-bass boost compared to the V3 resulting in less impactful but tighter, cleaner, and more resolving bass. The V3 sounds less textured and a touch boomy in comparison, though it avoids mid-range bleed by pushing the mids forward. The treble of the Miracle is both more forgiving and more extended, with a sharp gain in refinement over the cheaper 1964s.

Value (9/10) – Priced close to its predecessor but boasting a revised driver configuration and improved tuning, the 1964 EARS 1964-V3 is an easy recommendation among entry-level custom earphones. Compared to similarly-priced universals, the V3 not only sounds fantastically good, but also offers the usual perks of going custom, including isolation, fit, and personalization options. The V3 also boasts better molding quality than my old 1964-T, competing with CTM and Unique Melody for the nicest shells I’ve seen so far. Sound-wise, the earphone still boasts full, forward mids but no longer sounds as mid-centric, offering deeper, more powerful bass and more energetic treble. The sound signature of the V3 is a warm and musical one – perhaps not ideal for monitoring purposes but very, very enjoyable in day to day listening.

Pros: Great molding quality; comfort and isolation of a custom monitor; warm sound with prominent mids, powerful bass, and a well-layered presentation
Cons: Colored sound may not be great for actual monitoring