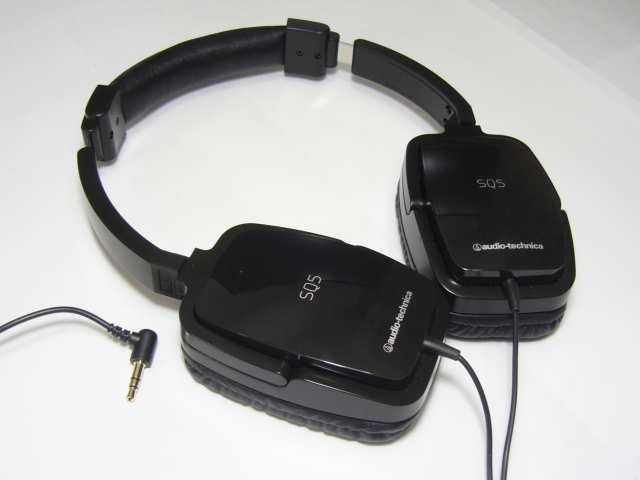 Build Quality (6.5/10): The plastic-fantastic construction of the ATH-SQ5 is far less interesting than the straight-edge aesthetics of the headphones but gets the job done. For the most part the SQ5 is quite similar in construction to the cheaper ATH-FC700, with a plastic frame built around the thin metal headband. On the upside, the SQ5 is extremely light and does nothing more than simply fold flat for storage, meaning that less is likely to go wrong. The modular cord, identical to the one found on the ATH-FC700, seems sturdy and well-relieved.

Comfort (9/10): The SQ5 is a compact supraaural headphone and does tend to bottom out on my ears and cause a build-up of pressure over time even though the soft vinyl pads are reminiscent of the other mid-range Audio-Technica headphones and the headband is well-padded (in contrast to the FC700). Still, weighing in at less than 6oz (170g) and boasting a fairly light clamp, the SQ5 is a headphone I can wear comfortably hour after hour.

Isolation (7/10): As a small, closed circumaural headphone, the SQ5 isolates better than the ATH-ES7 and ATH-FC700 but the cups really aren’t deep enough for it to match the isolation of larger sets such as the Sony MDR-ZX700 or Ultrasone HFI-450.

Sound (7/10): Though the SQ series has been around for some time, it is the higher-end models of the ES series that have garnered all of the praise around Head-Fi when it comes to sound quality. Oddly, I feel that it is the SQ5 that possesses a more neutral and accurate sound whereas the ES7 and ESW9 are more on the fun-and-colored side. The bass of the SQ5 is tight and very controlled and the sound produced is quick, accurate, and highly resolved. The amount of punch is similar to the Meelec HT-21 but the HT-21 has a bit more boom and body. There’s a small amount of roll-off, too, so die-hard bass lovers won’t be pleased. In addition, the SQ5 begins to distort much quicker than most of the similarly-priced DJ sets if the bass is adjusted via EQ. Extremely high volumes can make the SQ5 distort slightly as well (though it could be argued that this is a safety feature). Personally, I like the SQ5’s low end just fine – it stays out of the way until prodded and, when necessary, delivers quick, tight impact without a hint of bloat. However, I can see the lack of mid/upper bass body bothering some listeners.

The midrange of the SQ5 is neither overshadowed by nor dominant over the low end. In contrast to the cheaper ATH-FC700, the SQ5 derives very little warmth from its bass and sounds neither veiled nor overly intimate. The mids of the SQ5 are crisp and clear, with more detail and texture than is afforded by the budget-oriented Meelec HT-21 and increasing emphasis towards the top of the midrange. Like the HT-21, the SQ5 is on the lean side in terms of note thickness and won’t please those looking for the kind of thick, lush sound delivered by the likes of the Maxell DHP-II. At the same time, the SQ5 is not as forward or aggressive in the midrange as the HT-21 and won’t immediately offend those who prefer a more laid-back sound. It is the treble, however, where the SQ5 scores the most points with me – it is clear and extremely crisp, with ample sparkle and very good definition. The SQ5 is not one for the treble-sensitive but it doesn’t offend with harshness or sibilance, either – the peaks and valleys are relatively mild and manage to avoid the dangerous bits of treble response. The treble emphasis actually reminds me of the ATH-EM7GM as well as Audio-Technica’s higher-end in-ears. Detailing is slightly better than with the Meelec HT-21 and the SQ5 extends a bit more effortlessly to the limits of my hearing.

The presentation of the ATH-SQ5 is airy and fairly broad. Soundstage width is average but the slightly thin sound makes them sound more spacious than they really are. For the most part, elements are positioned where they should be but the SQ5 doesn’t have the layering of the AKG Q460 or the separation of the Sennheiser PX200-II. Part of the problem might be the average dynamic range of the headphones – the dynamics really tend to be constrained to the milder side of things regardless of the track. Tonally, the SQ5 is very slightly darker than the HT-21 and slightly brighter than the Sennheiser PX90. This makes it one of the more neutral-sounding sets in my collection, which is not to say that it is boring in the least – the overall balance makes for a very energetic sound – in the in-ear world, its equivalent would be something along the lines of the Maximo iM-590, which has always been one of my favorite sets in its price bracket. Of course my personal preferences do lean towards the analytical but I can honestly say that I’ve enjoyed the SQ5 more than any other sub-$100 headphone I’ve heard in the past month.

Value (8/10): Audio-Technica’s midrange SQ5 portable may not be as striking to behold as the mirror-polished ATH-ES7 but gains points back easily when it comes to comfort and isolation. Clear, airy, and sparkly, the sound of the SQ5 also holds a definite appeal to the analytical listener in me. With bass that is somewhat low on impact and body but still quite quick and accurate, the SQ5 isn’t a Monster Beats competitor but rather an alternative to the more accurate Sennheiser PX200-II and Beyer DT235. As with most Audio-Technica models, the SQ5 comes in a variety of color combinations and may just be the perfect portable for those who can enjoy the balanced sound signature and appreciate the straight lines and sharp edges of the headphone.