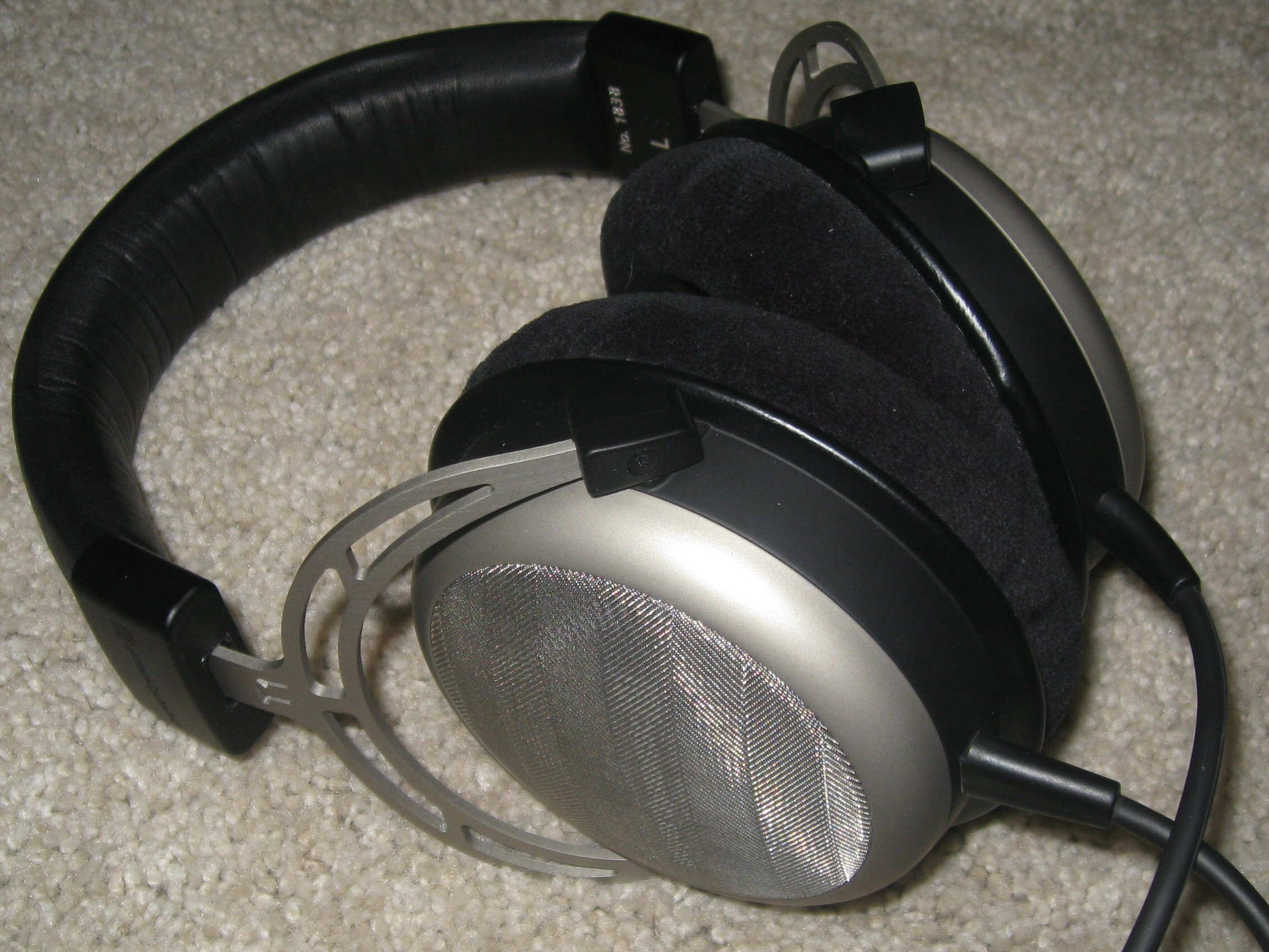 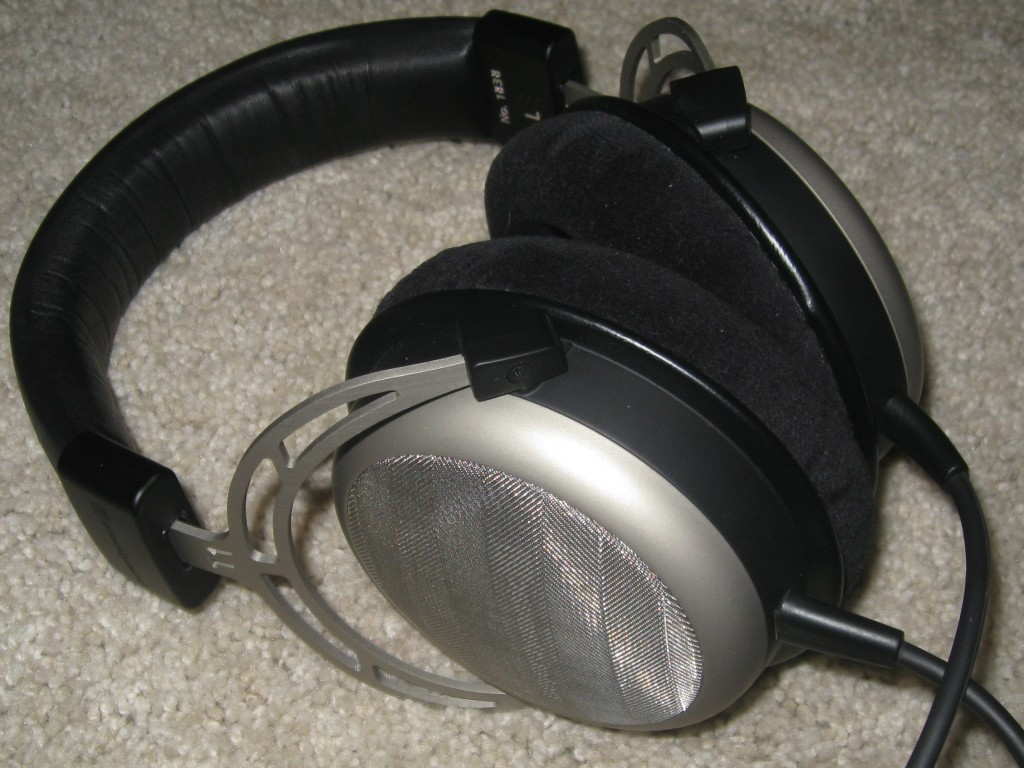 The Beyerdynamic Tesla T1 is a well constructed, good looking open circumaural headphone. It is comfortable for extended periods of time, but the pads did tend to get my ears hot quickly.  Driving the Tesla T1 was the biggest challenge, as the T1 is voltage hungry and needs an amp capable of delivering to sound dynamic.

COMPARISONS
Audeze LCD-2 v1: Both are very nice; well constructed, comfortable, great looking, and great sounding across the spectrum.  Both also have very different styling (wood vs. metal), technologies, impedance, and sound.  The Tesla T1 is brighter and has more of a V shape presentation when compared with the LCD-2, which is more similar to a monitor presentation, but not quite.

These have different sound signatures and distinctly different feel to the sound.  The LCD-2 is thicker and warmer whereas the T1 is brighter and leaner.   But even though the T1 is brighter, it doesn’t seem as clear as the LCD-2 on most tracks.  And I would say the T1 is more forgiving of poor mastering while the LCD-2 allows you to hear everything in the song, good or bad.  The presentation of the LCD-2 changes more from album to album than the T1, which has a more steady presentation.  To me, the LCD-2 sounds more natural.  For example, Blue Rodeo – 5 Days In May the cymbals of the T1 seem to be brought to the forefront and too much of the focus while the LCD-2 has a better balance.  The natural sound of the LCD-2 also seems to come through with electronics genes such as trance and D&B.  The bass of the LCD-2 seems deeper and can hit with more authority.  For example, Chamillionaire – Industry Groupie is just lacking that impact with the T1 that the LCD-2 delivers.  The T1 does well with the bass at the beginning of Massive Attack – Unfinished Sympathy, but the LCD-2 has more power and hit.  Not to take anything away from the bass of the T1, but the LCD-2 is more to my liking.

Christina Aguilera – F.U.S.S. has better air and space on the T1, but when compared with the LCD-2 the treble emphasis seemed like a little too much for my preference.  On Dead Kennedys – California Uber Alles , the LCD-2 has better texturing of the drums at the beginning of the song.  The T1 sounds better with EBTG – Two Star as the instruments details are much easier to make out, but the mastering isn’t the greatest and that comes through on theLCD-2.   My recording of Beethoven – Symphony No. 9 sounded far superior with the T1 than the LCD-2 as the LCD-2 sounded more constricted with a smaller stage.  I attribute this to the mastering because other songs such as NIN – The Four of Us Are Dying have about the same size soundstage.  But listening to more classical, I do prefer the T1 for many of my tracks.

Summary: Tesla T1 has a set soundstage that is larger than that of the LCD-2 and has the bright sound signature I find in many high end headphones/IEMs along with powerful bass.  The LCD-2 on the other hand does not have a set soundstage which can be good or bad depending on the track.  The LCD-2 sound signature seems more balanced and natural to my ears sound closer to the real thing to me.

EarSonics EM3 Pro: Just as the Tesla T1 is different than the LCD-2, the T1 is different than the EM3 Pro.  But while the T1 and LCD-2 can stand look eye-to-eye, the EM3 Pro looks more at the nose of the Tesla T1.  The space the T1 portrays along with better clarity and more realistic and textured bass give a presentation that is usually more involving.  The EM3 Pro is thicker and warmer with a mid focused presentation that changes more with each track, sounding very natural.  The T1 treble can sound like there is too much and therefore artificially enhanced.  Detail levels seem fairly similar, but the expanded space of the T1 results in a more open presentation and better instrument separation.  The warmth of the EM3 Pro has it’s plusses and minuses when A/Bing with the T1, as the EM3 Pro can sound fuller, more powerful, richer, and more natural, but other times it can seem a little too thick and a little dark.  The treble is very different as well, and going from one to the other requires a little adjustment time.  When swapping back and forth quickly made me not really care for either as the T1 seems too bright and the EM3 Pro seeming to have too dark.

So, with less direct, quick A/B comparing, I had more fun comparing these two different beasts.  If I had to choose one, I would probably choose the Tesla T1, but since it is only driven properly by my RPX-33 (and Stepdance at moderate and below volumes), the EM3 Pro does have a place.  So, other than the space, technically, these are on a level playing field, but it is comparing apples and oranges in sound signature and functionality.

The T1 really doesn’t shine without an amp capable of driving high impedance headphones, although the Stepdance can drive it better than most portable amps at lower volumes with wall power.  The T1 is a bright headphone and has a treble emphasis and spacious sound that doesn’t have quite the depth of sound or intimate sound of something like the LCD-2.

Recommended for: Those that have an amp that will drive a 600 ohm headphone and want an extremely good sounding headphone that does everything exceptionally well and enjoy a brighter sound signature.  The Tesla T1 really isn’t lacking anything when driven properly, but you will be confined to your desktop amp.