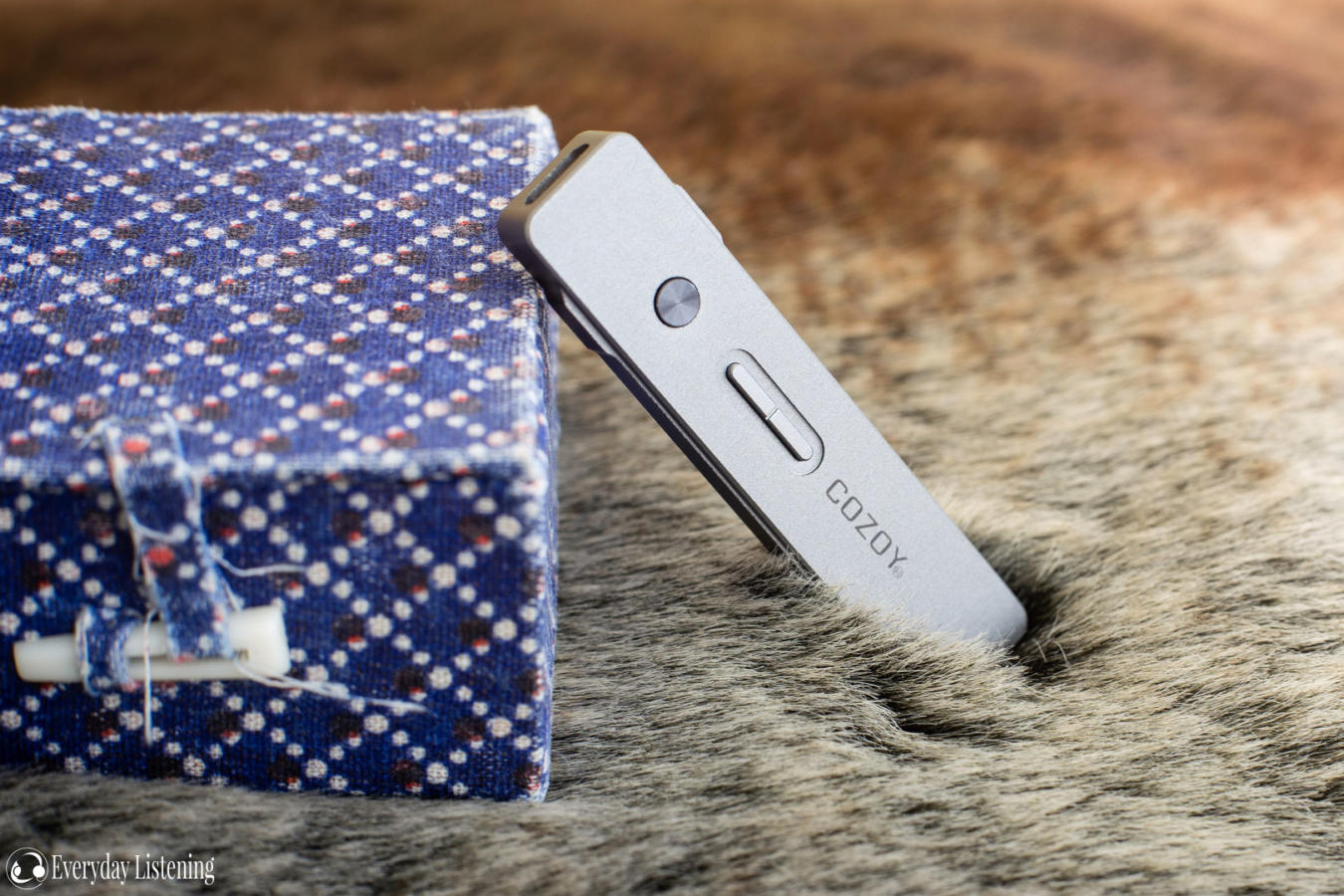 HTC U11: HTC generally provide a more full-bodied sound and they are renowned among smartphone manufacturers for their higher output power; I feel this well represents one of the better smartphone audio experiences out there. Despite this, the U11 doesn’t touch the Takt Pro when it comes to maximum volume and the Cozoy clearly drives high-impedance headphones better; not just in terms of volume, but tightness and control. The Takt also has an advantage in terms of signature and an even larger technical one. Where the U11 produces clearly enhanced bass and almost artificially enhanced clarity, the Takt’s low-end warmth is far more subtle and it’s resolving power is achieved through resolution as opposed to excessive colouration; it is simply the more linear source overall. The U11, alongside many smartphones, also has a higher output impedance.

As a result, the HTC tends to further skew the signature of multi-driver in-ears and this was especially evident when listening to the Noble Katana. The Takt delivers a noticeably more balanced sound with greater midrange presence. The U11 sounds slightly more recessed and thinner within its midrange where the Takt is more natural with far more realistic timbre. Highs are also more even and extended, the U11 is a bit more aggressive but treble is thinner than neutral, making them crisp but brittle. The Takt is smoother and more refined, it possesses notably higher levels of resolution and clarity in addition to greater dynamics and control. Unsurprisingly, this makes the Takt Pro a large upgrade over the U11, and its small dimensions make it a super practical substitute for the stock dongle. Additionally, power draw is not significantly higher than the dongle, I would estimate a 20% reduction in playback time which is small considering the differences in driving power and quality.

Fiio i1 ($40): The i1 is slightly more compact than the Takt Pro but has a less practical cylindrical design. It too has a nice aluminium housing but employs plastic buttons and a fixed, rubbery cable. That said, the Fiio is MFI certified, guaranteeing reliable connection to IOS devices. Immediately, the Fiio offers far lower driving power than the Takt Pro. It is also more evidently skewed in signature with a generally darker and considerably less dynamic sound. The i1 had a notably looser low-end compared to the more agile and defined Takt Pro. The Fiio has a similar tone with mid-bass emphasis but it is even warmer, producing a more coloured midrange as a result. Lower-mids are full-bodied on the i1 but not veiled though the Takt Pro is clearer, more layered and more linear.

Upper mids exemplify this difference in performance even further, the i1 sounds quite a bit darker and even slightly veiled by comparison, lacking the extension, resolution and clarity of the Cozoy. As a result, the Cozoy’s treble response is better integrated, enhancing detail presentation and separation. The i1 retrieves a nice amount of lower-treble details but smooths off considerably more than the Cozoy which offers better extension, more air and higher resolving power throughout. Of course, the price difference is large, but listening through a resolving earphone like the Katana or EX-1000 and the gap in performance becomes very clear; the Takt Pro is simply more resolving, textured and linear, it is not to be underestimated due to its size.

ADV Accessport ($60): The Accessport is actually a really nice little Lightning DAC for the price. Its plastic build isn’t as convincing as the Takt Pro and it isn’t quite as compact, but it does offer an additional port to charge the device while listening. The braided cable is also a nice addition and it is MFI certified for perfect compatibility with IOS devices. Sonically, the Accessport is impressively neutral and revealing for its modest asking price. It’s a more u-shaped source than the more sculpted Takt Pro with greater deep-bass emphasis and a slightly brighter signature up top. It too has very nice driving power and volume but it produces noticeable hiss with IEMs and still doesn’t drive high-impedance headphones quite as well as the Takt Pro; notably lacking low-end control. Bass isn’t rich as the Takt Pro nor is it quite as tight or detailed, but the Accessport serves defined, more neutrally toned notes with good separation.

Mids have greater clarity on the Accessport and foreground details are brought more to the fore as a result. It doesn’t sound quite as natural as the Takt Pro but does sound a little more neutral in tone due to its less coloured mid-bass. That said, the Takt Pro has clearly better extension and resolution, it is more layered with far greater background detail. Treble is also nicely detailed on the Accessport, it has very slightly more lower-treble attack than the Takt Pro but its sound contains less information overall. The Takt Pro also resolves more into its upper treble and delivers a noticeably larger, more separated stage. The differences aren’t as immediate compared to the i1 but again, resolving in-ears and headphones will discern clear differences over longer listening.

Oppo HA-2 ($300): The HA-2 utilises the same DAC chip as the Takt Pro but it is more orthodox in its tuning. It is a far larger device but also one that is designed for portable use with an internal battery. The Oppo has impeccable build quality and a design that is perfect for smartphone stacking. I also appreciate the Oppo’s ability to function as a power bank and its analogue volume control offers greater flexibility. The Oppo also has two gain settings and an in-built bass boost that the small Cozoy lacks. However, the differences in sound quality are not what one would expect given the differences in size. The Oppo is more neutral and analytical but it also has some glare within its middle treble that can overshadow some lower-treble details.

The Oppo has superior driving power, especially noticeable when paired with planars, but it also produces a lot more hiss with IEMs where the Takt Pro is essentially silent. The Oppo delivers a slightly more solid sub-bass impact and less coloured mid-bass response. As a result, lower-mids are slightly more defined and slightly more separated. Upper mids are similar on both, the Oppo being slightly brighter, the Cozoy slightly smoother. Treble is also similar in signature on both but more linear and slightly attenuated on the Takt Pro. As a result, the Takt sounds less aggressive and airy but also cleaner with a darker background. Through this, the Oppo does produce a larger stage and more precise imaging, but the Cozoy sounds more focused with greater treble separation.

Fiio X7 II ($650): The X7 II isn’t directly comparable to the Takt Pro as the Cozoy isn’t directly comparable to its cheaper counterparts; but Fiio’s current flagship does represent a nice, neutrally orientated benchmark source. The X7 II is more balanced than the Cozoy, most notably within its midrange and treble where the Cozoy sounds noticeably darker. The Cozoy unsurprisingly serves up a warmer, more organic low-end while the X7 II offers a slightly enhanced deep-bass impact paired with a cleaner mid-bass. Both are tight but the Fiio is more defined and separated. Mids are more linear and more transparent throughout on the X7 II. The Fiio also produces more lucid resolution and retrieves more detail within the background layers of its presentation.

That said, the Cozoy does sound slightly more dynamic if less articulate than the more technical Fiio. Treble tells a similar story, the Takt Pro is smoother and equally well-extended but lower-treble possesses a little less attack and clarity than the Fiio. Middle treble is slightly enhanced on the Cozoy, producing a little more shimmer, but the Fiio does extend more linearly into the upper-treble frequencies, retrieving more micro-detail as a result. The Fiio also produces an appreciably larger stage and imaging is more multi-dimensional and coherent as a result of its greater linearity and resolution. The Fiio also separates better throughout and its slightly enhanced clarity does not compromise its realistic timbre.

I’ve grown to love the Takt Pro; gadgets like this have never possessed such a pertinent role than in today’s society and the Takt’s flexible form factor fills a perfect niche within the modern smart ecosystem. As a jack-less smartphone user, the Takt’s minute dimensions and physical controls make it a perfect substitute for the frankly underwhelming solution provided from factory. The Takt also provides large sonic upgrades over the majority of aftermarket dongle-style DACs and plenty of conventional portable sources too.

Buyers will find much to love within the Takt Pro’s tastefully sculpted signature and high resolving power. It isn’t the most revealing, neutral source, but Cozoy’s latest is still impressively technical and immensely musical. Add in capable driving power, a black background and multi-platform support, and the Takt Pro offers versatility that belies its size and deserves its price. This isn’t a reference source rather, Cozoy have produced a rich, inviting yet balanced DAC that finds synergy with a wide range of gear.

The Takt Pro is available for purchase directly from Cozoy here for $289 USD.  I am not affiliated with Cozoy and receive no earnings from purchases through this link.