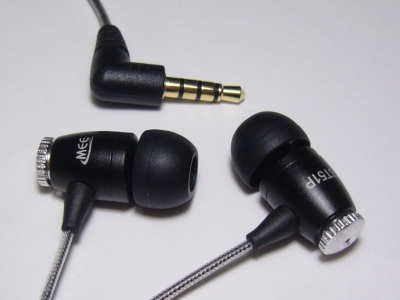 Accessories (4/5) – Single-flange (3 sizes) and bi-flange silicone tips, shirt clip, hard clamshell carrying case, and Sound Preference tuning ports (3 sets)
Build Quality (4/5) – The SP51 uses metal housings with screw-in rear ports identical to those of the Hippo VB, though Meelec chose to add a mesh filter to the nozzle. The clear cabling is typical Meelec – more supple and yet thicker than the rubbery cords used by Hippo and terminated with a nice L-plug
Isolation (3/5) – Fairly average due to large rear vent but good enough for daily use
Microphonics (4/5) – Quite good with cable-down wear, nonexistent with over-the-ear fitment
Comfort (3.5/5) – The SP51s are typical straight-barrel IEMS but the housings aren’t small or rounded at the front, resulting in relatively shallow fitment. The cord is rather flexible and wearing them over-the-ear is easy enough

Sound (6.9/10) – Though the SP51 uses the same housings as the Hippo VB, the 10mm drivers chosen by Meelec are unrelated to those selected by Hippo and result in a substantially different sound signature. The ‘Sound Preference’ tuning system is analogous to Hippo’s ‘Variable Bass’ tuning and consists of three interchangeable screw-in rear ports. Unlike the 1-dot, 2-dot, and 3-dot ports used by the VB, the ports of the SP51 are characterized by their color – black (“extreme bass”), gun metal (“enhanced bass”), and silver (“balanced”). The black port is an open vent and provides the maximum amount of bass (though not as much as leaving the earphones open at the rear, which is not recommended as it hurts definition across the range). I am not a huge fan of the ‘extreme bass’ configuration as it takes away much of the bite of the SP51, reducing bass definition as well as crispness in the other frequencies. The silver and gun metal ports both feature the same vent as the black port but with a different acoustic filter placed in front of it. The silver port, dubbed ‘balanced’ by Meelec, is my favourite of the three. The gun metal one, dubbed ‘enhanced bass’, hypes up the bass and adds some emphasis to the lower treble, The gun metal port will appeal to those looking for more of an M6/M9-type sound from the SP51 and may as well have been called the ‘fun’ port. I feel that it is the silver and gun metal ports that best exemplify the technical capabilities of the SP51 while the black port sacrifices too much resolution to deliver huge amounts of soft-edged impact.

As with so many mainstream earphones, the SP51 was designed to first and foremost satisfy the bass lover. Even in the balanced, silver-port configuration, the bass of the SP51 is above baseline and slightly more prominent than with the lower-end CX21 model. With the gun metal and black ports, the bass quantity of the SP51 competes with Meelec’s M-series earphones as well as sets like the Sennheiser IE6 and Thinksound TS02 – earphones that I can call ‘bass-heavy’ without thinking twice. Most of the emphasis is on the mid-bass frequencies but low end extension is quite good as well. What’s more interesting is the character of the SP51’s bass. It is soft and round rather than sharp and punchy, giving up a bit of speed and quick attack/decay times for smoothness. It also tends towards ‘boomy’ as the amount of air allowed to escape form the rear vent is increased. In the ‘balanced’ configuration there is slightly more impact to the bass than there is texture and note but since the bass is kept well in check, this isn’t a problem. However, the bass-heavy configuration seems to amplify both aspects equally, resulting in a whole lot of air being moved but only moderate levels of texture. On extremely fast tracks this kind of presentation can get the best of any earphone and the SP51 is no exception – the huge amount of impact can get smeared with the black filters.

In the balanced configuration, the midrange of the earphones is ever so slightly recessed but the laid-back nature of the bass makes this a non-issue. With the ‘fun’ and ‘bass-heavy’ filters, the midrange recession becomes slightly more noticeable and bass bleed – slightly more likely. However, next to sets such as the Fischer Audio Eterna, the SP51 is still a well-balanced earphone. The boost in the lower midrange with the black and gun metal filters results in vocals being given a bit of extra fullness and microdetail is slightly smoothed-over on the whole. Next to Meelec’s own CC51, the SP51 sounds somewhat distant and lacks most of the warmth and thickness that make the CC51 sound so ‘creamy’. It’s no surprise, then, that the cheaper SP51 can keep up with the CC51 in clarity, though the 6mm microdriver used in the ceramics has better detail and resolution.

It’s worth noting that that out of the box my pair of SP51s was unpleasantly sibilant – bad enough for me to forego using the earphones completely for the first 50 hours. I can still hear a touch of sibilance out of them on certain tracks with the gun metal-colored rear port but not with the silver one, which I prefer, or the bass-heavy black one. With the silver plate in place, the treble of the SP51 is clear and articulate. It won’t keep up with the armature-based A151 in detail but performs fairly well for a mid-range dynamic-driver earphone, much like that of the UE500 or Thinksound TS02. Extension is reasonably good and the earphones tend to sound airy no matter which tuning ports are used. The overall presentation of the SP51 is spacious and competent. Though the SP51 has better soundstage width than the CC51, it is slightly more vague when it comes to positioning. The CC51, while a bit intimate on the whole, presents music more coherently and three-dimensionally. The SP51, on the other hand, is reminiscent of Meelec’s aging M9 – airy and spacious but wider than it is deep and not pinpoint-accurate. It’s a fitting presentation for the type of smooth, slightly boomy sound that the SP51 puts out but competing with the higher-end CC51 and A151 in accuracy was obviously not on the agenda when the earphone was tuned.

Value (8/10) – Though the Hippo VB may seem like the most natural point of comparison for Meelec’s new tunable earphone, the SP51 pursues a slightly different signature – one that emphasizes mid-bass at its bassiest and nothing at its most balanced. Though the ports of the SP51 seem more potent at shaping its sound signature than those of the hippo VB, it still is not quite the 3-in-1 earphone many budget-minded music lovers might hope for. Still, rather than simply pick one port and stick with it, I imagine some may alternate between two of the three. For me, the silver “balanced” port edges out the gun metal “enhanced bass” port slightly, though many will find the SP51 to be lacking impact in this configuration. With the “enhanced bass” port, the SP51 can be considered a less v-shaped and more refined upgrade to the popular M9 and M6 models but the black “extreme bass” port sacrifices too much tightness in favor of bass ‘boom’ in my opinion. Ultimately, the SP51 makes a good entry-level set for those curious to play with the balance of an earphone and, while it won’t quite keep up with the Hippo VB when both earphones perform at their best, the SP51 is cheaper and more readily available. Add to that the superior cable of the Meelec version and the option of having the smartphone-compatible SP51P for $10 more and the SP51 starts to make sense in terms of value-for-money.