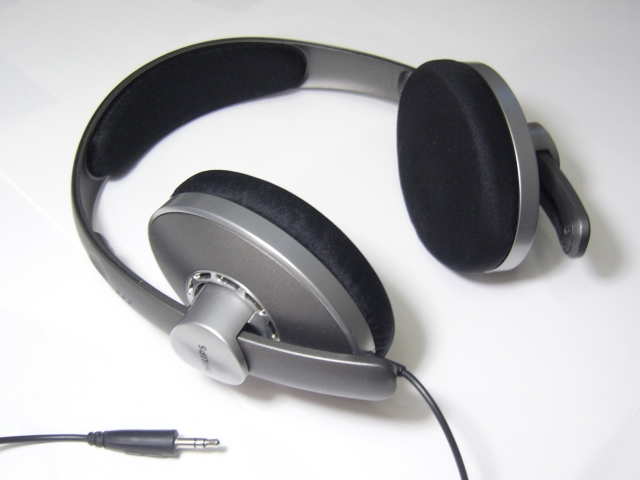 Brief: I’ve owned the SHP5400 for quite a long time and they’ve been a great companion for use while moving about. Though Philips has ceased selling the SHP5400 in the US, I felt that they deserved a review still, if only to show what the manufacturer is capable of.

Build Quality (6.5/10): The SHP5400 are strange beasts. The construction is extremely simple and yet unique in its own way. The single-piece plastic headband threads through the cups, which slide up and down quite freely. As a result of the loose attachment of the cups, the whole structure is a bit wobbly. The pads and headband are made of foam and covered with a smooth material not unlike that used on the Ultrasone Zinos. The single-sided cable is threaded through the headband internally and has a length of six feet – quite excessive for portable use. The cable is soft and flexible, however, so I had no problem tying up a loop and using the headphones on the go, a task made much more difficult by thick cables such as those found on Grados and the ATH-M30.

Comfort (7.5/10): The pads and headband of the SHP5400 are quite soft and don’t heat up nearly as much as pleather padding does. Clamping force is rather high, however, resulting in comfort that doesn’t last as long as with some looser-fitting headphones. Since the headband narrows towards the bottom, I imagine that the clamping force would be greater for those with larger heads.

Isolation (4/10): The SHP5400 are semi-open headphones and feature large vents on the rear of the cups. They are also most definitely supraaural, resulting in mild leakage and not much isolation from external noise.

Sound (7/10): The SHP5400 are quite different from most other headphones I’ve heard in the $50 range. Their areas of expertise, so to speak, are speed and clarity. The bass is very well-controlled and extremely tight. Extension is mediocre but the speed is tremendous. The bottom end is very transparent and lacks slightly in texture, giving them a ghost-like sound that can be very interesting with the right tracks. Expectedly there is no midrange bleed. The mids are articulated and clear, though a bit of extra volume is recommended to really bring out the detail. The soundstage is wide and the mids can sound a bit distant as a result but separation and positioning are solid. Unlike the Panasonic RP-HTX7 I’ve been using recently, the upper midrange and lower treble of the SHP5400 are accented without any harshness or sibilance. The upper end is extended and very crisp. The signature leans towards brightness and they can sound a little cold. I wouldn’t, however, call them neutral or analytical. The sound is shiny and shimmering with energy and excitement despite them not being as forward and aggressive as, say, the Grado SR60i. The SHP5400 are also surprisingly inefficient. At my maximimum listening volume with most portable headphones (around 50% on the Sansa Fuze), the SHP5400 are just becoming audible. Combine that with the fact that the midrange is really brought into perspective only at higher volumes and a powerful player or portable amp is recommended to bring out the full potential of these cans.

Value (7.5/10). (MSRP: $99.99, Street Price: $55) Despite being discontinued in the US, I’ve seen NOS sets of these cans pop up on eBay and various internet outlets on occasion. For the price, they are definitely worth picking up for anyone who enjoys bright, clear, and fast sound. Like the majority of mid-range Philips cans I’ve owned, the bang/buck ratio is quite high on the SHP5400 and I really hope Philips has a replacement in store for the US market at some point in the future.