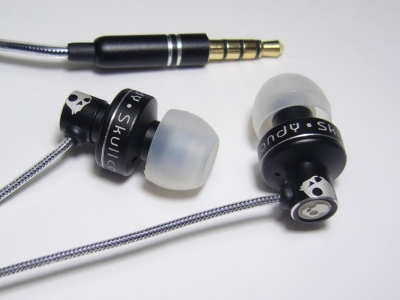 Accessories (2.5/5) – Single-flange (3 sizes) silicone tips, Comply foam tips, and soft carrying pouch (note: 2010 version ships with clamshell case instead)
Build Quality (2.5/5) – The shells are metal but feel very light and a little cheap. Strain relief is nonexistent on housing entry and at the y-split. The clear cable resembles Meelec cables externally but is thinner and has a tendency to kink. In addition, the 3.3’ cable length is far too short for the average adult
Isolation (2.5/5) – Low since the earphones are ported and the driver bulges prevent deep insertion. The included Comply tips help a bit
Microphonics (4/5) – Very low
Comfort (2.5/5) – Though the FMJs are straight-barrel earphones, the big metal bulge housing the drivers can get in the way of wearing them comfortably for more than an hour or two. Wearing them over-the-ear is more comfortable but made needlessly difficult by the short cable

Sound (3.6/10) – The FMJ is my third experience with Skullcandy earphones, following the entry-level Ink’d buds and the mid-range TiTans, which had somewhat similar sound signatures – powerful and forward bass, thin and dry mids, and prominent but harsh treble. The FMJ surprised me, not only by being so **** dreadful that I considered giving up on this review but also by taking on a different sound signature than the other Skullcandy IEMs. The FMJs are generally mid-forward but the bass certainly makes its presence known. Unlike the TiTans, which have fairly good, if overdone, low end extension, the FMJs carry a massive amount of mid- and upper- bass and little sub-bass. The extremely forward midrange makes the FMJ sound more balanced than the other Skullcandy earphones but at higher volumes the bass still reveals itself to be fat and muddy – certainly not as accurate or controlled as on the JVC Marshmallows or Sony MDR-EX082. In addition, drum crackle can be unpleasantly sharp, sometimes startlingly so – an issue of tuning rather than technical capability as the higher-end Grado iGi exhibits this as well.

One upside of the forward midrange is that the bass fails to overpower it at reasonable listening volumes. There is also an illusion of clarity brought about by the peculiar balance of the midrange – vocals come across powerfully and intelligibly. The natural clarity of the FMJs, however, is at best on par with the much-cheaper Earsquake SHA or Meelec M2. Detail is similarly underwhelming, though again the forward mids act to force what little detail there is on the listener. Those who have never before owned good earphones will be tricked into thinking that the FMJs are reproducing parts of the music stock earphones do not while in reality they are simply terrible at differentiating between a track’s background and foreground (more on this later).

The treble is admittedly better than the slightly harsh highs of the Ink’d buds and the metallic high end of the TiTans. The FMJs are slightly smoother and roll off later than the Ink’d buds. They are also warmer in tone and more natural-sounding than the TiTans. That’s where the good new ends, however – the presentation of the FMJs is one of the most congested I have ever heard from a >$20 pair of earphones. The biggest problem is that they have no soundstage – zip, zilch, nada. I’ve heard some narrow-sounding earphones before but the FMJ has the sonic space of a Porta Potty. Expectedly, most tracks sound at least slightly congested (just imagine cramming a four-piece band into said Porta Potty). Instrumental separation, imaging, and positioning are all quite poor – everything just sounds in-your-face forward. There are certainly listeners who like a more forward presentation but I can’t help but think that the FMJs are better suited for audiobooks and voice calls than music or movies.

Value (4/10) – Let’s face it – Skullcandy products are not very well-regarded around Head-Fi for reasons beyond simple audiophile snobbishness. Still, the entry-level Ink’d buds prove that even Skullcandy products can be good value for money when priced low enough. The FMJ, however, is undoubtedly one of the least enjoyable listening experiences I’ve had in the history of this thread. It is not the lowest-scoring earphone in this review because frankly, it isn’t that bad from a technical standpoint, but even those in search of an extremely forward sound heavy on both the lows and mids can do better for the money. Unless, of course, a nonexistent soundstage and mediocre fit, build quality, and isolation are the other requirements.

Pros: Not bass monsters, come with Comply tips, low cable noise
Cons: Short cable; will be uncomfortable for some; poor clarity, no soundstage