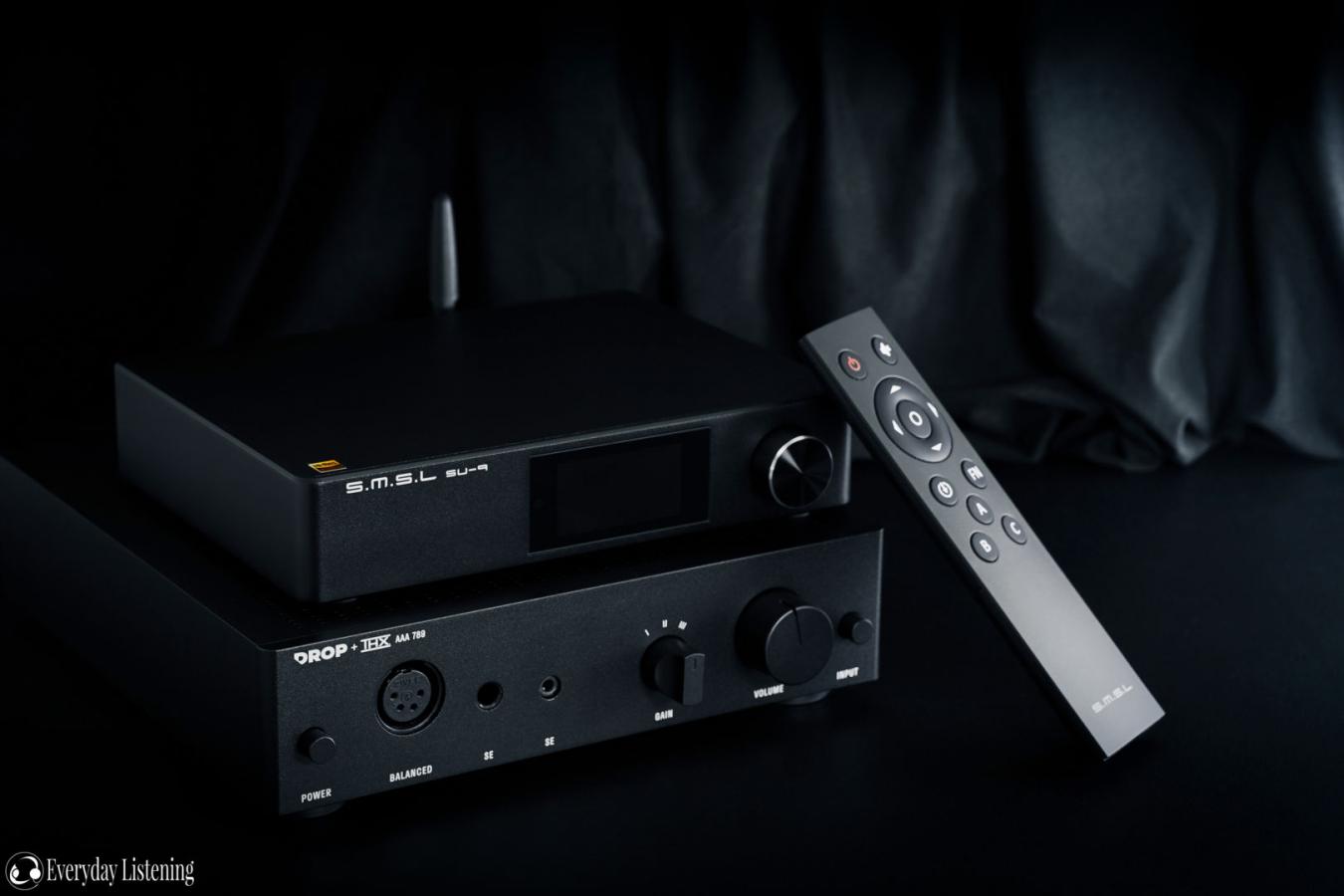 Though I am enthusiastic about the user experience on this DAC, I have experienced a few issues during testing. One interesting aspect similar to impressions of the SU-8 is that SMSL have only placed 3 feet on the bottom. In turn, putting other devices on top of the DAC can cause it to wobble, adding just one more silicone foot would have alleviated this. More substantially, I did notice coil whine coming from my unit. I tested from multiple different power outlets on different circuits with the same result. This isn’t something I’ve experienced from the vast majority of other sources I’ve tested so I would not think it due to my particular setup. Noise isn’t introduced into the actual sound output, but the whine coming from the device itself is irksome especially when listening to open-back headphones or earbuds and not what I would expect from a high-end source like this. SMSL engineers also confirmed this is normal behaviour of the switching power supply, but that the noise on my unit is at the higher end of normal.

DACs that offer insanely good measured performance such as this often provide a very similar style of sound; that being something tonally transparent, technical and subjectively powerful. And in listening, this is indeed the case, the SU-9 is very linear, very balanced and basically tonally uncoloured. One may argue that such a sound may come across as sterile or clinical in the sense that it lacks inviting musical characteristics. Ultimately, it depends on your priorities. For me as a reviewer, I strive for utmost transparency as that creates the most stable foundation to assess the attached gear. Take note also, that even the most transparent sound possible is not necessarily the most faithful sound to the creator’s intention; whether that be music or headphones, one would have to recreate the audio chain used by the mixers or engineers in order to achieve this. As always, it remains a preference though I would posit that a transparent source is desirable in terms of widespread synergy.

The SU-9 offers a balanced, linear and smooth sound with no notable tonal colouration. This is not a given on sources, some of which introduce colouration intentionally in order to cater towards different listener preferences. Compared to the Khadas Tone Board, a single ESS 9038Q2M implementation, the SU-9 provides a similar though notably more refined and coherent expression, especially noticeable on a micro-scale looking at individual note expression. Indeed, the SU-9’s specialty is its highly organized sound, and the ability to retain organization, separation and immersion even during complex passages. I would dub this a slightly full-bodied source, albeit in the absence of warmth or any notable bass bolstering. It has very high resolving power and a satisfying effortlessness in its expression of fine details but minimal aggression in so doing.

A few reviewers mentioned similar thoughts in their evaluation of the SU-8, the sound colour modes are subtle, tasteful and effective. This makes them more useful than the overt eQ presets found on some devices that overly skew the sound and timbre. Actually, when you read SMSL’s content online, this isn’t an eQ at all, but rather, a setting that alters the level of distortion in order to tailor the sound. In turn, the effect is a little more authentic and there is a noticeable albeit subtle difference between them. The rich setting offers a more L-shaped sound, it sounds bigger in the lows and smoother up top. Crystal meanwhile, is the opposite, offering a crisper high-end and, to some extent, upper-midrange for a higher-clarity sound. The tube setting was most subtle to me, it appears to introduce a hint of mid-bass and take down the upper-midrange just slightly for a warmer, smoother and slightly more laid-back sound. The 1-3 settings appear to increase the intensity of the effect.

Bass reaches deep and showcases a linear and balanced presentation as one would expect. Sub-bass is powerful and surgical in its control, notes displaying a certain solidity and definition that lesser DACs don’t provide. This continues to the mid-bass that is even, clean and very high-definition. The SU-9 isn’t an aggressive source, but smooth and effortless in its note presentation. Attack is natural and decay is accurate rather than gunning for utmost speed and tactility. Timing is also very exact, so note expression is composed and controlled which, combined with the accurate transient response, retains high separation throughout. Again, this isn’t the visceral performer, but a very balanced, well-controlled and discerning presentation.

The midrange offers a similarly accurate and expressive representation. Though both the Khadas Tone Board and SU-9 offer tonal neutrality, the SU-9 does so while retaining a more coherent note presentation. It has better ability to stage and layer, in particular, presenting vocals and instruments with greater dimension. Notes have slightly greater body on the SU-9 though as the stage is more organized and multi-dimensional, separation remains strong. Resolution is a touch higher here too and articulation just a touch smoother which contributes to the aforementioned qualities. The SU-9 is not a warm or vivid source by any stretch, but portrays inviting dimension and masterful coherence.

When one thinks of a detailed and highly resolving top-end, the presentation offered by the SU-9 likely isn’t what first comes to mind. It is likely something along the lines of that provided by the cheaper Tone Board; that being, a sharp, quick attack providing a more aggressive detail portrayal despite a lack of overt brightness. The SU-9 is surely a more refined presentation. Under direct, volume matched comparison, the presentation on offer strikes superb balance between transient and body that is less instantly gratifying but so much more rewarding during critical listening.

It comes across as smoother than the harder-edged Tone Board, but provides greater body and texture in return. It sounds less artificial, less brittle and vastly more refined with zero grain and an awesome, linear extension. Accordingly, the SU-9 achieves a very effortless portrayal of details, never pushed forth into the listener’s face but meticulously composed with excellent fine and micro-detail retrieval in both the foreground and background. This is undoubtedly a high-resolution source and a very mature ESS implementation devoid of glare or harshness in any manifestation albeit not for those wanting the sharpest and crispest transients.

The soundstage presentation is also a highlight of this DAC, not necessarily in dimension, but mostly imaging. It immediately has better expansion in all axis compared to the Tone Board, but this isn’t especially apparent unless under direct comparison, nothing like the difference between different headphones for instance. The imaging is the highlight as I’m sure you’re tired of me reiterating – it is that good. Switching between the two sources reveals a hugely more dimensional sound from the SU-9, it really is an astounding difference that I did not personally expect.

Vocals are strongly centred on both but the level of organization is vastly different. The SU-9 offers an excellent portrayal of distance especially. Where the lower-end DACs I’ve tested tend to push either near or far, the SU-9 organises elements into layers, each layers is well-defined and well-delineated from the next so you end up with a considerably more immersive and realistic portrayal. Separation is naturally superior with a grander stage and more organized presentation. There is little comparison here as the price difference would suggest.

It goes without saying that the SU-9 and THX 789 are a match made in heaven just as the SU-8 was before it. You would want to spring for at least a similar tier of amplifier as most cheaper options often do not offer balanced inputs and output which is money wasted investing in the SU-9. The powerful, transparent sound alongside almost class-leading measurable performance are an ideal counterpart to such a technical DAC. I do believe this is also why there is such a pronounced audible difference between the two – albeit I did not conduct blind testing to confirm this. I would not recommend a warmer amplifier due to the full-bodied midrange presentation that may lower separation and definition. It should also be noted that the THX 789 and its nearest competitor, the SMSL SP200 are also not true balanced designs, so going for something that offers such a design will invariably benefit more from the SU-9’s balanced outputs as well.

To say that I very much enjoyed my time with the SMSL SU-9 would be an understatement. Even from the perspective of a cynic, I did find the DAC to offer very real audible benefits over the cheaper Tone Board despite both, in theory, performing above the range of human hearing and offering excellent implementations of ESS’ flagship chip line. I was especially impressed by the SU-9’s imaging performance, offering a very layered and organized presentation with an immersive portrayal of distance and direction. It is not the most engaging source, being ever so slightly on the smoother side. But it remains a highly-resolving one with zero grain or brittleness even into the very highest registers. The build quality is good, the remote and rotary encoder navigation intuitive. The clear screen is the cherry on top, aiding straight forward daily usability. Though we are venturing into the realms of diminishing returns here, this is far from the most expensive source you can buy whilst delivering performance that sits in the same leagues. The SU-9 is for those wanting a balanced DAC with a pure sound, excellent staging and strong resolving power without spending a small fortune to get it.

The SU-9 is available from Apos Audio (International) for $439.99 USD at the time of writing. Please see our affiliate link for the most updated pricing, availability and configurations.