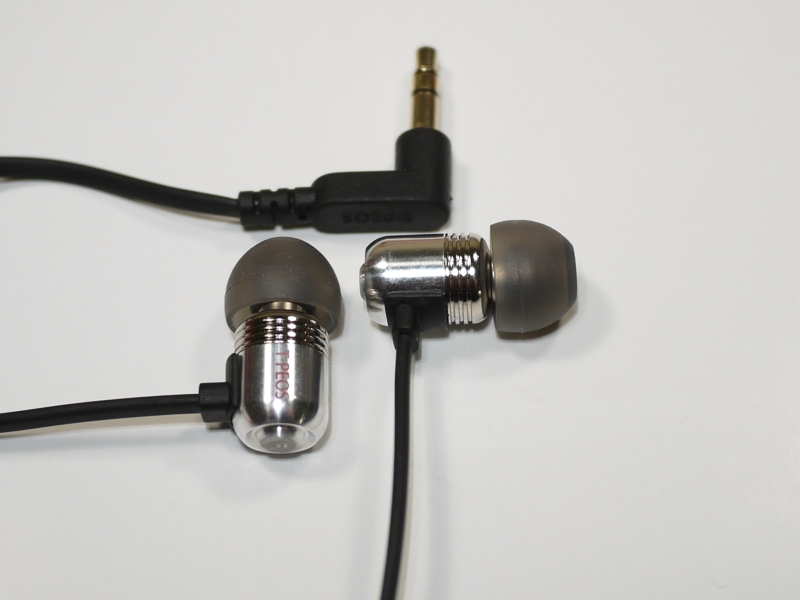 Accessories (1.5/5) – Single-flange silicone tips (3 sizes) and shirt clip
Build Quality (4/5) – The construction of the Popular is very similar to T-Peos’ similarly-priced Tank model. It uses metal housings akin to those of the higher-end D200 and H-100 models, narrow flat cables, and a well-relieved L-plug
Isolation (3/5) – Isolation is on par with other earphones of this type
Microphonics (3/5) – Average with cable-down wear; good when worn over-the-ear
Comfort (4/5) – The small dynamic driver permits a compact housing design. The earphones can be worn comfortably both cable-down and cable-up, though the flat cable with no cable cinch can be a bit resistant to over-the-ear wear

Sound (7.8/10) – The T-Peos Popular is similar to the Tank in price and construction, and also uses 8mm dynamic drivers, but delivers a more balanced and neutral sound compared to the warmer, bassier Tank. The less dominant low end actually benefits the Popular, allowing the bass quality to go from great to outstanding. The earphones are still not bass-light by any stretch – bass impact is only a hair below the VSonic VSD1S, for example, and greater than with the Astrotec AM-800 and the dual-driver MOE-SS01. Despite this, bass control is excellent, resulting one of the best bass quality/quantity ratios I’ve heard among budget earphones.

The Popular has a slightly v-shaped overall signature but its midrange doesn’t appear notably recessed – less so than with the VSD1S and especially the VSonic GR02 Bass Edition, for example. There’s no veiling of the midrange, which helps the Popular also achieve fantastic clarity, nearly on par with the MOE-SS01.

At the top, the Popular has a similar character to the Tank, with a treble peak or two resulting in a sound that is a touch harsher than I would like, especially at higher volumes. This is more noticeable with the Popular than the Tank thanks to its less bassy sound signature. It can accentuate sibilance some as well. In comparison, the MOE-SS01 has a slightly less edgy treble character whereas the VSonic GR02 Bass Edition fares similarly to the T-Peos unit.

The Popular is a little more spacious and images better than the bassier Tank, though it still offers only average soundstage depth and is less spacious than the VSonic VSD1S, for example, or the MOE-SS01.

VSonic’s VSD1S holds its own against any earphone in the price range, but the T-Peos Popular is remarkably adept at highlighting the its few weaknesses. The VSD1S has a hair more mid-bass presence than the Popular, which give it a warmer tone but also makes its mids sound more recessed and even somewhat veiled. It has a more full-bodied sound while the Popular has an edge in overall clarity but also more presence in the upper midrange and lower treble, which makes it harsher compared to the VSonic unit. The VSD1S is a little more sibilant than the T-Peos and has a wider, more spaced-out presentation.

The AM-800 is a bright, mildly v-shaped earphone that makes a pretty decent signature match for the Popular. It has less bass than the T-Peos unit and sounds a touch more v-shaped courtesy of its brighter treble. The Popular has both greater bass quantity and superior bass depth, with more slam and rumble. The top-end emphasis of the AM-800 seems to enhance its clarity, however, akin to a treble-boost equalizer setting. The Astrotec also has a wider soundstage, sounding more distant, while the Popular is less spacious, but more cohesive.

The A63 is a mid-forward earphone that makes for an interesting contrast to the Popular. Naturally, the mids of the somewhat v-shaped Popular are noticeably recessed in comparison, but the T-Peos also offers less mid-bass, sounding tighter and making the A63 appear somewhat bloated in comparison. The sound of the Popular is brighter, and though its treble is harsher and more splashy, it is a little clearer overall. However, the A63 is warmer more natural from a tonal standpoint, thanks in part to the smoother treble, and has a more spacious and uncongested presentation.

Value (8.5/10) – The Popular is my favorite of the three new dynamic-driver sets from T-Peos (the other two being the Tank and Spider models) thanks to its clearer, more neutral sound. The Popular is also a standout in bass quality, and though its treble can be somewhat harsh, overall performance is very impressive for the price. As with the other T-Peos earphones I’ve tried, it boasts a sturdy construction and is comfortable in the ear—there’s really not much more to ask of an IEM priced below $40.