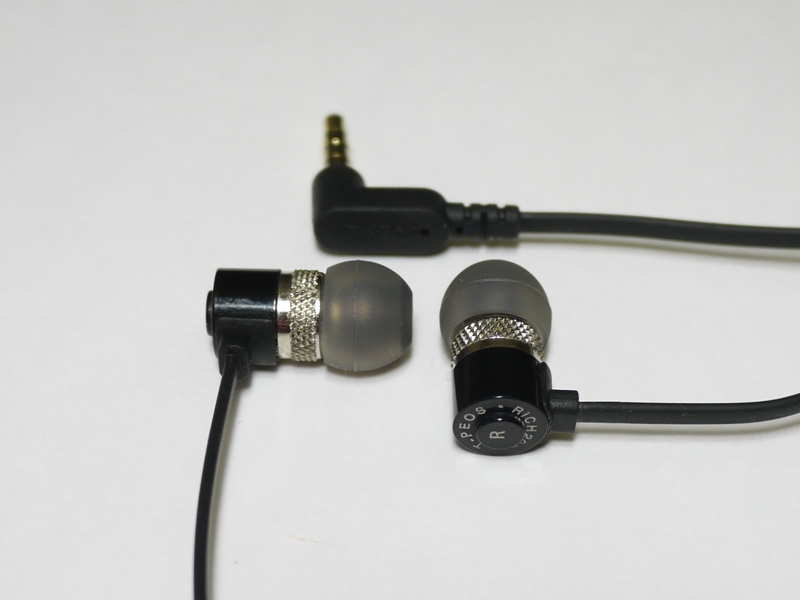 Accessories (1.5/5) – Single-flange silicone tips (3 sizes) and shirt clip
Build Quality (4/5) – The Rich200 is built similarly to T-Peos’ other earphones, with metal housings, narrow flat cables, and a well-relieved low-profile L-plug. It also has an inline mic with a 1-button remote, but no cable cinch
Isolation (3/5) – On par with other earphones of this type
Microphonics (3/5) – Average with cable-down wear; good when worn over-the-ear
Comfort (4/5) – The 8mm driver permits a slim and compact design. The earphones can be worn comfortably both cable-down and cable up, though the flat cable can be a bit resistant to over-the-ear wear and the lack of a cable cinch doesn’t help

Sound (7.9/10) – The Rich200 is yet another budget set from T-Peos, sister earphone to the Tank, Popular, and D200R models that I’ve already reviewed. It is priced similarly to the others but – in some ways, at least – is the best of the bunch. It sounds tighter and clearer than the slightly bassier Tank, smoother than the Popular, and more controlled at the low end (but also more mid-recessed) than the D200R.

The most impressive thing about the Rich200 is the bass – the earphones have an outstanding balance of bass quality vs. quantity, perhaps the best I’ve ever encountered with a budget earphone. The low end is punchy and extended, but also very controlled.

The second most impressive characteristic of the Rich200 is its clarity. The overall sound signature is a touch v-shaped but the bass quality allows the midrange to avoid veiling. Clarity lags just a touch behind the more mid-recessed VSonic VSD1S and the colder, brighter-sounding MOE-SS01, both of which are pricier than the Rich200.

There is some treble elevation, similar to what I’ve encountered with the other T-Peos sets I have tried. At times it results in mild harshness and can accentuate sibilance some, but overall the Rich200 is rather composed. The MOE-SS01, for example, has more upper midrange/treble presence than the Rich200, and the VSonic VSD1S sounds more sibilant. Soundstaging is, as with other entry-level T-Peos earphones, nothing to write home about. The presentation has average depth and width. Imaging is pretty good thanks to the clarity but there’s just not much sonic space for the earphones to play with.

The T-Peos D200R and Rich200 boast similar audio performance but differ in sound signature, with the Rich200 offering up a slightly more v-shaped response. Its bass is a bit more impactful but impresses greatly with its quality – it is very tight and extended. The D200R, on the other hand, boasts more presence in the midrange and has a more full-bodied sound. The mids of the Rich200 are a touch more recessed, but also clearer. Part of the clarity comes from the stronger treble, which also causes it to be somewhat more harsh and sibilance-prone than the D200R.

The similarities in price, form factor, and even feature set make choosing between these two earphones more difficult than it should be, but what it comes down to is this: the Rich200 has better bass while mids are a toss-up – fuller and more forward on the D200R, more recessed but clearer on the Rich200. Treble is better with the D200R and its less v-shaped sound grants it a slightly more natural tone.

The Xiaomi Piston 2 is warm and bassy, but nonetheless a very capable earphone priced similarly to the Rich200, making for a worthwhile comparison. In short, the Rich200 has an advantage in bass quality (but not quantity) and clarity, but loses out in treble quality and soundstaging.

Compared to the Piston 2, the bass quality of the Rich200 is significantly better – it is less mid-bassy, resulting in an overall tighter and cleaner sound, but still has similarly good depth. The Rich200 is also clearer – but thinner-sounding – compared to the warmer and more full-bodied Piston 2. The Piston 2 is smoother and more forgiving up top, however, making the Rich200 sound harsh in comparison. It also has a wider, more spacious, more out-of-the-head presentation.

Astrotec’s dynamic-driver AM-800 boasts a clear, slightly v-shaped sound, but deviates quite a bit from the listening experience provided by the T-Peos Rich200. The AM-800 is notable for its wide, open, and airy sound, and that’s where it differs most from the T-Peos unit – the AM-800 sounds like an open-back headphone, while the Rich200 sounds like a sealed one, both in presentation and bass impact. The bass of the Rich200 is more authoritative –deeper and punchier, whereas the AM-800 lacks depth and sounds lighter and less weighty.

Tonally, the Rich200 is warmer while the AM-800 is brighter, lending a more treble-heavy tilt to its v-shaped signature. This results in the Astrotec unit appearing a bit clearer, but the difference is minute. In addition, while the Rich200 has greater bass quantity, the quality of its low end doesn’t suffer – it is just as tight as the AM-800. The presentation of the T-Peos is smaller, more closed-in, and more in-the-head, however.

Brainwavz’ S1 model is yet another v-shaped in-ear earphone, this one with an unabashedly bass-heavy sound signature. It pumps out significantly more bass than the Rich200, but sounds boomier as well. Its bass tends to be more intrusive, resulting in more veiled mids in comparison to the tight and controlled T-Peos unit. The tone of the S1 is warmer and it sounds more full-bodied overall while the Rich200 sounds thinner, but also clearer. The Rich200 is brighter, thanks mostly to having much less bass than the S1, but still a touch smoother. One area where the S1 does win is presentation – while it doesn’t image much better than the Rich200, it sounds more spacious and unconstrained. It is also more efficient.

Value (9/10) – With its comfortable form factor, sturdy construction, and headset functionality, the T-Peos Rich200 offers excellent practicality and matching audio performance. Its sound is notable for clean, impactful, extended bass and good clarity, though those with different priorities may prefer its sister model, the D200R. For under $35, the Rich200 is an easy recommendation.