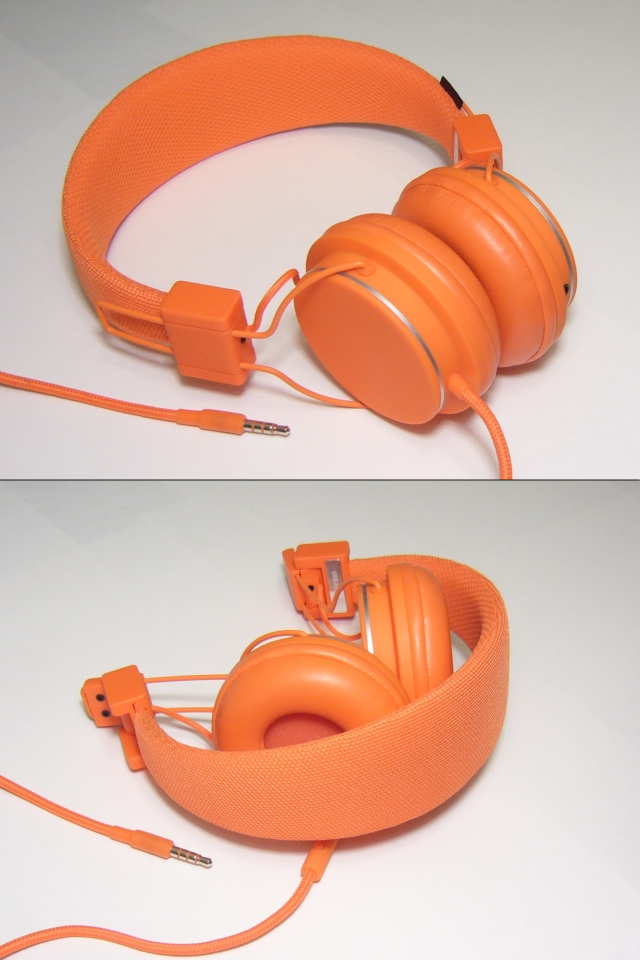 MSRP: $59.90 (manufacturer’s page)
Current Price: $39 from amazon.com
Build Quality (7/10): Available in a variety of striking colors, the Plattan boasts a simple and yet functional structure of matte plastics, cloth, and metal. The wide padded headband is covered in a mesh material and matches well with the single-sided nylon-sheathed cable. The plastic cups and hinges show some molding seams but nothing I can’t live with for the price. The cups are accented with a metal ring around the outside and the entire structure can look quite good, depending on the color (more than a dozen monochromatic color schemes are available). Interesting features include an inline microphone and single-button remote as well as a pass-through 3.5mm jack on the right earcup, which allows a single source to be shared between friends without a dedicated splitter.
Comfort (5.5/10): While the wide headband of the headphones is nice and plush, the cups fold inward but do not rotate. There is little flex in the structure to boot, meaning that the cups pretty much stay parallel to each other no matter what. The vinyl donut pads aren’t particularly stiff but the Plattan still gets very uncomfortable after a while, exerting lots of pressure on the wearer’s ears. With a bit more flex to the structure, the design could work, but as it stands the Plattan just won’t remain comfortable very long for most users.
Isolation (7/10): The tight clamping force and vinyl pads do have the potential for very good isolation but the lack of flexibility in the fitting mechanism makes it difficult to get a solid seal. Noise leakage is respectably low.
Sound (5.75/10): The sound of the Plattan is decidedly mainstream, which made picking the competition fairly straightforward. The MDR-770LP and MDR-PQ2 from Sony as well as the Pioineer SE-MJ71 all follow a similarly bass-heavy approach and compete well with the Urbanears. To be fair to the Plattan, it is not a bass monster – the bass falls into the realm of ‘enhanced’, but stops short of ‘overblown’. The bass of the Pioneers is a little deeper and definitely more forward and dominant overall while the Plattan is quicker and a little tighter. The Plattan also has better extension and control than the other mainstream sets, though it still isn’t anywhere near as tight or detailed as the MEElec HT-21 or Beyerdynamic DTX 300 p.
The midrange of the Plattan is warm and slightly forward. In comparison, the mids of the Sony MDR-770LP are more prominent and those of the Pioneer SE-MJ71 – more recessed. Clarity is similar between the Plattan and MDR-PQ2, beating out the 770LP and SE-MJ71 but not the MEElec HT-21 or Beyer DTX 300 p. The Plattan is guilty of a fuller overall sound and slight thickness of note but not nearly to the same degree as the Sony sets. It lacks a bit of mid-range clarity compared to more analytical portables but doesn’t quite overstep into ‘muddy’ as the 770LP does. The treble transition is smooth and the top end is very laid-back. The soft treble does make the Plattan a bit less balanced overall than most of its competitors but at the very least works to avoid harshness and sibilance. Treble sparkle is pretty much nonexistent and top-end extension is mediocre at best – the roll-off is gradual but starts early and adds up quickly.
Presentation-wise, the Plattan is again adequate but not outstanding. It does have a more spacious stage than the Pioneer SE-MJ71 but lacks the dynamics necessary to accurately portray distance. Instrument separation is average and layering is lacking slightly. Soundstage width is mediocre but the Plattan does perform better than the Sony MDR-770LP in terms of depth and height. Among similarly consumer-oriented headphones, its presentation is actually quite pleasant – not in-your-face like the SE-MJ71 but not boring or overly laid-back. It does well to avoid the cavernous soundstage feel and bass boom endemic to small closed headphones but won’t compete with similarly-priced open-back when it comes to overall realism.
Value (6/10): Underneath the flashy colors and retro styling of the UrbanEars Plattan lies a reasonably competent mid-range headphone. For a fashion brand, UrbanEars has obviously paid some attention to the choice of drivers as well as the feature set of the unit – a collapsible structure, pass-through 3.5mm output, in-line mic & remote, and an included stereo adapter (for devices that do not support 4-pole connectors) all make the Plattan a very versatile listening device. Unfortunately the same cannot be said about the fit – the structure lacks flexibility and the high clamping force is quite unforgiving. It is the comfort, or rather lack thereof, that makes the otherwise competent mainstream headphone a mediocre value.
Manufacturer Specs:
Frequency Response: 20-20,000 Hz
Impedance: 32 Ω
Sensitivity: 112 dB SPL/1mW
Cord: 3.94ft (1.2m), single-sided, with microphone & remote; Straight Plug
Space-Saving Mechanism: Collapsible