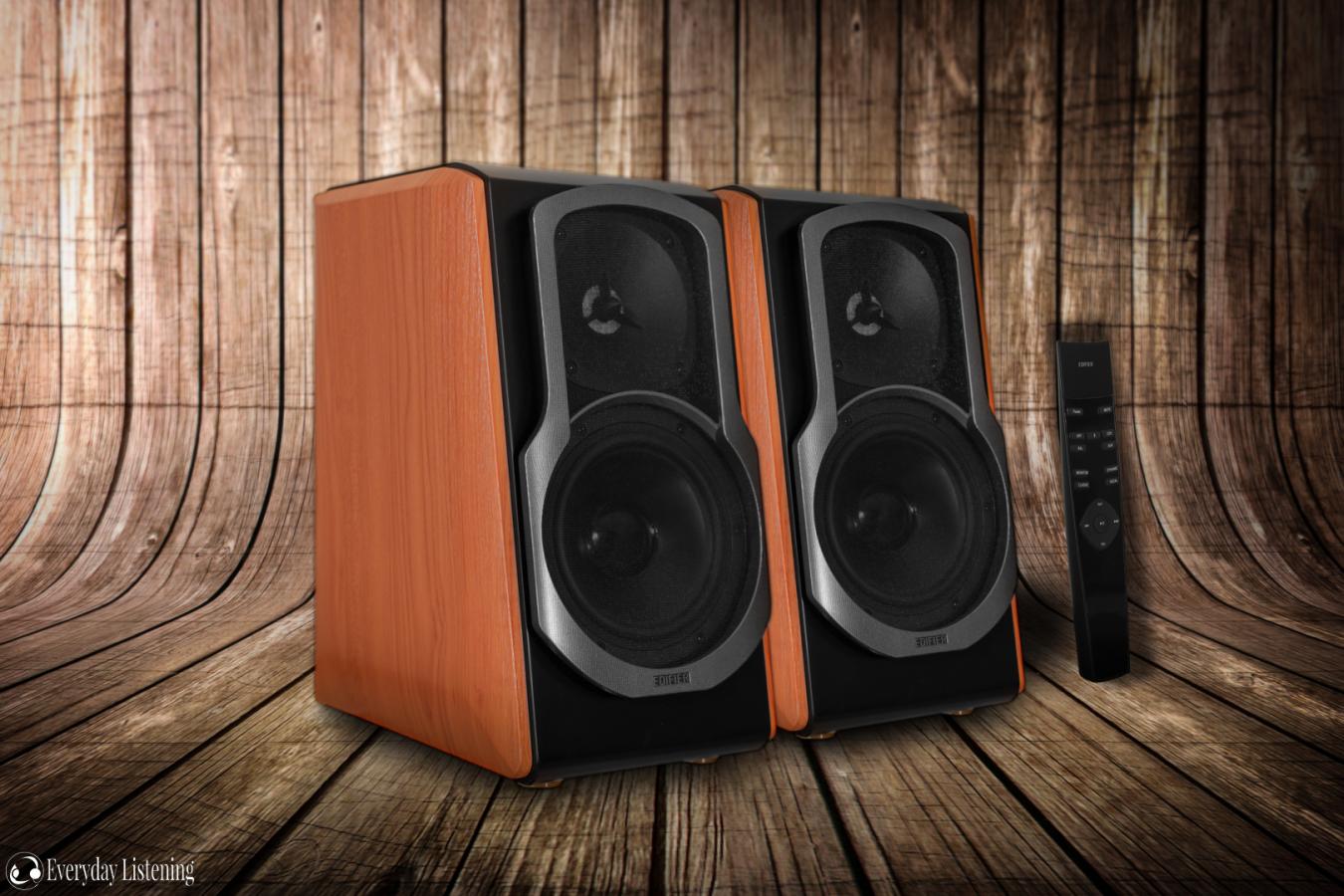 As before, the S2000 Pro is an active speaker with internal amplifier offering 124W RMS peak power. Though only 4W up from the S1000DB, keen-eyed buyers will note increased efficiency from the tweeters, consuming 12W as opposed to 25W per channel, permitting more power to drive the woofers, 50W from 35W. In listening, these changes are immediately apparent, the S2000 Pro carrying the torch a healthy stride forward in performance. The amplifier itself has also seen healthy gains in performance with high-quality Burr Brown DAC chips and new amplifiers from Texas Instruments offering a 94dB SNR up from 85dB on the S1000Db. Where the S1000DB presented perceptible hiss during listening, the S2000 Pro is almost completely clean, and the treble can be confidently turned up without introducing additional noise.

The S2000DB Pro uses the S1000DB as a solid foundation for further refinement. What can be heard here is a cleaner sound with greater depth, more accurate vocal timbre and more detailed highs. Edifier places emphasis on the monitor aspect of this speaker, insinuating balance and linearity. Compared to the warmer, more dulcet tones of the S1000DB, the S2000DB Pro does come across as more linear and tonally accurate. However, it still remains a slightly coloured speaker, bearing greater bass slam and slightly enhanced clarity. Nonetheless, it is a superbly balanced sound and the most technical we’ve seen from Edifier yet.

Four eQ settings can be managed from the remote, classic, dynamic, vocal and monitor. Classic is a U-shaped eQ, emphasizing the mid-bass and bringing a touch of additional warmth into the speaker’s sound in addition to increasing treble energy. Dynamic is V-shaped, retaining a clean tone but boosting sub-bass slam and treble clarity. Meanwhile, vocal, as its name suggests, brings vocals forwards and bass takes more of a backseat on this setting. Monitor is intended to be a flat eQ and it is effective as such, this is also the setting used to evaluate the speaker below. Note that all settings can be tweaked to individual preference using the bass and treble knobs on the speaker.

Lows extend very well, perceptibly more than the S1000DB. You don’t get that guttural subwoofer slam, however, one can very reasonably get away without one. These speakers easily fill larger spaces with full, impactful bass and they create a very convincing movement of air in smaller spaces. Tonality is excellent, with a slight sub-bass focus, clean mid-bass and very slightly recessed upper-bass, the S2000 Pro is dynamic, tonally accurate while maintaining excellent pace and engagement.

The driver has surgical control that enables the speaker, even on complex and faster-paced tracks, to keep pace effortlessly. As warmth is not excessive and note size just slightly enlarged, definition is also high as it bass detail retrieval. This is a richly textured low-end with pleasing depth and no shortage of punch on behalf of its tightness. The S2000DB Pro trades the smoother, warmer character of the S1000DB in favour of a more technical and linear approach true to pro moniker.

Edifier have always excelled within the midrange and the S2000 Pro provides the best presentation yet. Tone is dead neutral and transparency is tremendously good. By cleaning up the bass tone, the midrange is left room to breathe and excel. Subtle tweaks can, however, be observed. I hear a small rise through the centre midrange, bringing vocals slightly to the fore. Meanwhile, a small 4KHz dip imbues smoothness and density, with vocals sounding velvety and rich.

On the flipside, body is a touch thin, a by-product of the upper-bass dip that prevents bass from spilling into the midrange. In so doing, Edifier preserve a neutral midrange tone, however, vocals don’t sound as full-bodied as the S1000DB in return for greater clarity and transparency. Indeed, definition through the midrange is outstanding and vocals never come across as raspy or over-articulated as the upper-midrange and treble have been delicately tuned. The S2000 Pro has a very pleasing timbre while enhancing vocal clarity, you’d be hard pressed to spot deficiencies here.

The S2000 Pro implements a planar tweeter to provide a low-distortion sound. In terms of signature, the speakers have a slightly laid-back lower-treble, creating a smoother rendition of foreground instrumentation. As such, strings and cymbals can lack a touch of bite and attack, however, they are well-bodied and richly textured. Instead, the speakers focus more on the middle-treble, creating a more pristine sense of clarity and abundant air and headroom. And there is a modest upper-treble presence on top which grants a sparkle and micro-detail retrieval not observed on many speakers around this price.

Treble extension is excellent, with immense resolving power of the finest minutiae. The speakers have excellent detail retrieval in the foreground too even if it isn’t brought to the fore, instruments are most multi-faceted than cheaper units that provide the initial hit but fail to encapsulate the subsequent shimmer. Sparkles isn’t hugely exacerbated, but it is well-present within the mix. The background is not the cleanest as a result, however, this remains a coherent and well-balanced presentation as the magnitude of colouration is not large.

While this does depend on the placement of the speakers, the excellent treble extension of the S2000 Pro and its neutrally toned sound do make it especially easy to achieve a nuanced sound. Imaging is excellent, directional cues are sharp and vocals have a strong centre image. Although the background is not the darkest, layers are defined and instruments are clearly delineated from vocals. Separation is a speciality, on behalf of its neutral note size throughout and high driver control.

Edifier S1000DB ($350): Though visually similar and offering the same frequency range, listening reveals a different story; the S2000 Pro is a very appreciable upgrade to the already commendable S1000DB. Immediately, the S2000 offers greater bass extension and a tighter low-end with more detail, definition and texture. With its enhanced extension, the S2000 Pro places greater emphasis on sub-bass presence, thereby achieving impact without the need for excessive mid-bass. As such, the S2000Pro has more rumble and slam while simultaneously sounding cleaner in tone and offering more accurately sized bass notes. On the flipside, the more mid-bass heavy S1000 is warmer, slightly tubbier and its notes are less defined. This quality continues into the midrange where the S2000 Pro is again cleaner and clearer. It has more prominent vocals on behalf of a centre midrange rise while a dip in the 4KHz range imbues density and smoothness. As such, it sounds more refined than the S1000DB while simultaneously offering greater clarity. The S1000DB offers a more full-bodied sound with greater warmth and less clarity, its vocals also sit slightly behind its low end though this can be adjusted by using the bass tuning knob. Up top, the S2000Pro’s planar drivers give it a big leg up, and this is likely the largest difference in performance under scrutiny. The S2000Pro is more directional meaning the speakers must be level angled towards the listener where the S1000DB projects over a broader space, making them less placement sensitive for bookshelf application per say. However, when setup correctly, the S2000 Pro offers a more resolving listen with a noticeably more natural timbre.

Kanto YU6 ($399): The YU6 is a slightly smaller speaker with a more modern aesthetic. In line, it also has smaller 5.25” woofer drivers and utilises 1” silk dome tweeters driven by a more powerful 200W amplifier. The YU6 is more customizable in colour to suit each personal setup and offers more connectivity, a second optical input, phono input and a sub output. Though less powerful on paper, the larger S2000 Pro provides noticeably more bass extension. It has a more linear mid-bass, sounding cleaner and more defined where the YU6 has a smoother texture and a hint of additional warmth. Through the midrange, the YU6 presents as more clinical while the S2000Pro is more musical. Both feature a slight centre midrange bump that brings vocals to the fore, however, the YU6 is thinner in body and a touch denser while the S2000Pro is more linear from its more neutrally toned bass. This stems mostly from additional upper-midrange presence on the S2000 Pro that aids vocal extension and clarity in addition to greater lower-midrange presence on the S2000 Pro, making it a touch more linear overall. The high end is also fairly different, the YU6 being quite linear and smooth, the S2000 Pro being more aggressive and crisp on behalf of its middle-treble emphasis. Technically, there is little comparison with the S2000 Pro offering more extension, detail retrieval and resolving power in general. It also has sharper imaging and its presentation is more layered. On the flipside, the YU6 is more linear up top so it is less fatiguing during longer listening.

After reviewing high-end headphones and in-ears, I expected it to be more difficult to acclimatize to speakers. However, the S2000Pro blew me away and I honestly didn’t expect this level of balance and quality. The S1000DB was an easy recommendation at its ever-falling price, yet the S2000Pro, despite appearing similar in design and spec, carves out its own identity with its cleaner, more linear and more technical sound; with additional flexibility on behalf of its digital eQ’s. Having had the privilege to review all of Edifier’s Australian bookshelf speakers, the S2000 Pro also makes a case for their receptivity to concerns from previous models. Concerns with transparency and amplifier hiss on the S1000DB have been appended with a healthy dollop of extra quality and features on top. The S2000 Pro is also Edifier’s most versatile model yet, especially for those who have mixed-use cases. Furthermore, the S2000 Pro is cheaper than the S1000DB was on release at ~$470 AUD as opposed to $600. For those wanting something warmer and a bit more aggressive in the lower-treble, the S1000DB remains a well-performing option with the same gorgeous design at a lower cost. However, budget permitting, the new S2000 Pro provides the buyer with an even more balanced, dynamic and detailed sound.