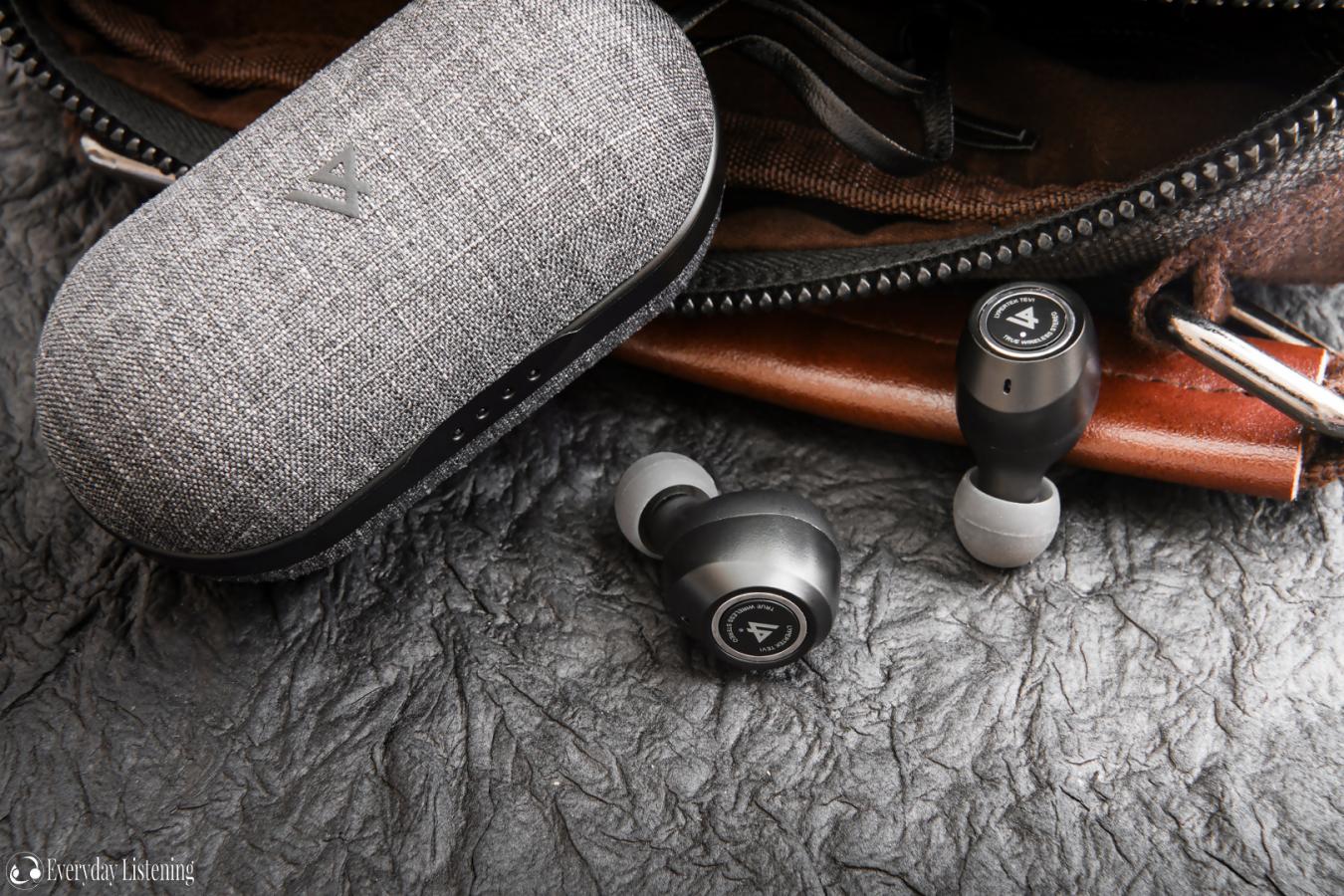 As I procured more TWS earphones, I expected to be less enamoured by the TEVI, however, further listening only strengthened my impression. These are incredibly well-balanced earphones, not just within the TWS space. They possess an accurate and neutrally toned low-end mated to linear lower-mids and a climb through the centre midrange that brings vocals a touch forward. As highs are smooth with only a small bump in the middle-treble redeeming crispness and headroom, the TEVI’s leaner presentation is never mired by glare or fatigue.

Lows extend well which, in culmination with light sub-bass emphasis, delivers solid slam and well-defined rumble. Mid-bass is dead neutral without a hair or emphasis while the upper-bass is lightly attenuated. The result is a shockingly neutral bass tone combined with accurate note size and excellent definition. This impression is reinforced by the TEVI’s excellent driver control, undoubtedly among the highest I’ve heard from a TWS earphone. The TEVI’s bass notes are highly defined with abundant detail that is rarely observed even from similarly priced wired earphones. Such a presentation remains dynamic and natural through accurate note decay. Though certainly not for bass lovers, the TEVI differentiates itself with its superlative accuracy and poise.

A neutral low-end provides more leeway for natural midrange tuning. In the case of the TEVI, this manifests as a climb to 3KHz peak before subsequent fall off through the upper-midrange and lower-treble. As the lower-midrange and mid-bass imbue sufficient body and the 4KHz region lies a touch behind, the TEVI is dense, well-bodied and naturally voiced. Vocals are a touch on the intimate side, however, they are refined and coherent without a hint of rasp, coolness or over-articulation, no doubt aided by the earphone’s smoother treble tuning. Though I would hesitate to call this a linear earphone, the TEVI does have a natural presentation overall alongside high perceived transparency. They possess an excellent timbre to both male and female vocals though instruments do appear slightly thin and this sound will not suit those wanting warmth and richness. Rather, it appeals to those valuing delicate and slightly intimate vocals without overwhelming forwardness or brightness.

The TEVI’s balanced tuning enables a modest treble tuning in turn. Specifically, the lower-treble is very smooth and attenuation continues into the middle-treble with only a modest rise higher up serving to redeem air, crispness and treble note clarity. As a result, percussive notes lack some attack, however, decay is reasonably natural and the TEVI provides an impressively open soundscape for a TWS earphone. As the foreground is quite smooth, the midrange is flattered with a more natural voicing than can otherwise be permitted. However, in return detail presentation can be inconsistent between tracks. Nonetheless, the middle-treble bump does result in a well-detailed image and though it is slightly brought forward by comparison to the foreground, the earphone avoids overt brightness while upholding an airy and nicely open background. Extension is respectable though micro-detail and sparkle are not widely apparent as with most competitors. Ultimately, the TEVI’s high-end is clean and exudes impressive composure, inoffensive yet simultaneously offering pleasing excitement and energy.

With solid treble extension, the TEVI achieves fairly impressive soundstage expansion for a TWS earphone. Still, there are cost point and technological limits at play. Width stretches to the periphery of the head while depth has fairly impressive projection alongside a strong vocal centre image. Layers aren’t hyper-defined as there isn’t large foreground/background separation, however, vocals and instruments are clearly delineated. Imaging serves the TEVI’s sound well, with sharp directional cues, though the earphones do tend to condense instruments at the sides which can compromise a perfectly realistic and immersive image at times. Separation is excellent on behalf of the TEVI’s neutral tone and note size throughout in addition to strong driver control.

Earfun Free (Oluv) ($50): Tuned by reviewer Oluv, the special edition Free provides a very coherent sound. Nonetheless, it is clearly sculpted with a moderate bass emphasis and smooth high-end. At such a reduced cost, the driver quality is also clearly not there. The TEVI is more balanced throughout and has more sub-bass extension, the Free has more mid-bass presence but lacks a lot of definition and control, sounding overly-smoothed over. Through the midrange, both sound very natural, the Free has a touch more warmth balanced out by a more present upper-midrange, where the TEVI is more transparent and its vocal presence is more balanced with its low-end. Both have a smooth lower-treble and bump in the middle-treble for headroom, the TEVI has a lot more extension, sounding more open and expansive where the Free sounds well-textured and bodied but truncated and rolled-off.

Astrotec S80 ($70): The S80 provides a substantially warmer sound on behalf of its more present sub and mid-bass in addition to increased warmth through the midrange. It doesn’t possess the same level of control and cleanliness, as expected, it is not as detailed through the bass though it does offer a lot more power and impact in return. The S80 has a warmer, fuller midrange. It is more organic than the TEVI but not as transparent and with both less vocal clarity and presence. The S80 has more lower-treble presence, sounding crisper with more present foreground details. On the flipside, it has a sharp drop through the middle-treble which grants it a very dark background and impressive layering, however, the TEVI has a lot more air which works alongside slightly stronger extension and a larger soundstage.

Adv M5 TWS ($200): The M5 TWS provides a brighter sound and more technical ability. The M5 provides more sub-bass extension but also less emphasis. It has a hair more mid-bass but also noticeably less upper-bass, sounding very clean and slightly more controlled. As such, it provides higher detail retrieval and separation than the TEVI. The M5 has a touch more vocal presence and noticeably more clarity though they aren’t quite as linear as the TEVI. In particular, there is less body as the upper-bass is recessed and slightly more centre midrange emphasis means the M5 doesn’t sound quite as natural as the TEVI. Both earphones have a 4K dip, the TEVI to a larger extent, forming its smoother presentation. Meanwhile, the M5 climbs back to a more prominent lower-treble that grants it a more detail forward sound. The M5 also extends more linearly into the middle and even upper-treble to some extent. It delivers more headroom and detail retrieval. It has more accurate imaging and treble instrument timbre due to its more linear top-end.

Somewhere along the way, I gave up on finding a TWS model like the TEVI; a fully wireless earphone that caters specifically to the audiophile. There are abundant offerings, however, very few at such an attainable price and with such a focus on balance, refinement and moderation. With excellent battery life, the most balanced signature I’ve heard from a TWS earphone and reliable connectivity, the TEVI is a true winner. It offers respectable call quality alongside simply controls and waterproof housings. Build quality isn’t spectacular nor is fit stability its strongest aspect, however, this is partially resolved with proper tip selection. The TEVI is clearly not the strongest choice for lovers of meaty, impactful bass, though strong noise isolation, max volume and subtle low-end emphasis ensure that it works well as a commute earphone. The TEVI is an immensely versatile earphone that targets the audiophile but will be sure to impress the majority.